Gods and Demons Wiki
Register
Don't have an account?
Sign In
Advertisement
in: Beings, Deity, Creator,
and 11 more

Izanagi-no-Mikoto, simply known as Izanagi, is the Shinto primordial creator deity of the Earth (specifically Japan). He is the brother and husband of the underworld goddess Izanami along with being the father of Amaterasu, Tsukuyomi, Susanoo, and countless other gods.

As father to the chief gods of Heaven, Izanagi was the original ruler of Heaven and trained his daughter Amaterasu to take the throne. While he still maintains some authority, Izanagi has bequeathed most of his power to Amaterasu, who now serves as the true ruler of Heaven. He, along with his wife Izanami, is the Demiurge of creation, the creator god of the Shinto pantheon.

Izanagi defends against the forces of Yomi, and ensures there are more births than deaths each day in order to preserve his creation. He often wields Ame-no-nuboko, the heavenly jeweled spear with which he churned the primordial seas.

He is the father of many Shinto rituals as well, including marriage and Misogi. The latter ritual is central to Shinto beliefs and uses water to wash away impurities, such as the death and rot Izanagi encountered while in the underworld.

Birth of the Lands

Izanagi and his sister-wife Izanami are the seventh generation of Kamiyonanayo and the children of Omodaru and Ayakashikone. From the void came Heaven and Earth, but in the beginning, however, only Heaven was populated. Seeing that Earth was untouched, the primordial deities gave their blessings to Izanagi and Izanami to fill it with life. Together with Izanami, the Female Who Invites, they were given the task of creating the world.

Standing at the pillars of heaven, the siblings used the spear Ame-no-nuboko to churn the sea, and from this churning came the first islands of Japan. In the wake of this achievement, the two saw their bodies complemented one another, and Izanagi proposed to Izanami so they might procreate. Izanami agreed, and the two began to prepare for the marriage ceremony. Standing on Ama-no-Ukihashi, the floating bridge of the heavens, they plunged a jewel crested spear into the ocean. When they pulled it free, the water that dripped from the spear coagulated and formed the first island of the Japanese archipelago.

Izanagi and Izanami performed the first marriage ceremony by walking around the pillars of heaven and meeting in the center. In the initial ceremony, Izanami spoke first; this was out of line, however, and caused the marriage to be improperly sealed. The children born of this union were illegitimate and deformed as a result. They performed the marriage ceremony once more, this time with Izanagi speaking first. With their marriage sealed properly this time, Izanagi and Izanami gave birth to the remaining Japanese islands as well as a host of gods - the first legitimate kami.

They drew the islands of Japan from the sea; in this way, the two deities effectively gave birth to the islands, which in turn are considered to be their children. The islands in this creation myth are generally thought to be Kyushu, Shikoku, and Honshu, as well as the smaller islands that surround them. Izanagi then fathered the first great generation of kami, culminating in the birth of the fire god Kagutsuchi, who killed Izanami.

Here the first gods and humans were born. When his wife died giving birth to Kagutsuchi and burning her severely, Izanagi went to the underworld to retrieve her, but she refused to come back with him and they parted forever. In despair, Izanagi set out for Yomi-no-Kuni, the Land of the Dead. This land was defiled and impure, full of demons and other monsters. When Izanami died, Izanagi tried to retrieve her from the underworld, but failed. He mistakenly looks at her while she's in a rotting, monstrous state in the underworld, which shames her and she attempts to kill him.

Knowing Izanami would devour the world if she escaped Yomi, Izanagi placed a giant boulder at the mouth of the underworld in order to prevent her return. Furious, Izanami cursed the world, saying she would kill a thousand people each day. Izanagi responded by vowing one thousand five hundred people would be born each day.

When Izanagi returned from the underworld, he started the first cleaning rites. He washed his left eye and thus created the sun goddess Amaterasu. When he washed his right eye, the moon god Tsukuyomi came forth. From his nose he created Susanoo, the god of the seas and the storms. He is the father of countless kami and the bureaucracy of the heavens, over which his daughter, the sun goddess Amaterasu, presides.

After much guilt and repentance, Izanagi decided that he had to bring Izanami back from Yomi. However, for that, he would need to confront Izanami, who he knew at that moment hated him more than all things in creation and even being more strong as she was, Izanagi couldn't hit her sister, and "has already hurt her too much". So, he decided he needed help, and for that, he prayed to the Creator, something that was seen as rare, a Shinto god praying to an Abrahamic entity, but he knew that God was the one who guides both humans and other entities to the path of forgiveness and repentance.

God then appeared in His avatar Shekhinah and said He was going to help Him to reconcile with His wife, but for that Izanagi must also do his part. Finally, the Shekhinah removed the rock that impeded Yomi's exit, and the Shinto god of creation entered the infernal paradise again. After meeting, Izanagi asked Izanami's forgiveness, the two finally reconciled and returned together to Earth, Shekhinah on the other side healed Izanami's appearance causing her to regain her former appearance.

Scholars have noted that the tale of Izanagi and Izanami in Yomi is very similar to the Greek tale of Orpheus and Eurydice, though Izanami's eating of the food of Yomi and her subsequent damnation are elements more akin to the myth of Hades and Persephone. As a ruler of Heaven, Izanagi has many similarities to other East Asian divine creators and first emperors. He differs from them, however, in both his abdication of the throne and his seeming immortality.

Izanagi and Izanami when they arrived on earth (Art by GENZOMAN)

Izanagi and Izanami (Art by Gukkhwa) 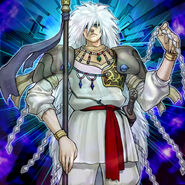