Gods and Demons Wiki
Register
Don't have an account?
Sign In
Advertisement
in: Beings, Deity, Creator,
and 14 more

Izanami-no-Mikoto, simply known as Izanami, is the Shinto primordial deity who is the twin-sister and wife of Izanagi. She is the co-creator deity of Earth of the Shinto pantheon and mother of many Japanese deities. After her death, she became the goddess of the underworld in this case being the realm of Yomi.

Izanami is the Goddess of Creation and Motherhood, being the mother goddess of the Shinto pantheon and the co-founder of the universe and Earth, having brought order to the planet along with Izanagi using the Amenonuhoko, a powerful spear forged in the Heavens, with the blood of the creator deity Izanagi.

In her original appearance, she was a beautiful woman with fair, delicate skin and long, dark hair. Her beauty was such that she even enchanted her twin brother, Izanagi, who also had great beauty, with the two relating to each other.

Izanami's common appearance in ancient times was that of a young Japanese woman, with short graying hair, fair skin and bloodshot eyes. Izanami's appearance was rather thin, though curvy, giving her a more androgynous appearance. Their clothes were usually white tunics with red accents. When Izanami fell and became a "demon", her appearance changed drastically, with his body now rotting and having several open wounds with maggots and insects crawling in them, giving her a corpse-like appearance, with eight thunders coming out of her body, giving her a hideous and frightening appearance in contrast to her former goddess beauty.

As a "demon", Izanami manifests as a frightening and sinister woman, with pale skin representing death, with dark hair and eyes with black sclera and golden irises, possessing an attractive and mature figure. Her clothes are in the same Japanese style, like a kimono, but very worn, with several rips in the clothes exposing her skin. In her current human form, Izanami appears as a beautiful fair-skinned woman with very long black hair, possessing a very attractive figure even by the standards of pagan gods of beauty such as Asherah or Aphrodite. Her outfit consists of a white or red kimono.

Creation of the World

The first gods Kunitokotachi and Amenominakanushi summoned two divine beings into existence, the male Izanagi and the female Izanami, and charged them with creating the first land. To help them do this, Izanagi and Izanami were given a spear decorated with jewels, named Amenonuhoko (heavenly spear). The two deities then went to the bridge between heaven and earth, Ame-no-ukihashi ("floating bridge of heaven"), and churned the sea below with the spear. When drops of salty water fell from the spear, Onogoro was created. They descended from the bridge of heaven and made their home on the island.

Izanami helped stir the oceans on the Bridge of the Heavens, and settled down with Izanagi on Earth during the year 60,000,000 BCE, along with other gods such as Zeus, Odin, El, Brahma, among others, with the pair of twin gods settling in the east, more specifically in the region where present-day Japan is located, on their island.

Eventually they wished to be wed, so they built a pillar called Ame-no-mihashira ("pillar of heaven") and around it they built a palace called Yahiro-dono. Izanagi and Izanami circled the pillar in opposite directions and, when they met on the other side, Izanami spoke first in greeting. Izanagi did not think that this was proper, but they mated anyhow. They had two children, Hiruko ("leech-child"), who later came to be known in Shintoism as the god Ebisu, and Awashima, but they were born deformed and were not considered deities.

They put the children into a boat and set them out to sea, then petitioned the other gods for an answer as to what they did wrong. They were told that the male deity should have spoken first in greeting during the marriage ceremony. So Izanagi and Izanami went around the pillar again, this time Izanagi speaking first when they met, and their marriage was finally successful.

The two gods lived for thousands of years on Earth, but then she gave birth to Hi-no-Kagutsuchi, the Deity of Fire, and died from the severe burns of the flames. Izanagi was so angry at the death of his wife that he killed the newborn child, thereby creating dozens of deities. She was then buried on Mt. Hiba, at the border of the old provinces of Izumo and Hōki, near modern-day Yasugi of Shimane Prefecture.

When she perished, she went to Yomi, the Land of the Dead, a place similar to Hell, filled with of pain and suffering. Izanami ate from the furnace of Hell, as a result, the Goddess was trapped in Shinto Hell. She went to petition the deities of the Netherworld to let her go.

When Izanagi went to get his wife, she made her husband promise not to look at her, while she was occupied. However, while Izanami was sleeping, Izanagi disobeyed by taking the comb that bound his long hair and set it alight as a torch. Under the sudden burst of light, Izanagi was greeted by the sight of the horrid form of the once beautiful and graceful Izanami with the Eight Thunders protruding from her body. She was now a rotting corpse of flesh with maggots and foul creatures running over her ravaged body. Crying out loud, the scared Izanagi could no longer control his fear which caused his death-ridden wife to wake up.

He was scared by his wife's appearance and left Yomi. Ashamed by Izanagi's indiscretion, she sent the Yomotsu-Shikomes, the Thunders and Yomotsu-Ikusas after him. Izanagi sealed the entrance to Yomi with a boulder. After that day, Izanami cursed the Earth, vowing to kill 1,000 living beings every day, with Izanagi responding to his wife's threat by saying that every day he would create 1,500 more living beings, and thus their marriage was over. She became the Yomotsugami, the Goddess of the Land of the Dead.

Izanami in Yomi (Art by Arisia19)

Izanami before the fall (Art by Jeleynai)

Izanami after the fall (Art by Noxypia)

Izanami and her other self (Art by DasGnomo)

Izanami as the Goddess of Death (Art by Remontant)

Izanami and her husband Izanagi (Art by AmeBiYue)

A young Izanami (Art by Lycorine) 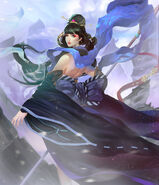