Gods and Demons Wiki
Register
Don't have an account?
Sign In
Advertisement
in: Beings, Deity, Creator,
and 11 more

The Jade Emperor, also known as Yù Huáng, is one of the representations of the first god in Chinese mythology, as well as the God-King of the Chinese Heavens.

In Daoist theology, he is the assistant of Yuanshi Tianzun, who is one of the Three Pure Ones - the three primordial emanations of the Tao. He is known as Cao Đài or Ngọc Hoàng Thượng Đế in Caodaism. He is identified with Śakra in Chinese-Buddhist mythology and with Haneullim in Korean mythology.

Known as the highest Deity of the Chinese pantheon (second and next only to Gautama Buddha), the Jade Emperor is a strict adherent of the celestial laws of the Heavenly palace and the moral code of the Council of Godheads. He prioritize the peace and prosperity of the Chinese Heavens, as he will punish those who deliberately rebels and defy the laws of the heavens.

The Jade Emperor, however, according to many (both deities and mortals) views and considers him a benevolent, righteous, and just ruler and deity. He is fair to his rule, and traits his subjects as equals, the Jade Emperor is also highly humble and quiet immodest, as he is not bothered to any behavior that can offend a god or behavior that seems to be appropriate in the eyes of the deities. Even the likes of Sun Wukong who is known to be very mischievous, rebellious, and disrespectful towards the gods of the Heavenly palace, earns his respect. The Jade Emperor in turn is amuse to his naughty and playful natures.

Because of his noble, benevolent, and many heroic deeds, the gods and humans (in ancient Asia) proclaimed the Jade Emperor the supreme sovereign of all. So much that during his birth, he emitted a wondrous light that filled the entire kingdom. When he was young, he was a very kind, intelligent and wise person. He devoted his entire childhood to helping the needy (the poor and suffering, the deserted and single, the hungry and disabled). Furthermore, he showed respect and benevolence to both humans and creatures. After his father died, he ascended the throne. He made sure that everyone in his kingdom found peace and contentment.

He is a ruler that has high sense of justice and impartiality, he strongly against any injustice or senseless violence. Yet he is merciful and can show compassion, even towards the demons. In battle he is very skilled and formidable fighter, the Jade Emperor is also a very skilled and calculating leader, tactician, and strategist, he finish battles as quickly as possible and doesn't want to draw any senseless fights. He can be very cruel, cold, and calculating, yet he is honorable enough to spare his opponent's life if they are no longer has the strength to fight back. Compared to any chief deities of various pantheons, he is one of the gods that rarely exhibits his superior status and arrogance (unlike Zeus or Odin). He doesn't like any form of treachery, betrayal, or rebellious actions, and any betrayals against him will receive heinous punishment.

The Jade Emperor considered to be among the most powerful Deities on Earth, he is revered by many and he is strong enough to rival the likes of Zeus, Odin, and Ra in terms of raw strength and magical power. His power is more than enough to wipe out an army of demons and monsters, he also holds absolute authority and lordship over all deities of the Chinese pantheon, including the 28 constellations, four Heavenly Kings, Prince Nezha, and even Erlang Shen. During the ancient times of Earth his power is further demonstrate that he single handedly defeats and imprison an army of demonic entities that came from the darkness of chaos, he even put a good fight and successfully defeat the Primordial Deity of darkness and evil Amatsu-Mikabushi, an entity that far exceeds the powers of many gods, that came from Khaos. By mastering his 3.200 trials, completely attaining godhood and divinity, and ascend himself on the throne of the Heavenly palace and proclaimed himself as the supreme emperor of Heaven.

It was said that the Jade Emperor was originally the crown prince of the kingdom of Pure Felicity and Majestic Heavenly Lights and Ornaments. At birth, he emitted a wondrous light that filled the entire kingdom. When he was young, he was kind, intelligent and wise. He devoted his entire childhood to helping the needy (the poor and suffering, the deserted and single, the hungry and disabled). Furthermore, he showed respect and benevolence to both humans and creatures. After his father died, he ascended the throne. He made sure that everyone in his kingdom found peace and contentment. After that, he told his ministers that he wished to cultivate Tao on the Bright and Fragrant Cliff.

After 1,750 eons, each eon lasting for 129,600 years, he attained Godhood. After another one hundred million years of cultivation, he finally became the Jade Emperor.

In the beginning of time, the earth was a very difficult place to live, much harsher than it is now. People had to deal with a variety of monstrous beings, and they didn’t have many gods to protect them; in addition, many powerful demons were defying the gods of heaven. The Jade Emperor was an ordinary god who roamed the earth helping as many people as he could. He was saddened because his powers could only ease the suffering of humans. He retreated to a mountain cave to cultivate his Tao. He passed 3,200 trials, each trial lasting about 3 million years.

On earth at this time, a powerful, evil entity had the ambition to conquer the gods in heaven and proclaim sovereignty over the entire universe. This evil entity also went into retreat and meditation to expand its power, though later than the Jade Emperor did. He passed through 3,000 trials, each trial lasting about 3 million years. After its final trial, it felt confident that no one could defeat it. It re-entered the world and recruited an army of demons with the purpose of attacking heaven.

The gods, being aware of the threat, gathered themselves and prepared for war. The gods were unable to stop the powerful demon and it defeated them all.

The Jade Emperor finished his cultivation during this war. When he was changing the land to make it more liveable for men and repelling a variety of monsters, he saw an evil glow radiating from heaven and knew something was amiss. He ascended and saw that the evil entity was too powerful to be stopped by the gods. He challenged it, and they fought. Mountains shook and rivers and seas toppled. Due to his deeper and wiser cultivation, his benevolence instead of his might, the Jade Emperor won the battle. After the evil entity was defeated, its army was scattered by the gods.

Because of his noble and benevolent deeds, the gods and humans proclaimed the Jade Emperor the supreme sovereign of all.

The Cowherd and the Weaver Girl

The Jade Emperor has a daughter named Zhinü. She is most often represented as responsible for weaving colorful clouds in the heaven. She is the Goddess Weaver, daughter of the Jade Emperor and the Celestial Queen Mother, who weaves the Milky Way, which gives light to heaven and earth.

Every day Zhinü descended to earth with the aid of a magical robe to bathe. One day, a lowly cowherd named Niu Lang spotted Zhinü as she bathed in a stream. Niu Lang fell instantly in love with her and stole her magic robe which she had left on the bank of the stream, leaving her unable to escape back to Heaven. When Zhinü emerged from the water, Niu Lang grabbed her and carried her back to his home.

When the Jade Emperor heard of this matter, he was furious but unable to intercede, since in the meantime his daughter had fallen in love and married the cowherd. As time passed, Zhinü grew homesick and began to miss her father. One day, she came across a box containing her magic robe which her husband had hidden. She decided to visit her father back in Heaven, but once she returned, the Jade Emperor summoned a river to flow across the sky, which Zhinü was unable to cross to return to her husband. The Emperor took pity on the young lovers, and so once a year on the seventh day of the seventh month of the lunar calendar, he allows them to meet on a bridge over the river.

Once a great drought had spread across the land. Four dragons from the sea noticed the plight of the people and traveled to beseech The Jade Emperor in the Heavenly Palace to bring the rains to the people. He was very busy ruling the heavens, earth, and sea and distractedly agreed to the send the rains on the next day if they would return to the sea, but soon after the dragons departed, he forgot his promise.

After ten days, the rains still did not come and the people began to die of starvation. The dragons could not simply stand by and do nothing, and so they decided to use their bodies to capture great masses of water from the sea, taking it upon themselves to bring the rain. The people were grateful and prayed their thanks to the Jade Emperor, who soon discovered what the dragons had done, and became angry that they intervened without his blessing.

The Jade Emperor ordered Mountain God to trap the four dragons. However, from each mountain that trapped a dragon there sprung a new river. From Yellow Dragon came the Yellow River, from Long Dragon the Yangtze River, from Black Dragon the Amur River, and from Pearl Dragon the Pearl River. The rivers thereafter flowed from west to east and north to south, the dragons ensuring that the peoples of China would never be without water again. 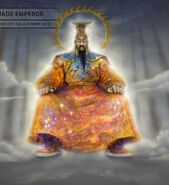