Gods and Demons Wiki
Register
Don't have an account?
Sign In
Advertisement
in: Beings, Demon, Archdemon,
and 5 more

Jedah Dohma is a demon Darkstalker who is the head of House Dohma from Makai and is the creator of the merged realm Majigen.

Jedah Dohma was born at 4045 BC, with the height of 7'1" (216 cm) and weighing about 24 to 2209 lbs (12 to 1002 kg). Although he is over 6000 years old, he is the youngest out of the three High Nobles of Makai. He also created the realm of Majigen, and currently serves under the demon lord Lucifer as his advisor. All of Jedah's attacks are unusually gory, using his blood to attack enemies. Jedah's own abilities and his interests in souls and the ability to travel to other realms is similar to that of a Shinigami.

The youngest of the three high nobles, Jedah was the one most concerned about the future of Makai. Believing that under the rule of Belial, it would be stagnant, Jedah sought every chance he could that would help in overthrowing Belial. Ozom, his adviser, suggested to absorb the leaking energy of the Gate, a distortion that connects Makai with the human world. While Jedah was absorbing the leaked energy, Ozom discovered that if he opened the gate further, it would leak so much energy that it would overload Jedah and kill him. So he decided to overthrow him right then and there, and just like he predicted Jedah couldn't handle it. Ozom then collected what was left of Jedah's power and proclaimed himself Emperor of Makai.

100 years later, Jedah managed to revive himself. Seeing the state of Makai at the peak of a power struggle, he decided that in order to save it he must cleanse all the souls in Makai, and for this he created the Majigen (using Ozom and the his Castle, formerly Jedah's, as a foundation), the pocket dimension where the strongest of souls will gather.

He has an unique appearance of a thick body suit that shows his muscular body. His hair is not shown completely, hidden by a headdress that has a bat-like appearance and he has long and retractable finger nails as well as wings that have a metallic appearance.

Jedah Dohma is a sinister person with the desire to control others, he can often come across as a relaxed, collected and intelligent supernatural being. He has a degree of arrogance in his skills when it comes to a human and enjoys tormenting them, as he is the one who sent out his group of Darkstalkers to attack Hsien-Ko's loved ones for his own amusement.

He is focused in achieving his goal of controlling Makai and humanity from a destiny seen by the former king of Makai. Jedah will display negative emotion by showing short fits of rage when his plans are being interfered with and those who are against his views such as Jon's father, but even these are quickly subdued by his demeanor. Jedah is fairly laid back and very easygoing with other supernatural beings who can hold their own long enough to make deals with him. It is rare to see Jedah express emotion, except in fits of insanity. But even these are subdued by his own calm attitude eventually.

Jedah, however, can still be loyal to beings he believes deserves their power which is shown with Lucifer.

Being an S-Class Darkstalker, Jedah is one of the most dangerous supernatural beings in Makai and an especially powerful demon.

His liquid body allows him to change shape which is shown when later on becomes a more humanoid form instead of his more monstrous form. He also has the power to absorb souls from humans which in turn increases his own strength and is presumed to communicate with supernatural beings from other realms and influencing the darkest parts of a person's souls, he has no need to sleep, eat drink, nor tire, at the limit of his power, he can create a space-time continuum, this however leaves him weakened and must regrow his strength. He can also travel through dimensions and enter many different realms without any issue.

The blood inside his body can change colors as it can harm humans and even some supernatural beings. Jedah's usage of his blood is very versatile as he can turn torrents of blood into jagged blades and dark energy and, more notably, into his trademark attacks by turning his blood into a rotating buzz saw. In addition, he can pump his enemies full of blood until their cells are destroyed from the inside and summon large supernatural hands to ensnare and attack his enemies. He can even fight with his blade against his foes and can mutilate any of his body parts without suffering any ill-effects, as he has a healing factor that allows him regenerate missing limbs instantaneously. He is fond of contorting his wings for flying and can turn them into weapons, such as forming them into spinning blades, scythes or use them as shields. He doesn't really use punches or kicks, instead relying on his wings and claws. He can use his blood to split his limbs extend his attack range, extending his claws towards his foes to pierce them.

Jedah was always concerned about the future of Makai. He believed that if Makai was left to rule by Belial Aensland, the master of House Aensland and the true ruler of Makai, then it would fall into chaos. Belial would most likely say that is destiny and life. To Jedah, Belial was a being who is not fit to rule. He looked for an opportunity to destroy Belial and waited for the right time to strike as a means to control the realm for himself. He lived in Dohma Castle with the Soul Bees living in the lands of House Dohma.

After the fall of Galnon, the master of House Voshtal and the oldest of the three high nobles, Jedah had a confidant named Ozom. The reason he came to Jedah was to be able to collect souls. As a noble, his skills were second class, but his ability to trick others and pain tactics was first class, as he was a genius in tactics. Ozom advised Jedah about using the gate of Makai. Jedah, being confident in his ability to absorb souls, agreed to this, telling Ozom to break part of the seal to open the gate wider.

When Ozom arrived at the gate, he felt the enormous power that lay within it. He realized that even Jedah would destroy himself if he absorbed all this energy at once, and saw this as his chance to take over the throne and the realm for himself. He tricked Jedah and told him that he must destroy all the seals because of the little energy that was coming out. After destroying the seals, he ran off to the far reaches of Makai. The fall of Jedah meant his rise in power and the success of his plan. Though Jedah's power was greater than Ozom predicted, he was still destroyed due to the sheer amount of power that was coming out.

Ozom gathered the remaining power and stored it in the Dohma Castle, becoming the new master of the Dohma family: Emperor Ozom. During the time, Jedah was dead, the Soul Bees was on the verge of being wiped out.

After a century long sleep, the demon Belial along with Moloch and Sitri had went to Makai to revive Jedah Dohma under the orders of Lucifer to bring him and House Dohma on their side.

They succeeded so Jedah was revived in Makai. After thanking them for being revived and making the deal, he went back and then felt concern towards the realm Makai, with nobles fighting each other. Instead of anger, he felt pity towards Ozom. Jedah had already made up his mind: his complete revival and the cleansing of all souls. For this, a new stage was necessary, a new realm, the Majigen. Jedah arrived at Dohma Castle and extended his hand to Ozom. Although his powers were not yet completely restored, he had enough to remove Ozom. Ozom had become a spineless gourmet, and he was full of fear by Jedah's return. Jedah quietly whispered to Ozom "Ozom... I am sorry, but please lend me your powers. Your soul will become the foundation of Majigen and will help the future of Makai."

Dohma Castle was taken into a dark space along with Ozom. This was the beginning of Ozom's salvation. Jedah believed that he was the one that needed to recreate life by fusing all souls into one life form: the Shintai. To do this, he summoned all those with worthy souls to enter his new realm as a way to control humanity. Along with being assisted by Belial and his other two saviors, he started ripping apart reality to bring many supernatural entities mostly from Makai with Primordials watching the entire event with intrigue. He was also able to gain many allies to assist him as well including the Q-Bee when she noticed the vast amount of souls in Majigen to fuel her Soul Bees' hunger and her own hunger as well.

He also was able to create a physical body for Lilith Aensland. In return, Lilith was to lure Morrigan Aensland and the other Darkstalkers as Morrigan's true powers were something that Jedah could not overlook. Demitri Maximoff's castle had also enter the realm, which made Demitri fight Jedah after realizing that Jedah would have destroy all life to succeed. While Demitri was a powerful Vampire, he still couldn't fight Jedah and so was believed to be killed by the dark savior.

When Lilith realized what Jedah was truly doing, she attacked him before being easily pushed aside. When Morrigan saw that Lilith was dying, she, after Lilith allowed her, had fully combined with her remaining soul. This power was so great that Morrigan was able to defeat and seemingly destroy Jedah, ending his reign of terror over all worlds.

Despite this, due to his ability to revive after a period of time, the threat of Jedah does not end with his death. In truth, only the Majigen was destroyed as once again Belial, Sitri and Moloch had saved him once again with Jedah willing serving Lucifer as his advisor as he believed that Lucifer was a better leader than Belial Aensland.

Jedah Dohma is a fictional character originating from the 1997 arcade game Vampire Savior: The Lord of Vampire, the third game in the Darkstalkers series.

Jedah's connection with the Shinigami

In Asian myths, a Shinigami, the Japanese God of Death, is a supernatural being that guides souls to many different realms. They are commonly synonymous with the Grim Reaper, and is considered a similar being. Jedah's abilities and his interests in souls and the ability to travel to other realms is similar to that of a Shinigami, and is the Darkstalkers' interpretation of such mythical creatures of lore.

(Art from Vampire Savior: The Lord of Vampire)

Jedah appearing before Morrigan and Demitri (Art from Cross Edge)

Jedah after being revived (Art from Vampire Savior: Tamashii no Mayoigo) 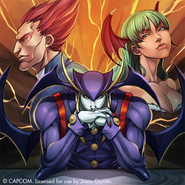 Jedah being focused and patient (Art by Gunship Revolution) 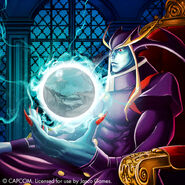 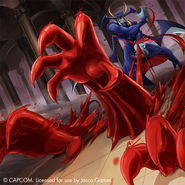 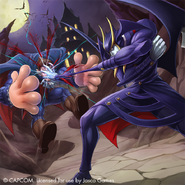 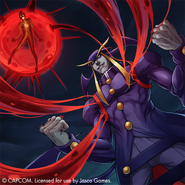 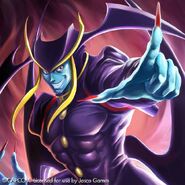 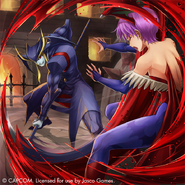 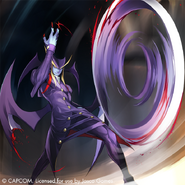 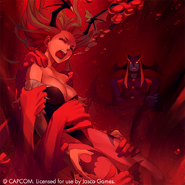 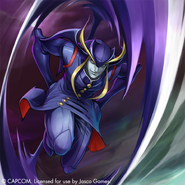 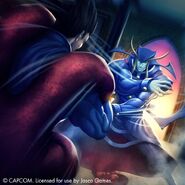 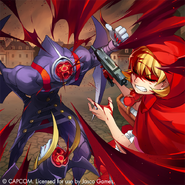