Gods and Demons Wiki
Register
Don't have an account?
Sign In
Advertisement
in: Beings, Abrahamic, Deity,
and 8 more

Jehovah is one of many avatars of God, personifying one of His thousands of names and being perhaps the closest physical avatar God has ever used.

Jehovah was the Avatar used by God during the New Testament to appear to His beloved Son, Jesus Christ. As God is ineffable, unspeakable and inconceivable, He needs an Avatar to manifest himself on Earth, and one of those avatars was Jehovah, perhaps being the closest physical avatar that God has ever used as a vessel.

One of the manifestations of God the Father in the New Testament was in the river where the Enlightened One was baptized, when the Holy Ghost appeared flying above the Savior and a mighty Voice was manifested in Heaven saying "This is my beloved Son, in whom I am well pleased."

Another manifestation of God the Father through Jehovah was during the Transfiguration on Mount Tabor, where Jesus revealed His divine identity shining like the Sun and Moses and Elijah appeared with Him and, to the surprise of the apostles, Peter, James and John, a voice came out. in a light in Heaven saying "This is my beloved Son, in whom I am well pleased; hear ye him".

Another manifestation of Jehovah was after the Ascension of the Messiah to Heaven, when God through Jehovah appeared along with His Son, Jesus, to the prophet Joseph Smith Jr., the founder of Mormonism. The main characteristic of Jehovah in relation to the other avatars of God, is that he is totally physical, being literally a Deity of flesh and blood, being able to interact directly with the physical world. Jehovah, due to being used in the manifestations of Yesh in the New Testament, is considered the God of Christianity, the Father of the Holy Trinity, and the God of Mormonism.

Unlike most of all other God's avatars, Jehovah is one hundred percent physical, possessing flesh and blood. He is like a physical being with the powers of a primordial deity. Because of this, Jehovah's body is very human, being perceived as a man with short white hair and an equally white beard. He is usually shown wearing a white robe and wearing a golden crown on his head.

Jehovah is a Latinization of the Hebrew יְהֹוָה‎, one vocalization of the Tetragrammaton יהוה‎ (YHWH), the proper name of the God of Israel in the Hebrew Bible and one of the seven names of God in Judaism.

"Jehovah" was introduced to the English-speaking world by William Tyndale in his translation of Exodus 6:3, and was taken up in very limited fashion (the King James Version has it only four times as an independent name plus three times in compound terms) in other translations such as the Geneva Bible and the King James Version, which mostly use "Lord". The United States Conference of Catholic Bishops, states that, in order to pronounce the Tetragrammaton, a practice that in liturgical contexts it deprecates, "it is necessary to introduce vowels that alter the written and spoken forms of the name", resulting in "Yahweh" or "Jehovah".

"Jehovah" appears in the still-popular American Standard Version (1901) and Young's Literal Translation (1862, 1899), but it does not appear in current mainstream English translations, some of which use Yahweh but most continue to use "Lord" or "LORD" to represent the Tetragrammaton. The Watchtower Society's New World Translation uses "Jehovah" throughout the Old Testament and even puts it into their version of the New Testament. 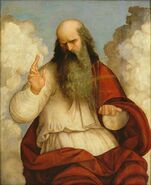 Another Form of Jehovah (Art by Ludovico Mazzolino)

God the Father (Art by JW.org)

Jehovah manifesting on Earth during the Apocalypse (Art by Alex Rommel)

Jesus along with Jehovah (Art by JW.org)