Gods and Demons Wiki
Register
Don't have an account?
Sign In
Advertisement
in: Beings, Human, Saint,
and 3 more

Twenty sons and daughters (in all)

Job is a man known to have had his faith tested by Satan himself, and for his unshakable faith in the God of Abraham.

Job lived in the Land of Uz, in present-day Arabia (or southern Syria), he was a rich and faithful man, known for his great faith and devotion to Yahweh. When his children had feasts at home, when the feast was over, Job would send for them and make them clean. At dawn he offered a holocaust in favor of each one of them, because he thought: "Perhaps my children have, deep down, sinned and cursed God."

However, when the sons of God presented themselves before the face of the Lord, darkness also presented itself, it was Satan, the Adversary and Accuser. The Devil made a bet with the Almighty, saying that Job didn't love him and that if Job lost everything, including his children and his health, he would curse God. To the Accuser's surprise and to the pride of the angels, Job resisted the temptation and, after talking to the Daughter of God, Job was blessed again and received back everything he had lost.

Job is described by Yahweh to Satan as "There is none like him on earth, blameless, righteous, a man who fears God and shuns evil." Showing that Job was a very kind person, fair and of great faith, being considered by Yahweh himself as unique, there being no man on planet of such faith as he. This is later confirmed when even after Job lost all his material possessions, all friends, and even his sons and daughters, he remained intact and did not curse Yahweh. Even when his wife asked him to do this, Job scolded her, calling her crazy, saying: "What? shall we receive good at the hand of God, and shall we not receive evil?".

Job was a righteous man of great faith and very rich, married, he lived in the land of Uz, had seven sons and three daughters. He had seven thousand sheep, three thousand camels, five hundred yoke of oxen and five hundred donkeys. He also had many servants at his service. He was the richest man among all the inhabitants of the Orient of his time.

God and the Devil make a bet

When the angels presented themselves before the face of the Lord, the Accuser, Satan also presented himself. Proud Yahweh showed Satan his servant Job, and spoke of how righteous and noble he was. Satan responded by saying, "Does Job fear God with no other intentions? Have you not erected a protective fence around him, his family, and all that he possesses? You, personally, have blessed all the works of that man's hands, so that his flocks are scattered throughout the land." The Devil, cunning as ever, still said: "However, stretch out your hand and hurt all that he has, and surely he will curse you and blaspheme before your face!". Yahweh, since he already knew that Job would resist temptation, allowed Satan to do this. That was the day that Yahweh and the Devil made a bet.

Satanas then, just as Yahweh had permitted, took everything from Job: the Sabeans came and killed and took all of Job's flocks and even killed his servants. Those who were not taken or killed were burned alive by the Devil's flames. Later, a strong wind came and hit the house where his sons and daughters were, killing them all. Job then tore off his clothes and said, "Naked came I out of my mother's womb, and naked shall I return thither: the LORD gave, and the LORD hath taken away; blessed be the name of the LORD." Yahweh proudly told Satan that Job had resisted, and once again Satan asked Yahweh's permission, but this time to take Job's health away, and so Yahweh allowed it.

But Job once again resisted and did not curse Yahweh or God. However, after many days and nothing changed, the dismay inevitably came and Job cursed the day he was born, wishing his mother had aborted him. Job tried to find answers to why Yahweh was doing this, even complaining to Yahweh considering himself innocent and Yahweh guilty.

Shekhinah and responded to Job from a whirlwind, showing man all the beauties of creation, and Job saw the limits of the Earth and the gates of Heaven, the myriad of beasts from Leviathan to the smallest microbe, the glory of lightning and the darkness of the deepest caves, the pyramids of Egypt and the pagodas of China. And he knew more than anything before God could finish them all with one word, and he knew that the existence of all of them, every one, depended on the same seed that gave him a case of boils. Job then admitted to Shekhinah that he had no knowledge of the universe, and understood that despite bad things happening, God always has a plan. The Presence of God then withdrew from the earth, and Yahweh again blessed Job.

After that, Job lived 140 years, received double what he had lost, his wife returned to him, and they both had more children. And Job lived to see his sons and descendants to the fourth generation, until he died and met his sons and servants and friends on the other side.

In the Hebrew Book of Job

The Hebrew Book of Job is part of Ketuvim ("Writings") of the Hebrew Bible. Not much is known about Job based on the Masoretic Text.

The characters in the Book of Job consist of Job, his wife, his three friends (Bildad, Eliphaz, and Zophar), a man named Elihu, God, and angels (one of whom is named Satan).

It begins with an introduction to Job's character—he is described as a blessed man who lives righteously in the Land of Uz. The Lord's praise of Job prompts an angel with the title of "satan" ("accuser") to suggest that Job served God simply because God protected him. God removes Job's protection and gives permission to the angel to take his wealth, his children, and his physical health (but not his life). Despite his difficult circumstances, he does not curse God, but rather curses the day of his birth. And although he anguishes over his plight, he stops short of accusing God of injustice. Job's miserable earthly condition is simply God's will.

In the following, Job debates with three friends concerning his condition. They argue whether it was justified, and they debate solutions to his problems. Job ultimately condemns all their counsel, beliefs, and critiques of him as false. God then appears to Job and his friends out of a whirlwind, not answering Job's central questions. Job, by staying silent before God, stresses the point that he understands that his affliction is God's will even though he despairs at not knowing why. Job appears faithful without direct knowledge of God and without demands for special attention from God, even for a cause that all others would declare to be just. And the text gives an allusion to Job 28:28: "And unto man he said, Behold, the fear of the Lord, that is wisdom; and to depart from evil is understanding".

God rebukes the three friends and gives them instruction for the remission of sin, followed by Job being restored to an even better condition than his former wealthy state (Job 42:10–17). Job is blessed to have seven sons, and three daughters named Jemimah (which means "dove"), Keziah ("cinnamon"), and Keren-happuch ("horn of eye-makeup"). His daughters were said to be the most beautiful women in the land.

In the Greek Old Testament Book of Job

The Septuagint, an ancient Greek translation of the Hebrew Old Testament, has a revised and updated final verse that claims Job's genealogy, asserting him to be a grandson of Esau and a ruler of Edom.

Job offers sacrifices to the Lord (Art by ???) 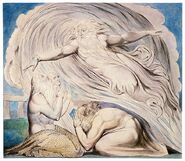