Jophiel is the True Archangel of Love and Beauty and is known as one of the most beautiful beings in all of Creation.

She was the Angel present in the Garden of Eden that helped expel Adam and Eve and later watched over Noah's sons. The Archangel of art and beauty, she is the patron of artists, helping with artistic projects, thinking beautiful thoughts, to see and appreciate beauty around all. Helping to create beauty at home and at work, Jophiel is the Archangel for interior decorators.

She illuminates the humans creative spark by giving them ideas and energy to carry out artistic ventures. She also helps the humans to see the beauty in all things, including other people.

As well as helping their creativity, Jophiel helps them to slow down and smell the roses. She will help if one's soul is sleeping and needs awakening and if they wish to awaken a deeper understanding of who they are and seeking a connection with the higher self, so that they may take their first steps along their spiritual pathway.

Jophiel is basically the angel who attempts to put great joy, appreciation, and happiness in all things. While she can be the archangel of beauty, she is also a formidably powerful angel and warrior. Her artistic design can also lead to numerous designs and functions of the weapons used by angels for offense as well as the armor for defense. Jophiel also has the ability to construct the weapons and armor to suit the needs and abilities that angels possess for their powers to function properly through their arsenal. However, due to Jophiel being the archangel of love and beauty, Jophiel is rarely seen fighting and is more of the non-fighting type similar to Aphrodite and Venus. Jophiel is mainly seen with her partner, the archangel of lightning and thunder, Barachiel.

Jophiel is an extremely beautiful angel with a form described as putting many beauty goddesses to shame, who is considered to be highly attractive by her fellow angels, with back-length strawberry-blonde hair and blue eyes. It is revealed that Jophiel's wings are what truly make her beauty, even more than her appearance and personality. Her wings are said to be a beautiful mixture of pink and red, symbolizing her as the angel of love and beauty.

Jophiel is a pacifist who is against using underhanded means like violence. Jophiel is a kind-hearted and altruistic person, and extends this side of her personality even to those of the lower class angels, unlike many other upper-class angels. She is also revealed to be Auriel's mentor, into spreading love and hope upon humanity, she supervise her studies during Auriel's training as the Archangel of Hope. Jophiel is rather humble and immodest as in spite of her great talents and beauty, she is not at all boastful about them but remains level-headed and speaks modestly to all her peers, even those in the lesser spheres.

Similar to that of Lilith, Aphrodite, Venus and many other entities of love and fertility, Jophiel is more better at seduction and sexuality than fighting to the point that she absolutely hates violence and is more interested in things such as love, beauty, relationships, families and so forth.

According to the pseudepigraphal Revelation of Moses, another name for Jophiel is Dina. Jophiel/Dina is described as an angel of the seventh heaven, a Cabalistic guardian of the Torah (and wisdom itself), who taught 70 languages to souls at the dawn of creation. The Zohar lists her as a Great Angel Chief in charge of 53 legions who superintend Torah-readings on the Sabbath. Jophiel is said to be a companion to the angel Metatron.

In Anglican and Episcopal traditions, Jophiel is recognized as an archangel. She is often depicted in iconography holding a flaming sword, such as the stained glasses at St Michael's Church in Brighton, St Peter and St John's Church in Kirkley, Holy Trinity Church in Coventry and a mural at St. John's Episcopal Church in Memphis, Tennessee.

Jophiel is an Archangel of the Kabbalah (though some systems put Raziel in her place) and in several listings including that of the early medieval theologian Pseudo-Dionysus. The Calendarium Naturale Magicum Perpetuum lists Jophiel as the angel of the Sephira Chokhmah, as do the Key of Solomon variant "The Veritable Clavicles of Solomon," and the Sixth and Seventh Books of Moses, both latter works derived from the Calendarium. Agrippa attributes Jophiel to Saturn, while Paracelsus assigns her to Jupiter. Rudd attributes the Zodiac to Jophiel along with the Sephira Binah instead of Zaphkiel. Athanasius Kircher names Jophiel as Angelus pulchritudinis, "angel of beauty". According to Robert Ambelain, Jophiel is in charge of the Cherubim, particularly the Shemhamphorasch angels Haziel, Aladiah, Lauviah, Hahaiah, Iezalel, Mehahel, Hariel, and Hakamiah. 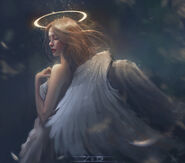