Gods and Demons Wiki
Register
Don't have an account?
Sign In
Advertisement
in: Beings, Human, Saint,
and 6 more

Joseph of Nazareth, also known as Saint Joseph, was a carpenter and is also the husband of Mary of Nazareth and the adoptive father of Jesus Christ.

Saint Joseph was a man chosen by God to serve as the substitute father of His Son Jesus Christ during his time on Earth. Joseph was married to the Savior's mother, Mary of Nazareth. 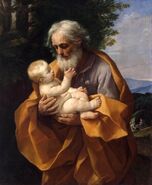 Joseph and his family (Art by Bartolomé Esteban Murillo)