Gods and Demons Wiki
Register
Don't have an account?
Sign In
Advertisement
in: Beings, Kabbalah, God,
and 8 more

Crown, Keṯer, Yahweh, The Father, Kether, "Ehyeh Asher Ehyeh", Emanation of the Crown, The First Emanation, First Sefirot, Ayin Keter, The First Utterance, The Singularity, The Opening, The Crown, the Ancient of Days, The Crown of the Tree of Life

Keter is the first of the emanations of God in creation that form the Sefirot, the Tree of Life. He is guarded and maintained by none other than Archangel Metatron, God's Spokesman in creation and the most powerful Angel.

At top-most, Keter means "Crown", he is the first emanation of God, being the Sefirot that serves as a process for the Light of God to pass through and arrive at creation, existing at the top of Atziluth, beyond the limits of the understandable world, in an "ineffable heaven" where all descriptions and conceptions of anything remotely terrestrial and recognizable cease to exist or apply. He is guarded and maintained by Metatron, the Voice of God, as opposed to Malkuth, the lesser emanation of God who is ruled by Sandalphon.

Since its meaning is "crown", it is interpreted as both the "topmost" of the Sephirot and the "regal crown" of the Sephirot. It is between Chokhmah and Binah (with Chokhmah on the right and Binah in the left) and it sits above Tiferet. It is usually given three paths, to Chokhmah, Tiferet and Binah. Keter is so sublime, it is called in the Zohar "the most hidden of all hidden things", and is completely incomprehensible to man. It is also described as absolute compassion, and Moses ben Jacob Cordovero describes it as the source of the 13 Supernal Attributes of Mercy.

An interesting association would be to compare with Planck's time, from the Big Bang. In Hinduism, it is understood as Brahma, the vital principle of all forms of energy (and consequently life). His virtue is the achievement, the accomplishment of the great work. The spiritual experience attributed to this sephirah is union with God.

According to the book Bahir: "What are the ten utterances? The first is supreme crown, blessed be His name and His people."

The first Sephirah is called the Crown, since a crown is worn above the head. The Crown therefore refers to things that are above the mind's abilities of comprehension. All of the other Sephirot are likened to the body which starts with the head and winds its way down into action. But the crown of a king lies above the head and connects the concept of "monarchy", which is abstract and intangible, with the tangible and concrete head of the king.

This first Sefirah represents the primal stirrings of intent in the Ein Soph (infinity), or the arousal of desire to come forth into the varied life of being. But in this sense, although it contains all the potential for content, it contains no content itself, and is therefore called 'Nothing', 'The Hidden Light', 'The air that cannot be grasped'. Being desire to bring the world into being, Keter is absolute compassion.

The name of God associated with Keter is Ehyeh Asher Ehyeh (Hebrew: אהיה אשר אהיה), the name through which he revealed himself to Moses from the burning bush. "It is from the name Ehyeh that all kinds of sustenance emanate, coming from the source, which is the infinite".

Keter, although being the highest Sephirah of its world, receives from the Sephirah of Malkuth of the domain above it. The uppermost Keter sits below no other Sephirah, although it is below Or Ein Soph which is the source of all Sephirot.

Keter with the Origin of the World (Art by Eli Minaya) 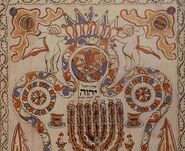 Keter depicted in a Mizrach printing (Art by Samuel Habib)