Granfaloon, Fused Ghost, Grotesque Mass of Demons, The One Who Is Many

Legion are a group of demons that combined into one which was referred in the Christian Bible.

Rather atypically, it is made of countless evil spirits able to incarnate into a physical body or separate into their respective ethereal forms at will. While the types of demons that make up Legion is unknown, they are purportedly said to be the same kind of demon that would inhabit a host and would have a single hive mind. Speaking of which, the demons of Legion do act like a hive-mind, always speaking in unison, and thus always knowing what the other demon is thinking and preparing to do.

A seething lump of flesh made from innumerable sacrifices. Crushes foes with its massive weight. The general form is a floating sphere composed of numerous featureless humanoid bodies that acts as a shell concealing a center core of varying identity. Generally speaking, the shell has to be broken apart by repeated strikes before the core is exposed, and only by damaging the core can it be defeated.

In almost all of its appearances in Castlevania, Legion appears as a floating sphere that is protected by an outer shell composed of a massive gathering of innumerable humanoid bodies. This enormous lump of flesh conceals an inner core whose identity can vary. In most cases, the shell must be broken apart piece by piece by striking it repeatedly before parts of the core can be exposed, and only by damaging it can be defeated. In most portrayals of this entity, when the shell is hit, pieces of it will crumble to the floor, these usually being either the bodies that conform its structure and which sometimes will aimlessly shamble across the floor in a zombie-like manner, or small and infectious maggots, or even harmless spurts of bodily fluids.

In most incarnations, this entity will move from side to side in an almost imperceptible motion, although never getting too far from its initial place at the center of the room. Its movements are so deceptive that they may take its enemy by surprise while they're focused in only inflicting damage, potentially resulting in them getting bumped with the massive weight of the demon and receiving a considerable amount of damage.

Legion's true form is a grotesque floating sphere composed of numerous featureless humanoid bodies that acts as a shell concealing a center core of varying identity. Legion can take several shapes and forms that it is limited only to itself and to what it can reach. It can even take the form of an earthly animal, although the animal itself becomes severely grotesque having numerous hands, eyes, mouths, and arms sprouting across its body. While difficult, Legion is able to a humanoid demon form though it takes time to build.

Legion has turned out to be a terrifyingly frightening and evil demon, being a demon that many supernatural hunters fear encountering and having to trying exorcise. Legion by possessing the Gadarene man, he made the man try to cut himself with sharp stones to try to make him kill himself, a fact that was proved when he entered the pigs and immediately made them commit suicide. Legion, when possessing a human body, begins to torture the psychological person, making him have depressive and negative thoughts to erase any desire of live from its host. Their attitude of possessing human bodies is seen as an abhorrent act to most angels, as it deprives humans of their only weapon - free will.

Despite being a truly satanic entity, he seems more like an animal driven by pure instinct, although he admits that he does it of his own free will. Raphael mentions that Legion is "evil for fun" and his sport is torturing the children of God. Despite this, he showed himself to be a coward and with a great fear of supernatural beings above him, as when he saw Jesus Christ with his disciples and his immediate reaction was to bow to the Messiah for fear of being sent back to Hell. He also does not risk entering people who are protected by the Holy Spirit.

When gathered together, Legion can also expand its power far beyond the norm of the demons that make it up as a single unit. Legion can even take several shapes and forms that it is limited only to itself and to what it can reach. To the point where it can even take the form of an earthly animal, although the animal itself becomes severely grotesque having numerous hands, eyes, mouths, and arms sprouting across its body.

Little is known about its background, although rumor has it that it was formerly a mere Angel from the lowest choir, a Malakh, who followed the charismatic Helel during his rebellious crusade and, upon seeing that the War in Heaven was going to lose in their favor, begun devouring other lesser angels’ spirits in order to gain more power in a desperate attempt to turn the battle’s tide. However, even with it absorbing loads of angelic spirits, it was easily killed by the True Archangel Uriel with a single fire attack and had its corpse thrown out of Heaven along with the rest of the rebel angels after the failed rebellion.

These angels were said to behave like a "hive-mind" of sorts and according to Raziel they were bound by an oath that whatever action that one of their group performs they all must follow suite similar to the Watchers. He further goes on to say that he witnessed these rebel angels attacking the opposing angels by converging upon them and then devouring their wings and essence in order to strengthen their numbers. They attempted to reach the Crystal Spire like a swarm of starving locusts only to be destroyed by the True Archangel Uriel with a single attack and had their corpses thrown out of Heaven alongside the rest of the rebel angels.

Afterwards, it fell into the Corrupted Inferno and stayed there with the rest of the deceased angels However, Legion's soul still kept beating and in a desperate attempt to save itself, it started to absorb the deceased fallen angels nearby along with the many evil spirits that was around it. After absorbing at least one thousand souls and bodies, Legion reawaken and had all forms around to unite as one. Despite suffering a devastating blow from Uriel coupled with their fall from Heaven these fallen angels were not completely destroyed as several of them managed to survive the attack and the impact as well. However, their forms became mangled and twisted beyond recognition to the point where they had the appearance of a black, viscous, serpentine liquid with portions of brimstone emanating around their newly manifesting form.

After its revival, he kept absorbing other lesser demonic spirits to become strong enough to gain revenge over Heaven, until eventually its own soul got lost in the process and all that remained of the original angel was the beautiful-looking body, which its (or their) physical humanoid incarnation. It is said that Legion was able to reform itself by absorbing the dormant power of Necroplasm that laid within the foundations of Hell.

The New Testament outlines an encounter where Jesus healed a man possessed by Legion known as "the exorcism of the Gerasene demoniac". This when Legion (who was known as a demonic spirit) said "For we are many," in ancient scriptures. The earliest version of this story exists in the Gospel of Mark, described as taking place in "the country of the Gerasenes".

In the account, Jesus encounters and healed a possessed man from a region in Caesaria Maritima in the Near East and calls on the demon to emerge, demanding to know its name – an important element of traditional exorcism practice. He finds the man is possessed by a multitude of demons who give the collective name of "Legion". Fearing that Jesus will drive them out of the world and into the abyss, they plead him to instead send them into a herd of pigs, which he does. Jesus then casts Legion out of the man, granting their request by allowing them to dwell in a herd of pigs. The pigs then drowned themselves in the Sea of Galilee.

The Greek word chora is used in the original Greek, translated "country" in the King James Version, but it can also be defined as meaning "the space lying between two places or limits" or "an empty expanse". In Luke 8:31, the word abyssos is used, meaning "bottomless pit". Although none of the words translated "Hell" in the Bible, those being Sheol, Gehenna, Haides, Tartaros, were used in the passage it can be interpreted that they begged to be spared from being sent back to Hell.

Legion's core somewhat resembles depictions of the ophanim, a type of angel that is said to hold up God's throne, and among the highest ranked in the angelic hierarchy. They are described as several wheels spinning and rotating within each other, similarly to a gyroscope with rims covered in eyes.

Granfaloon is named after a concept found in Kurt Vonnegut's 1963 science fiction novel Cat's Cradle. In the novel, a "Granfalloon" is defined as a "false karass"; that is, it is a group of people who affect a shared identity or purpose, but whose mutual association is meaningless. It is a satirical reference to a group of high-minded people who share a similar belief. The group is described by Vonnegut as "a proud and meaningless association of human beings".

In classical Latin, Legion's name was "Legio," the term for a Roman military unit of 5,000 soldiers. From this, the name "Legion" came to mean "army

Legion appears in Chapter 5, the Gospel of St. Mark, possessing a human body and uttering the line: "My name am Legion, for we are many." As its name signifies, it is not a single entity, but a vast amalgamation of souls. These souls, driven by hatred and jealousy, have lost all sense of individuality. A conglomerate of evil spirits that experienced similar pains. The evil spirit sees other spirits suffering as their own, melding themselves together to truly become one.

The story of Jesus and Legion is also in the other two Synoptic Gospels. The Gospel of Luke shortens the story but retains most of the details including the name. The Gospel of Matthew shortens it more dramatically, changes the possessed man to two men (a particular stylistic device of this writer) and changes the location to "the country of the Gadarenes". This is probably because the author was aware that Gerasa is actually around 50 km away from the Sea of Galilee (although Gadara is still 10 km distant). In this version, the demons are unnamed.

According to Michael Willett Newheart, professor of New Testament Language and Literature at the Howard University School of Divinity, the author of the Gospel of Mark could well have expected readers to associate the name "Legion" with the Roman military formation, active in the area at the time instead of the demon. The intention may be to show that Jesus is stronger than the occupying force of the Romans. Seyoon Kim, however, points out that the Latin legio was commonly used as a loan word in Hebrew and Aramaic to indicate a large number.

The miracle of the Gadarene swine is found in many artworks, such as church wall friezes, and iconography, along with other exorcisms and miracles of Jesus up to the modern era.

Legion possessing a human (Art by ???)

Legion's true form (Art from Castlevania: Symphony of the Night) 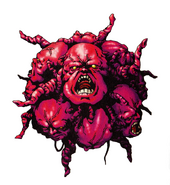