Gods and Demons Wiki
Register
Don't have an account?
Sign In
Advertisement
in: Beings, Monster, Greek,
and 3 more

The Lernaean Hydra, or simply the Hydra for short, is a gigantic dragon monster with numerous heads, with the center one being immortal. It is one of the offspring of Typhon and Echidna.

The Lernaean Hydra is a gigantic, ancient nameless serpent-like chthonic nine-headed water dragon. The monster's haunt was the marshes of Lerna near Argos which was the site of the Danaids. Lerna was reputed to be an entrance to the Underworld, and archaeology has established it as a sacred site older than Mycenaean Argos.

The destruction of the Lernaean Hydra was one of the 12 Labors of Heracles (or Hercules), which he accomplished with the assistance of Iolaus. It had many heads and every time someone would cut off one of them, two more heads would grow out of the stump.

There were also another Hydra, called Hydrae, that had many differences from the Lernaean Hydra.

The Lernaean Hydra possessed many heads, the exact number of which varies according to the source. It is usually depicted as being from anywhere between 7 and 25 meters long and being around 6 to 13 meters tall. This is not correct or incorrect as the hydra is usually fought at different stages of its life depending on the version of the legend.

Common depictions of the hydra give the creature a thick, strong body, a serpentine tail and webbed feet. The Lernaean Hydra is usually depicted as having either two arms and no legs, two arms and two legs or no arms or legs at all when the hydra actually starts off with having no legs then it develops two arms then two legs. So all of these depictions are partially correct.

Similar to the Beast, she does not have a "human" personality, instead having a more animalistic personality, driven by instinct. This can be reinforced by the fact that she is a child of Typhon, the personification of natural disasters, literally a force of nature driven by a desire for destruction. However, like her father, it is likely that she still has some rationality, probably being much more intelligent than other land creatures.

It had poisonous breath and blood so virulent that even its scent was deadly. There is also a regeneration feature to the monster: for every head chopped off, the Lernaean Hydra would regrow two heads.

The middle and dominant hydra head (the front and biggest) was immortal and breathed fire. This giant serpent’s other heads possessed poisonous breath in addition to poisonous and acidic blood.

The Lernaean Hydra was one of the monster born from the unity of Typhon and Echidna before the former went out to defeat and usurp Zeus. It, along with the rest of its siblings, were allowed to leave their nest by Echidna.

While a young Lernaean Hydra wandered around, it was found by the goddess Hera who decided to raise it herself for unknown reasons.

The Lernaean Hydra guarded an entrance to the Greco-Roman Underworld at a swamp near Lake Lerna. Most of the time, it stayed in the spring of Amymone, a deep cave, only coming out to terrorize neighboring villages.

Eurystheus, king of Tiryns, sent the demigod Heracles to slay the Lernaean Hydra as the second of the set of labors that the hero had to complete, in order to redeem himself for killing his wife Megara and his children in a fit of madness. When Heracles reached the lake Lerna, he had to cover his nose and mouth with a cloth, in order to protect himself from poisonous gases that were emitted.

After he managed to lure the monster out of its lair, Heracles quickly cut one of its heads off, only to realize in despair that two new heads had grown. As one head was cut off, two grew in its place.

So, he decided to ask for the help of his nephew Iolaus, who thought of using fire to cauterize the stump as soon as the head is cut off. So, they made a plan; Heracles would cut off the heads and Iolaus would burn the wound with a firebrand. Therefore, Iolaus finally burned out the roots with firebrands as soon as Heracles cut off each head.

As a result, they both quickly started winning the battle. Hera, who had raised the monster specifically to kill Heracles, sent a giant crab in aid of the hydra. The hero, though, crushed it under his giant foot. The final head of the Lernaean Hydra was immortal, and Heracles managed to destroy it by using a golden sword that the goddess Athena had offered him. At last Heracles severed the one immortal head from the body and buried it under a heavy rock.

Thus his second task was complete. However, as Heracles' nephew Iolaus assisted in this trial, Hera also decided that the trial didn't count as one of the 10 trials required.

Then, he dipped all of his arrows into the venomous blood or gall of the hydra which could inflicted fatal wounds. This would later be the hero's demise, as the Shirt of Nessus which Heracles unknowingly wore was covered in the tainted blood, causing him unbearable pain.

A couple of years after its death, the Lernaean Hydra was revived by Hera to be used as her personal monster and "pet".

There are often 2 kinds of hydras in Greek Mythology. The serpentine, aquatic hydra with fins on its head and usually no legs was the Lernaean Hydra which Heracles fought. The other is the terrestrial hydra which is the one with 4 legs and horns and spikes which is usually in other tales. Both of these hydra's could have any number of heads and does not have a set amount.

When the sun is in the sign of Cancer (Latin for "The Crab"), the constellation Hydra has its head nearby. In fact, both constellations derived from the earlier Babylonian signs: Bashmu ("The Venomous Snake") and Alluttu ("The Crayfish").

Development of the Myth

The oldest extant Hydra narrative appears in Hesiod's "Theogony", while the oldest images of the monster are found on a pair of bronze fibulae dating to c. 700 BC. In both these sources, the main motifs of the Hydra myth are already present: a multi-headed serpent that is slain by Heracles and Iolaus. While these fibulae portray a six-headed Hydra, its number of heads was first fixed in writing by Alcaeus (c. 600 BC), who gave it nine heads. Simonides, writing a century later, increased the number to fifty, while Euripides, Virgil, and others did not give an exact figure. Heraclitus the paradoxographer rationalized the myth by suggesting that the Hydra would have been a single-headed snake accompanied by its offspring.

Like the initial number of heads, the monster's capacity to regenerate lost heads varies with time and author. The first mention of this ability of the Hydra occurs with Euripides, where the monster grew back a pair of heads for each one severed by Heracles. In the Euthydemus of Plato, Socrates likens Euthydemus and his brother Dionysidorus to a Hydra of a sophistical nature who grows two arguments for every one refuted. Palaephatus, Ovid, and Diodorus Siculus concur with Euripides, while Servius has the Hydra grow back three heads each time; the Suda does not give a number. Depictions of the monster dating to c. 500 BC show it with a double tail as well as multiple heads, suggesting the same regenerative ability at work, but no literary accounts have this feature.

The Hydra had many parallels in ancient Near Eastern religions. In particular, Sumerian, Babylonian, and Assyrian mythology celebrated the deeds of the war and hunting god Ninurta, whom the Angim credited with slaying 11 monsters on an expedition to the mountains, including a seven-headed serpent (possibly identical with the Mushmahhu) and Bashmu, whose constellation (despite having a single Head) was later associated by the Greeks with the Hydra. The constellation is also sometimes associated in Babylonian contexts with Marduk's dragon, the Mushhushshu.

The Lernaean Hydra rising from the sea (Art by ???) 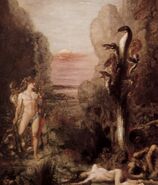 Gustave Moreau's 19th-century depiction of the Hydra, influenced by the Beast from the Book of Revelation

Portrait of Henri IV as Hercules pinning the Hydra of Lerna, an allegory of the Navarrese king's defeat of the Catholic League during the French Wars of Religion. Workshop of Toussaint Dubreuil, c. 1600

A medieval artwork of the Lernaean Hydra (Art from ???) 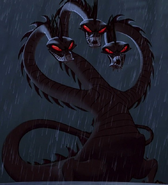