Gods and Demons Wiki
Register
Don't have an account?
Sign In
Advertisement
in: Beings, Deity, Mythology,
and 6 more

Λητώ, Latona, Lover of Zeus, Mother of the Twins, Protector of the Youth

Leto is the Greco-Roman Titaness of Motherhood and Demurity, who was a lover of Zeus and mother of Apollo and Artemis.

Leto was most commonly seen as a titaness of motherhood. After she gave birth to Apollo and Artemis, she also became a protector of the young like they both were. She is also a goddess of modesty. Her sister was Asteria, goddess of the night and darkness, so Leto is assumed to either be a goddess of night like her sister, or a goddess of day and light, the opposite of her sister. The only thing that Leto was usually depicted doing was lifting her veil, which was a sign of woman modesty.

Leto was described as the lawful wife of Zeus, but was merely a concubine.

Leto was described to have bronze arms and long golden hair that zigzagged down her back in an elaborate ladder weave. Her skin glowed against her white sundress.

Leto presumably possesses the standard powers of a Titaness.

Leto was born from Coeus and Phoebe, the First Oracle of Delphi. As the Titan Protector of the Young, Leto became the "world's first babysitter". She was very popular with all the Titans since she would help them babysit their children.

Like most gods, Leto didn't want to marry her cousin Zeus since he swallowed her previous wife, her cousin Metis. However Zeus came to fall in love with Leto, who was charmed her into having an affair with him, which concluded with her becoming pregnant with twins. Zeus married Hera while Leto was pregnant. While the pregnancy began before the marriage, Hera was still jealous of Leto.

For the duration of Leto's pregnancy Hera created problems with a curse. First Leto was pushed out of Olympus and all the world being afraid of receiving her on account of Hera. While trying to consult the Oracle of Delphi for advice, she caught the attention of the dragon Python who was sent by Hera to chase Leto and barely escaped.

When Leto was going into labor, Hera made all land shun Leto from giving birth on the mainland, any island at sea, or any place under the sun so she could find no place to give birth. Leto wandered about till she came to the new floating island of Delos which Poseidon, god of the seas, recently created and so was not yet attached to the earth, thus, not yet land. But when Leto touched it, it suddenly stood still upon four pillars, which was neither mainland nor a real island.

Birth of Apollo and Artemis

Leto went here and laid under a palm tree to give birth. Yet she couldn't give birth because Hera had forbid Eilithyia goddess of childbirth to go to her. Eventually, the other goddesses felt bad for Leto and offered Hera a beautiful necklace to allow Leto to give birth. Hera accepted and Iris took Eilithyia straight to Leto.

Leto, with the aid of a rooster and Eilithyia, with the deathless goddesses Dione, Rhea, Ichnaea, Themis and Amphitrite along with all other goddesses except Hera herself, gave birth to her twins. Leto first gave birth to Artemis and then after another nine days of labor to Apollo with the former's assistant.

Leto's problems continued. But, now she had her two fast developing children, both of whom became powerful archers, to protect her, four days old Apollo was able to kill Python. Some time after Apollo killed the Python, she was then attacked by a cyclops who was sent by Hera to rape her. However, before she was molested and forced into sexual activities, her children came in time to kill the cyclops and rescue her from him.

Leto’s introduction into Lycia was met with resistance. When Leto was wandering the earth after giving birth to Apollo and Artemis, she attempted to drink water from a pond in Lycia. The peasants there refused to allow her to do so by stirring the mud at the bottom of the pond. Leto turned them into frogs for their inhospitality, forever doomed to swim in the murky water of ponds and rivers.

When she was traveling to Delphi to visit her son, the Giant Tityos attempted to abduct her, but Apollo intervened and slew him with arrows and even ensured that Tityos' soul was tormented for all eternity as punishment.

When Queen Niobe of Thebes slightly slandered Leto by claiming that she was better than the Titaness for she had fourteen children (seven sons and seven daughters) while Leto only had two, the indignant Apollo and Artemis slew all of Niobe's children, with the exception of the youngest daughter.

Leto came to establish a reputation that she was a personage to be treated with all reverence, for no one could behave inappropriately towards her without incurring the wrath of her powerful children.

Leto's counterparts are the Roman Latona, Palestinian Lat and the Celtic Sirona

Rooster: A rooster was next to Leto all through her birth so she decided that she would take it as her symbol. The rooster was also a symbol of the childbirth goddess, Eilithyia. 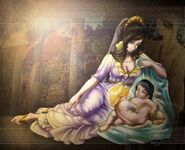 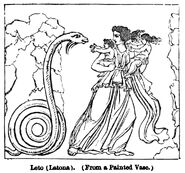 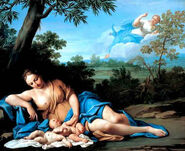 Leto with her children (Art by Marcantonio Franceschini) 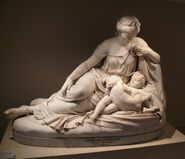