Gods and Demons Wiki
Register
Don't have an account?
Sign In
Advertisement
in: Articles that need art credits, Races, Levian,
and 2 more

Levians, also known as Leviathans, are powerful and monstrous primordial-like entities that were created by Ouroboros and later sealed in the depths of Sheol by God.

The Levians were created by the primordial of Infinity and nothingness, Ouroboros. The Levians are very powerful entities, being more powerful than the Archangels of God, being comparable to the Protogenoi of Khaos, the Arcuthas of God and the Outer Gods of Azathoth, since Ouroboros when she created them, she wanted really powerful entities, and she got it, but in return, the entities were ravening monsters motivated by an almost unrelenting hunger.

Due to their extraordinary powers and their chaotic and evil forms, some would dare to say that they look like strange mixtures of the Old Ones and Primordials, although that is not the case.

Similar to their companions the Old Ones, the Levians are entities that embody primordial chaos and, beyond that, they embody concepts such as nullity, infiniteness and destruction, being extraordinarily powerful and frightening creatures even by the standards of the supernatural world. Because of this, it is difficult to have an accurate description of their true forms, although they often manifest as huge chaotic snakes with long, pointed teeth that devour everything in front of them.

Although Levians are seen as irrational and animalistic entities, second- and third-generation Levians are more "human", with some even preferring to live among them, though they need to curb their devouring instincts.

Their appearances often vary, as being entities that predate time and space, they are extraordinarily different from anything else in the entire universe. When they take physical form, they can appear as bizarre creatures like the Great Old Ones or the Outer Gods, to the point that they even think they are the same thing. Or they may appear as sea serpents or humanoid entities. They apparently have difficulty manifesting in human form due to their chaotic nature, often appearing as humanoid beings with disfigured limbs or rotting flesh. Because of this, most prefer to use a human vessel, as it was with Seraphim Castiel.

Second-generation Levians don't seem to have as much difficulty taking physical forms, and can assume human forms at ease, in both the appearance of a handsome man and a beautiful woman. Which is good for the Levians who still can't control their relentless hunger for meat, thus being able to channel humans to devour them and, in order not to be discovered, change their appearance.

The Levians are extraordinarily powerful entities, being almost as powerful as the Arcuthas or the Outer Gods of Azathoth, possessing such tremendous powers that the God himself saw no option but to imprison these creatures in the deep abyss known as Sheol. Their powers are so great that when they merged with Castiel, the Seraphim managed with just a snap of his fingers to destroy Arcutha Barak on an existential level, causing him to be sent to The Empty.

Despite this, Levians are beings who can only live in groups with a leader to tell them what to do (like Enuma), otherwise they get confused and just start wandering aimlessly or looking for food, or simply enter a state from hibernation. 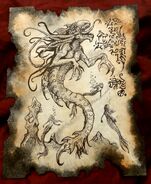 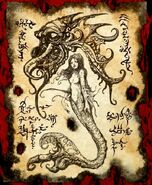 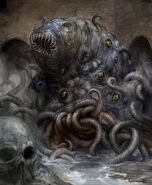 Legions of Levians within Castiel (Art by ???)