Gods and Demons Wiki
Register
Don't have an account?
Sign In
Advertisement
in: Beings, Demon, Hell,
and 10 more

Leviathan is the Demon Lord that presides over the sin of Envy and one of the Seven Princes of Hell that rules Hell and is also its gatekeeper.

Leviathan is a demon of darkness and chaos and a leader of Hell referred in the Bible. Leviathan as the gatekeeper is known as the Hellmouth where the mighty demon's mouth is said to represent the gates of Hell itself. He is also the representation of the sin, Envy.

The entrance of Hell is envisioned as Leviathan's mouth is due to the fact that when a whale is hungry, he opens his mouth and a sweet smell comes out. The fish are tricked by the smell and they enter into his mouth. Suddenly the whale’s jaws close.

Leviathan and the Gates of Hell are inextricably linked to one another, as such it is said that that the demon's very mouth, famously known as the Hellmouth, can lead to the depths of the Abyss as well (though this may be another entity instead).

Leviathan appears as a huge sea beast, a very powerful species of sea serpent-dragon. This form is so colossal that it is said to be capable of frightening the bravest of men and is capable of swallowing fishing boats and even ships. Its scales are several small "teeth" throughout its body similar to a shark's body, only as tough as graphene.

In his human form, Leviathan appears as a handsome young man in his late teens, with long dark hair with shades of blue-green at the tips, with beautiful purple iris. Although the appearance is similar to a human, it has fish gills on its neck and its ears are pointed. It also has small, shark-like teeth that are hidden under a thin layer of skin in its mouth. He appears in clothes with greenish colors like the sea, usually a kind of long sleeveless dress with an opening on the side exposing the legs a little. He usually wears nothing on his feet, always walking barefoot. Despite the beautiful appearance, he is about 1.63 meters tall.

Leviathan has shown himself to be a rather jaded, yet dutiful person. He obeys the command of his leader without objection. Leviathan has adored Lucifer ever since he was young. Like his name suggests, he is a very jealous person, with Lucifer often being the target; though, it should be noted that Leviathan's jealousy isn't limited only to the fallen angel.

Leviathan possesses a natural curiosity of the world, often studying all he can about the biology of other beings. Lucifer is the only one that Leviathan actually holds loyalty towards.

He also developed an immense bitter hatred for his fellow demon Astaroth, who returned this feeling likewise. It needed both Satan and Lucifer to keep the two from starting a civil war within Hell.

As the Grand Admiral of Hell, Leviathan is a mighty Demon Lord that controls the power of water- and and can command other water-dwelling creatures as familiars, with the most common of such usually being giant flying whales and snails.

Leviathan was once a Chalkydri who personally served in the True Archangel Uriel's garrison who in time would unknowingly take all of his accomplishments as her own which made him jealous and angry towards her. Due to this, Leviathan willingly joined Lucifer's rebellion against God to gain control of Heaven. When they failed, Leviathan fell with the others into Hell and had its form corrupted into a serpent or any type of sea monster.

In a fit of anger for his falling, Leviathan opened his now enormously gaping maw as it shot its body upward, taking in the dark waters into its mouth, breaching the surface all while its mouth remained agape, and upon piercing the Heavens, the fires of Paradise ignited a spark upon contact with the demonic waters that it collected during its fall from grace. Heaven's fire mixed with the chaotic waters created a maw of infernal flames, also creating the dreaded Hellmouth.

Seeing him breaching the walls of Paradise, Jophiel took notice of the demon making its way towards the moon with the intention of devouring it. The true archangel took up her sword and with a swift but mighty swing, managing to cut through Leviathan's demonic hide, deterring him from his course in sheer pain, and forcing it to flee back to Hell.

In December 1903, Belial recruited Leviathan to help him and invade the world of Belial's progeny. Using Jesse Blackthorn's body as a host, Belial murdered five Shadowhunters, with an attempted sixth, in London at specific locations in order to form Leviathan's sigil. This opened a doorway about the size of the London Institute's courtyard for Leviathan slip through; though—since he is so physically massive—only a few of his lesser tendrils were able to enter.

He filled the courtyard with seawater and cast it in darkness with the use of storm clouds, and battled most of the London Enclave. When Belial was mortally wounded by Cordelia Carstairs wielding Cortana, and his attempted sixth kill that had completed the sigil was reanimated and survived, the gates between the worlds closed and Leviathan was forced out.

Leviathan appears briefly in league with the demon Moloch, whose minions kidnap Hellboy from the deck of a freighter in the Atlantic Ocean. Leviathan carries Hellboy across the sea in its belly, before spitting him out onto the coast of the same Scottish isle where he was "born."

Astaroth is also mentioned in the mystical prophecy "Anung Un Rama, Urush Un Rama" though it is still unknown if it the events of the prophecy are true.

The Death of Astaroth

During Hellboy's reunion with his uncle and his two brothers, Gamon and Lusk, Leviathan appeared and consumed both Astaroth and his nephews before any further business could be done, ending the grudge between the two demons.

After the majority of the demonic hierarchy is killed by a titan in the visage of Hellboy, Leviathan emerged from the seas to fight his new adversary but was killed. Its death was soon followed by its 'brother' the demon Behemoth's death. As per the prophecy, Hellboy took the corpse of the Leviathan all the way to the stronghold within the Hollow Earth that was established when the Ogdru Hem devastated the Earth and had its skin flayed to be cooked and cover the walls of the stronghold with said skin as a form of protection.

In legend, it is said that Leviathan's own body serves as its own realm of Hell and preys upon souls that attempt to escape from the Inferno, devouring them and sucking them inside its stomach, where they are forever to be burned in the flames of its body. According to Michaelis' classification of demons, Leviathan was a prince of the Seraphim who tempts people to give into heresy, and is opposed by St. Peter.

Leviathan became associated with, and may originally have been referred to by, the visual motif of the Hellmouth, a monstrous animal into whose mouth the damned disappear at the Last Judgement, found in Anglo-Saxon art from about 800, and later all over Europe. The Book of Abramelin, possibly written in the 14th or 15th century, listed Leviathan as one four princes of the demons along with Lucifer, Satan and Belial.

According to biblical accounts, Leviathan was once described as a primordial beast that resided in the depths of Hell until he was tamed by God after the creation of the Heavens and Earth. This origin was likely taken from the Leviathan due to them having the same names. Nevertheless, it would seem that both his true origin and this origin has been somewhat syncretized to where after his fall, Leviathan became a powerful beast of the chaotic oceans that cannot be tamed by man or beast except for God. Despite its demonic nature, God allowed it to share one of the three realms of the Earth, he having the oceans, alongside his brothers Behemoth and likely a demonic version of Ziz, who share the earth and the air respectively.

Anton LaVey in The Satanic Bible has Leviathan representing the element of Water and the direction of west, listing it as one of the Four Crown Princes of Hell and represents the number three, the color blue, man's carnal side and the human element chaos.

There, Leviathan's element is water, water being that which human forms are primarily created of. This representing the unity of matter and anti-matter, chaos and order, yin with yang, and Leviathan's direction is west, west being used to represent chaos and disorder.

This association was inspired by the demonic hierarchy from The Book of the Sacred Magic of Abra-Melin the Mage. The Church of Satan uses the Hebrew letters at each of the points of the Sigil of Baphomet to represent Leviathan. Starting from the lowest point of the pentagram, and reading counter-clockwise, the word reads "לויתן": (Nun, Tav, Yod, Vav, Lamed) Hebrew for "Leviathan". 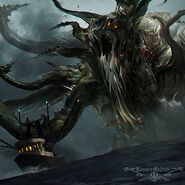 Leviathan in Another Form (Art by Ramsés Meléndez)

Leviathan as a red serpent (Art by Harvibore)

Leviathan as the symbol of envy (Art by Darksilvania) 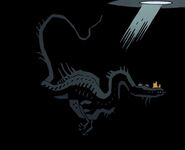 Leviathan under the water (Art from Hellboy)