Gods and Demons Wiki
Register
Don't have an account?
Sign In
Advertisement
in: Articles that need art credits, Beings, Deity,
and 11 more

The Æsir, Ragnarök, Children of Loki

Loki Laufeyson was the trickster son of Fárbauti, a jötunn (giant), and Laufey, a lesser known goddess, while also the blood-brother of Odin.

His mischievous nature was such that he even managed to slither his way into becoming one of the Norse deities, and Loki was known to be a god of mischief, magic and fire as well. His jötunn heritage does aid in explaining the complexity of his character, as the jötunns once went to war against the Aesir and are considered, in many ways, their enemies.

Loki, as the son of a giant as well as a goddess, straddles the two warring factions, a trait which plagues his character throughout his mythology. He marries the minor goddess Sigyn, but has many affairs, his most notable with the giantess Angrboða, by whom he gives birth to Hel, the queen of Niflheim; Fenrir, the oversized wolf who is fated to kill Odin at Ragnarök; and Jörmungandr, the World Serpent banished to the seas.

The trickster god also, interestingly enough, is the mother of Odin's great eight-legged steed Sleipnir, as Loki mated with a powerful male stallion while disguised as a mare. As his parentage and his progeny are all outside the normal state of affairs even in the godly world, scholars believe that there must have been pertinence to his connection to so many dark and powerful figures in the Norse pantheon.

After thousands of years bound beneath a venom-dripping snake, Loki's appearance has become greatly grotesque. His hair is bleached white from centuries of toxins, his face is no more than a melted mask of scar tissue, and he is sickly-thin.

When projecting himself out of his prison, he appears as a shockingly handsome man, with dirty-blonde hair (with red, blonde, and yellow tints), tousled in a fashionable sort of way. His appearance, however, is somewhat ruined by his scars. Burn tissue is splashed across the bridge of his nose and cheekbones, his lips are marred by a row of welts all the way around his mouth, much like many piercing holes that had closed over.

His eyes have an intense glow to them, with his gaze flitting restlessly, like fire in a hearth, pushed by the wind, looking for anything it could set ablaze.

Loki is a sly, manipulative, charming, humorous, mischievous, and cruel god. In the tales, he was clever, funny, capricious, silver-tongued, and quick to anger. He is also extremely persuasive, to the point of often being seen as charismatic.

At times, he almost appears to be a textbook example of a psychopath with a lack of remorse and/or any form of empathy. Even his wife, Sigyn, who has been loyally by his side for centuries is often at the mercy of his temper, as he wasted no time berating her whenever she slipped and dropped poison on him. He takes great pleasure in seeing others' pain and misery, even going so far as to make jokes at their expense.

According to Odin, he is nothing more than a scheming coward who cares only for shallow pleasures and self-preservation, who, despite his helpfulness, is always irreverent and nihilistic in the end. However, it is unknown how much of this is true and how much of it is affected by his own hatred toward the god because of his son Baldr's death under Loki's hand.

In spite of such terrible traits, he has shown to be quite helpful and is often appointed or sought out as aid when it comes to matters that even the gods cannot handle. However, while he did help them with his clever plans, he usually caused embarrassment and difficulty for them and himself. Loki has even managed to form a close companionship with Thor, which is evident in where he accompanied the thunder god on his adventurers, as although they constantly frustrate one another, they still enjoy other's company.

He harbors affection for children, most notably his daughter Hel. Whenever talking about them, he becomes visibly upset and grieves about the terrible fates they have to suffer from for no particular reasons: Sleipnir was forced to be Odin's personal mount; Hel was permanently banished into Helheim; Jörmungandr was thrown into the Earth's ocean as a mere hatching ling; Fenrir was bound like a mere beast because of Odin's paranoia; and Narfi and Váli were slain and had their entrails used to bind him to a slab of rock under a serpent. He has also shown violent anger if they are harmed or mocked in any way though he usually only takes action if he believes he could win.

However, his affection for his kids may be an act. He doesn't think twice about attempting to murder his demigod kids for opposing him, nor does he thinks twice about using force to manipulate them against their free will, going as far as to tease and jeer at them, as well as even willing them to die. He was also plenty willing to treat his children as tools in his schemes.

On the other hand, this hostile behavior toward his children may actually be an act as well, as he could be purposefully making his own children hate him and keeping up the image that he views them as nothing, so that the Æsir do not go after them like they did with their older siblings, thus sparing them from the same gruesome fate and discrimination. So his actions against them may actually be for their own good.

Loki was born to the jötnar Faurbati and Laufey. At some point in his life, Loki became Odin's blood-brother and was made a nominal member of the Æsir.

During his time in Asgard, Loki was as much an ally as he was a hindrance; although his sly and mischievous personality often got him into trouble with the gods, he just as often helped them out when they were in need.

Together with the jötunn Angrboða, Loki sired three children: Jörmungandr, Fenrir, and Hel. Soon after their birth, when the gods noticed that Asgard had been peaceful without Loki's mischief for too long to be normal, they took the kids from their mother's hall in the woods and were taken before Odin. With his prophetic powers, Odin noticed that the three would one day became the banes of the Norse gods, and thus decided to separate them for the better.

He ordered Thor to throw Jörmungandr into the Earth's ocean and used magic to make sure the jötunn stayed there, forever stuck within the form of a sea serpent, and never return to his parents' side.

The Fenrir Wolf, Odin's fated bane, he was given to Tyr for raising until a proper prison could be crafted, though Odin had secretly wished to find a way to make him loyal to him, similar to his older brother Sleipnir. This wish of him, however, turned out to be fruitless, as outside of Tyr and Baldr and Hodr, he would be violent and vicious to any other god, especially Odin. According to the words of Fenrir himself, it was because outside of these three gods, none of them ever saw him more than a violent beast, so thus he had no intention to be anything else before them. He would later be, too, imprisoned on the island of Lyngvi and bound by the silken fetter Gleipnir.

And finally, with Hel, he ordered Heimdallr to take the young babe to the realm of Helheim where the "unworthy" dead dwells, a realm filled with freezing winds and baneful curses, and used magic to make sure she would never be able to leave her realm without his invite. Unlike her older brothers, she was the only one her parents were able to save, though when they arrived, half of her body had already turned rotten because of the realm's deadly cold.

According to the two stanzas in Völuspá hin skamma, found within the poem Hyndluljóð, one day, Loki found a half-cooked heart of an unknown woman, presumedly a ogress, roasted on a linden-wood fire, and ate it. Afterward, he was impregnated by the woman's wickedness and later on gave birth to the "evils that plague men".

His tricks came to an end after causing the death of Baldr. Loki, his wife Sigyn, and his two sons, Narfi and Váli, were then led to a cavern under a "grove of hot springs", where he would be imprisoned for his crime of killing Baldr.

Odin then used his Runes to turn Váli into a vicious wolf and ordered him to rip his brother, Narfi, apart, all the while forcing Loki and Sigyn to watch one son killed by another. Afterward, Váli Odinson killed the wolf Váli and with his and Narfi's entrails, the gods bound Loki to a smooth slab of stone where Loki couldn't ever use his wits to escape from. Skadi then fastened a venomous serpent over his face, and from it poison dripped, thus fulfilling her threat.

In an act of mercy, perhaps more for Sigyn than it was for Loki, Skadi conjured up a silver basin for her to catch the serpent's poison from Loki's face. Every now and then, when the basin becomes full, she carries the poison away and during this time the poison drips onto Loki, causing him to writhe with such violence that all of the earth shook from the force, resulting in what are now known as earthquakes.

According to the prophesized Ragnarök, Loki is foretold to break free from his prison and would fight against the gods among the forces of the jötnar, the Norse gods' greatest enemies, and of Helheim, the citizens and warriors of Hel - Loki's daughter who was banished into the freezing realm as a babe because of Odin's paranoia.

He is fated to encounter the god Heimdallr and the two will slay each other.

Interestingly, Loki's portrayal as a scapegoat in the Norse tales surprisingly mimic the portrayal of Jesus and the biblical scapegoat. In the Old Testament, two goats are taken, one is sacrificed, and the other is driven to the wilderness. That one is the scapegoat and it carries the sins of the people away with it, leaving them ritually purified of their failings. This lines up with how Loki is called on by the Aesir/Vanir to find a solution to their dilemmas. The Aesir/Vanir are not always depicted as being benevolent as they actually perform many misdeeds only to turn around and blame Loki for it or they make him fix it for them there by absolving themselves of the consequences. 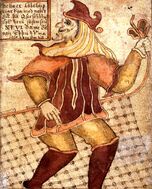 The Punishment of Loki (Art by Louis Huard) 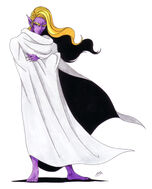 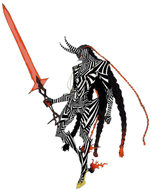