Lucifuge Rofocale, or simply Lucifuge, is the Prime Minister of Hell and one of Lucifer's most faithful supporters.

Lucifuge Rofocale (pronounced with a silent 'e') is the demon in charge of Hell's government by order of Lucifer. According to the Grand Grimoire, Lucifer granting him power over all worldly treasures along with control of the treasury in Hell along with Mammon. He is also a member of the Six Great Officers.

He counts the Goetic nobles Bael, Agares, and Marbas among his direct subordinates.

Lucifuge is utterly devoted to Lucifer, being close to over-zealousness and obsessiveness. He faithfully carries out every one of Lucifer's orders while ensuring his leader is not harmed. Lucifuge is so loyal that he will kill other demons for the sake of his master.

Despite this, he also has an irrational fear of light, which always radiated from Lucifer in powerful waves, much to his dismay and the other demons' delight, as they often used this to tease him.

The Grimoire's initial spells (as in the ones that must be done before the magician can do anything else, or at least any other conjurations) require the magician to first bind Lucifuge to a pact, which involves a fair amount of risk on the magician's part--if he does not give Lucifuge a small portion of every treasure he attains, show charity to the poor, and keep the pact's existence a secret, Lucifuge can take his soul for himself.

When Lucifuge appears, he demands that in exchange for his services, the magician “give thyself over to me in fifty years, to do with thy body and soul as I please.” After more bargaining that involves threats from the magician to send him into eternal fire with the blasting rod, the demon agrees to appear twice a night except on Sundays and makes a written conditional pact with the magician.

In some modern left-hand path belief systems, the demon Lucifuge is said to be the ruler of the qliphoth Satariel. This belief originally comes from a claimed translation of an ancient Hebrew manuscript made by Eliphas Levi and has since then gained acceptance.

Modern-day occult orders such as Dragon Rouge, the Order of Phosphorus and the Temple of the Black Light incorporate the idea of Lucifuge as one of the eleven rulers (there are ten qliphoths, and the last one, Thaumiel, is split in two, thus making eleven).

The name "Lucifugus" comes from two Latin words: lux ("light"; genitive lucis), and fugio ("to flee"), which means "[he who] flees the light". "Rofocal" may be an anagram of "Focalor", the name of another important demon who is possibly in Rofocale's servitude. Another possibility for the origin of "Rofocal" is intimately connected to the very nature of Lucifuge. As Lucifuge is the reverse of Lucifer (Latin for "light bearer"), so is the name "Rofocal" derived from "Lucifer" reversed – that is, "Reficul". 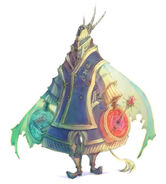