Gods and Demons Wiki
Register
Don't have an account?
Sign In
Advertisement
in: Beings, Demon, Monster,
and 6 more

Vampiric Deity (Classified as a Creature of the Night)

Maacah bat Talmai, also known as Absalom, or the Sacred Ancestor, is an immensely powerful and ancient vampire god.

Maacah is believed to be the first vampire in all of Creation, however, that status is given to Dracula for Maacah is more of a deity. He is the patron deity of vampires and is an important figure in vampire history as he is believed to have lead to the creation of Dracula. Maacah can only be summoned through a special ritual that requires the blood of the "Virgin and the Father". The father being the blood of Dracula himself, the so-called father of all vampires, but it may also apply to one who carries the blood of the vampire king.

The vampire hunter D seems to be in search of him, it's unclear what he will do once they finally meet face to face.

Maacah comes across as close to perfection in all areas for vampires, showing supreme intelligence, courage, knowledge, compassion, ruthlessness, leadership, craftiness, and understanding. Most cannot argue his station as some sort of vampiric deity. He has shown a deep respect for all life and he has shown a deep contempt.

He is constantly philosophizing his actions, the actions of others around him and where those actions will lead to in the end. He is cold, and highly calculating knowing that every action he makes has a huge impact on not just the world but the universe at large.

Not much is known about Maacah's early existence. Rumors among vampire nobility seem to indicate that he was obsessed with a woman named "Mina the Fair" about ten thousand years ago. It was said that he was unable to attain this woman, and this lead to him being reduced to dust. He is believed to be the first vampire in history to reach the status of Godhood.

Supposedly he was an ancient Hungarian war lord and came to power in the early seasons of the fifth century and possessed a lust for war and bloodshed so great he eventually resorted to killing on his own kind. Even thousands of years later, people still whisper the legends of his decadent, savage feasts and his bathing in warm human blood. Some scholars even claim that his ascension heralded the beginning of the ancient Hungary kingdom's descent into decadence. This is in contention as other sources say he was born before Ancient Mesopotamia at the same time as Oberon.

At some point in time, it was revealed that Maacah struck a deal with the Devil himself, demanding great demonic power. Satan agreed, but on one condition: and that should his own blood lust consume him, he will be take his soul. Maacah, knowing how manipulative the Devil can be, scoffed at the deal but agreed nonetheless thinking it to be a farce. When his people caught wind of this Maacah was labeled as a demon by his own people and was thus ordered to be executed. This sparked the Hungary Massacre where Maacah slaughtered the soldiers that dared to apprehend him.

However, Maacah was eventually defeated by a sect of priests by incapacitating him with a holy cross. This gave the opportunity for one of the soldiers to decapitate him and ending his heinous reign once and for all. But the priests knew that Maacah would not be so easily bested and thus ordered his remains to be burned and his items to be buried. Centuries passed, and the items belonging to Maacah were discovered and placed in the British Museum in London. The legends of Maacah were completely erased with many people dismissing him as a myth, but not for the vampires.

It is believed that Maacah was intended to be the dark soldier and original "Son of the Devil" that Satan desired in order to spread destruction and mayhem across the lands. However, he noticed that Maacah was too unstable and thus abandoned him. He later moved his interest towards Vlad III, the man who would later become known as Dracula. According to some demonic scholars, Satan had used the blood of Maacah to create the Vampire King before his execution at the hands of the Ottomans.

Nonetheless, the legend of Maacah was passed around through vampiric society, with some vampires worshipping him as their patron god, however others only look at him in contempt as they believe him to an ancient vampire that only elevated himself to the status of a god and is not actually a deity 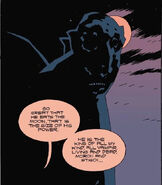 Maacah being alluded to by Carmilla (Art from Hellboy)