Mammon is a powerful fallen angel, now demon, that personifies the sin of Greed and is the demon lord of avarice, richness, abundance, prosperity, wealth and injustice, most often personified as a deity. He is the demon that forged Hellboy's Right Hand of Doom and gave knowledge to mortals on the creation of Homunculi.

Mammon is a high ranking demon in Hell and is also one of the seven princes of hell, each representing the Seven Deadly Sins with him representing the sin of Greed. Later demonological writings such as De Plancy's Dictionnaire Infernal attributes Mammon as hell's ambassador to England. For Thomas Carlyle in Past and Present, the "Gospel of Mammonism" became simply a metaphoric personification for the materialist spirit of the nineteenth century.

Mammon is credited as the creator of alchemy, specifically credited as the one who bestowed knowledge to humans on what the proper alchemical compounds are needed to create gold. Mammon's bestowal of such forbidden information also led to the creation of the homunculi, humanoid entities of great power and strength, which in turn makes him the indirect creator of such creatures.

He first showed the power of alchemy in Egypt in 300 B.C., to a metallurgist 'sorcerer' named Ronny along with his disciples, who were also at the time members of the recently formed Illuminati. With Mammon's guidance, he creates a "complete homunculus," using his and their blood as a medium. This complete, omniscient homunculus (shaped in the likeness of Ronny) observes this Ronny and others out of curiosity and slight envy. It then decides to move about its own accord while being under the discreet guidance of Mammon.

Perhaps Mammon's two greatest achievements are the constructions of the Right Hand of Doom and the Twin Blade, both of which have unspeakably devastating properties hidden within them. The Right Hand of Doom acts as the key that will unlock the gateway where the Old Ones are being kept at bay from God's creation. And the Twin Blade was made to be capable of killing almost anything.

In his appearance, Mammon appears as a wolf-like demon of wealth, especially given that wolves would be associated with greed in the Middle Ages. Mammon's skin appeared to be entirely made of a golden material but with several black scorched marks. He had single curved spikes jutting out of his elbows, two other spikes out of his shoulder blades, and finally his knees. His feet resembled those of some kind of eagle or dragon, and his hands resembled the claws of a dragon, his tail was also that of a dragon's. His head on the other hand resembles that of a wolf with no visible lips thus allowing his fierce dagger sharp teeth to be visible. He had bright golden amber eyes with a black sclera. When unfolding his wings they are also of a gold color though the tips of his secondary feathers are a faded black with the greater secondary coverts being a scorched black.

When appearing on the various fashion magazines, he appeared as "a stereotypical, privileged young lord". His hair is described to be made out of pure color while his eyes shift color constantly between the colors of banknotes, with the most notable one being the "dollar-green". His skin is the same as a priceless ivory statue, so pale that it makes the color white seems darker in comparison. He also leave behind him a trail of black oil, which Wright claims to worth a thousand times more than any oil human could possibly mine on Earth. Mammon is often pictured with many eyes with which he is meant to use to search for gold.

From his manipulation of medicines, it seems he has knowledge in alchemy. Mammon also possesses knowledge on corrosive chemicals, and combined with his knowledge of alchemy, it proves he is intelligent and has a science-centered mind, though still beneath Beelzebub and Belphegor. Many of his attacks involve throwing hidden chemicals.

During his time in Heaven, he was depicted as forever looking downward at Heaven's golden pavement rather than God himself. In fact, some believe that Mammon's obsession with gold was to the point where he did not even care about Lucifer's rebellion but due to the fact that he cared more about material wealth than God he was cast out by the true archangel Gabriel.

After the rebellion in Heaven, Mammon was banished to Hell where he is the one who finds underground precious metal that his demonic companions use to build their capital city, Pandemonium by Lucifer's order. Mammon counsels the devils to be happy with what they have got, and to create a home for themselves in Hell.

He also convinced Lucifer that they should use the wealth of Hell to control the Abrahamic underworld. He is also believed to run Hell's banks and all of its treasury.

At some point during further construction, Mammon and Mulciber discovered the substance known as Necroplasm during their cultivation of the Abyss and transforming it into the kingdom of Hell. Upon this discovery, they would take this substance, cultivate, and later mass produce it for other beneficial means; it is mainly exclusive to the Eighth Circle of Hell within the Malebolge. The production of Necroplasm gave way to the creation of Basileus and the Hellspawn.

Mammon also crafted the enigmatic Right Hand of Doom alongside Belphegor, and both he and Azazel believe that with this object, which is the key to the Outerverse, they can unleash and maybe even control the Outer God known as Yog-Sothoth, using the ancient deity in their war against God and Heaven. The Right Hand of Doom would not be used until thousands of years later where Mammon, alongside Dagon and Astaroth, were to look after Azazel's son, Anung Un Rama. The two demons witnessed the birth of the cambion in Hell, and then cut off his right hand to graft the Right Hand of Doom onto him.

At some point in time, Mammon, with the aid of Mulciber, created the legendary Twin Blade, which was made from the bones of a fallen angel, salt that was crystalized from the tears of Michael, then melted down with the ichor of a god into Damascus Steel. The Twin Blade is capable of killing almost anything. It is unknown why Mammon created such a weapon although it is believed that Mammon was aware of Satan's true intention of destroying creation to start over and feared that he would be among those that would not be spared from his mission. Thus, Mammon would oversee the creation of the Twin Blade in a bid to kill Satan simply for self-preservation.

In 2010, Mammon was summoned by Lilith in an effort to convince all the Princes to work together to accomplish their ultimate goal.

In his appearance, Mammon is somewhat similar to the gods Plutus and Dis Pater; especially when Plutus appears as a wolf-like demon of wealth, wolves being associated with greed in the Middle Ages. Thomas Aquinas metaphorically described the sin of Greed as 'Mammon being carried up from Hell by a wolf, coming to inflame the human heart with Greed'.

In some interpretations, Mammon was not really a demon but another name for dishonest wealth. Later, Mammon become viewed as an actual demon and is also one of the Seven Princes of Hell, each representing the Seven Deadly Sins. Mammon represents Greed and is known as the Treasurer of Hell, and was said to have dealings with the Greek deity Zeus.

Gregory of Nyssa also asserted that Mammon was another name for Beelzebub. In the 4th century Cyprian and Jerome relate Mammon to greed and greed as an evil master that enslaves, and John Chrysostom even personifies Mammon as greed.

In the Middle Ages, it was personified as an evil deity or demon supposedly (but incorrectly) derived from the Egyptian god Amun Ra. Many illustrations portrayed him as a hawk-headed humanoid, similar to the god Ra, and sometimes with two heads, the two-headed eagle being a heraldic symbol of its own, associated with various empires such as the Byzantines and the Romans. He appears in Milton's Paradise Lost as a fallen angel, and in the famous demonology book Dictionnaire Infernal, represented as a small man clutching bags of money, and described as "Hell's ambassador to England".

Albert Barnes in his Notes on the New Testament states that Mammon was a Syriac word for an idol worshipped as the god of riches, similar to Plutus among the Greeks, but he cited no authority for the statement. No trace, however, of any Syriac god of such a name exists, and the common literary identification of the name with a god of covetousness or avarice likely stems from Spenser's The Faerie Queene, where Mammon oversees a cave of worldly wealth. Milton's Paradise Lost describes a fallen angel who values earthly treasure over all other things. Later occultist writings such as Jacques Collin de Plancy's Dictionnaire Infernal describe Mammon as Hell's ambassador to England. For Thomas Carlyle in Past and Present, the "Gospel of Mammonism" became simply a metaphoric personification for the materialist spirit of the 19th century.

Under the influence of the Social Gospel movement American populists, progressives and "muck-rakers" during the generation of 1880-1925 used "Mammon" with specific reference to the consolidated wealth and power of the banking and corporate institutions headquartered on Wall Street and their predatory activities nationwide. 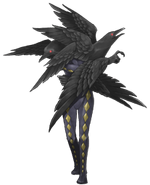 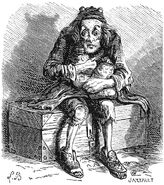 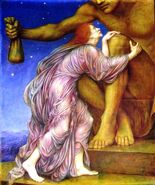 The Worship of Mammon (Art by Evelyn De Morgan)

Mammon in a humanoid demon form (Art by AuroraArchangel369)

Mammon as the symbol of greed (Art by Darksilvania)