The Megaverse, also known as Multiverse Complex, is a set of multiple multiverses, each generally having from two to an infinite number of universes distributed within itself. The Megaverse, like the rest of existence, is part of the set of multidimensional structures created by God that are part of His Creation.

The Megaverse is an infinitely large multidimensional structure that was created by God after the famous "Let There Be Light". A Megaverse usually consists of a set of other multidimensional structures known as a Multiverse, which in turn has several universes distributed within them like a bunch of soap bubbles. Likewise, a megaverse can have from to two to infinite multiverses within itself, such as the Human Realm, Heaven, Hell, among many others, with the exception of realms like Sheol and Outerverse, which are realms beyond the space-time, being practically nonexistent for normal terms.

The Megaverse is an extradimensional realm that exists spanning countless multiverses, each containing countless universes within. There are other Megaverses, the total number of which is unknown, but it is likely that they are an unlimited and borderless number of "bubbles" that are part of God's Creation. 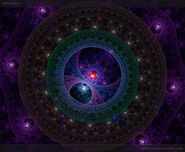 Set of multiverses within a megaverse (Art by Shortgreenpigg)