Gods and Demons Wiki
Register
Don't have an account?
Sign In
Advertisement
in: Beings, Angel, Heaven,
and 12 more

Metatron is the Voice of God and the Chancellor of Heaven, and is even regarded as the King of the Angels. He is Yahweh's personal Vessel in Creation - Metatron creates a physical form for Yahweh to manifest through him - acting as the "Voice of God".

Metatron is the greatest and most powerful of the Archangels of Heaven, being the personal scribe of God. Whenever a human believes God has directly spoken to them, in reality it is Metatron acting as his vessel. One million eyes and mouths cover his body, and every mouth speaks a different language. He is also the patriarch Enoch, who, after death, merged again with Metatron and the Archangel was fused with the Most Holy Name of God, who considered him worthy to act as His direct avatar and spokesperson within the universe. Metatron is said to be the twin brother of the archangel Sandalphon.

He is the being who is the nearest in hierarchy to that of God. He is said to have the largest body among all of the angels, having 36 wings, 3 representing the triumvirate of the Father, the Son, and the Holy Spirit, multiplied by the 12 tribes of Israel, God's chosen people). Metatron even has a throne of his own since being God's representative. It is understood that any angel who wishes to speak to God must go through Metatron first and that every command uttered by Metatron must be fulfilled by all other angels.

Many argue that the level of power and influence which Metatron has is on par or possibly even superior to Lucifer's former position as the anointed prince of the Seraphim. It is also shown that Metatron, alongside Raziel, was privy to God's secrets furthermore showing how much God trusts him and how valued he is as an angel. God even goes so far as to plant a crown upon his head that is so glorious that it makes every angel, including the likes of Gabriel, prostrate before him without hesitation.

However, despite his exalted status in Heaven, Metatron was not above being punished should he step out of line. Metatron being punished by God served as a warning to anyone who would dare irk Him. It is believed, by some of the true archangels no less, that Metatron served as Lucifer's replacement after he fell from grace. After Lucifer was condemned to the pit, God felt lonely even amongst his own his children and especially after Barbelo left Heaven since she could not bear to see how much her family as been destroyed and could no longer tolerate her consort's questionable decisions. God anointed Metatron as the King of the Angels to fill in the void.

Metatron utilizes the Merkabah cube for healing and clearing away lower energies. The cube spins clockwise and uses centrifugal force to push away unwanted energy residue. Thus, various appearances of God to various figures in the Bible (such as Abraham, Jacob, and Moses) were actually Metatron acting in His place, until he withdrew entirely from worldly affairs, remaining eternally quiet and not speaking in his whirlwind, even when The Darkness escaped her prison and Ayin escaped from Hell in the Apocalypse.

Its true form is so powerful that it was able to charred the human form of various archdemons and even gods. Metatron is described as an intensely strong and pure light, with a voice that resembles the destruction of several stars. In his angelic form, Metatron appears as an incredibly gigantic being, surpassing Raphael's size in his angelic form, being the largest of all angels. Metatron has a million eyes and a million mouths spread over his body and has six seraph wings, two to cover his face, two to cover his feet, and two to fly.

A few times that Metatron appeared on Earth, the Scribe appeared as a middle aged man in his thirties, his hair was white and his eyes bluish, giving him an appearance resembling one of God's human forms. Metatron wore only the white robes of the ancient Jew. In another form, he manifests in the of a bearded, pot-bellied, middle-aged man in his 60s with a short height of 1.63 cm.

In his last human form, Metatron appears as a handsome young man with hazel hair, his eyes are greenish and his face is generally serious. The Archangel appears wearing a navy blue T-shirt under a gray jacket under a pair of jeans. Unlike other archangels, Metatron invokes 14 wings on his body, pure white and glowing wings, with his glory being described as the manifestation of God Himself.

As the scribe of God, Metatron, with his sacred geometry, is a teacher of esoteric knowledge. Archangel Metatron teaches esoteric wisdom to children and adults. He seems to take a special interest in highly sensitive young people who are misunderstood or even medicated because their spiritual gifts make them socially awkward. He is portrayed as firm and lawful, if not ruthless and unforgiving, especially when it comes to matters that concern demons, whom most he harbors a deep hatred for.

Metatron is the mightiest of all the archangels of heaven, existing at the top of Atziluth, past the boundaries of the comprehensive world, in an "ineffable heaven" where all descriptions and conceptions of anything remotely earthly and recognizable cease to exist or apply. The Archangel is so powerful that he was handpicked by God Himself to be His scribe and described as being God's direct avatar within creation, with his existence compared to an author manifesting within his work by creating a self-insert character, which made him known as "Measure of the Lord", "Face of God", "The God Least", among several other titles that not even Michael or Lucifer came close to having.

When the Rabbi priest known as Ishmael ascended to Heaven, the archangel Metatron guided him through the celestial spheres. The other angels began to quiz Metatron, asking him what makes Ishmael worthy to stand here amongst them all, but Metatron answers all of their questions with an easy calmness and seems to be able to pacify the other angels. Interestingly, Ishmael picks up from their conversations that the other angels refer to Metatron as "Youth."

When he asks Metatron what his name is, Metatron explains that he goes by seventy names but that indeed God and the other angelic entities refer to him as Youth. But Ishmael perceives Metatron to be the greatest of all angels and he who is higher amongst all others. So he cannot fathom why he would be called something so lowly as "Youth" until Metatron reveals that the reason he is addressed as such is because he is the youngest angel for he is in actuality the man formerly known as Enoch.

Metatron reveals that when the flood occurred he was brought up by God, and saved him suffering from the destruction of the Earth so that none could say that God was not merciful. So, to show how much God appreciated Enoch, the man underwent an apotheosis and was transformed into a being that would govern the other angels. This would make Metatron the first and only archangel who had been born a human.

However, there was resistance towards such an apotheosis. It is said that the angels known as Uza, Azza, and Azzael rebelled against this decision, declaring to God that He was a fool for making a man into an angel and that they would not serve under one who was not born of them. But God reprimands them immediately and stamps out their dissent by going so far as to say that He valued Enoch more than He did all the other angels and that they will serve under him whether they like it or not. Unlike Lucifer, the three angels do not possess the same goals as the Morningstar and submit to Enoch in the end.

He received various titles such as "Face of God", "Angel of Contracts" synonymous with the Iranian God Mithra, "King of Angels" and others of the like. His name literally means "He who sits behind the throne of Heaven".

Metatron also appears in the Pseudepigrapha including Shi'ur Qomah, and most prominently in the Hebrew Merkabah Book of Enoch, also called 3 Enoch or Sefer Hekhalot (Book of [the Heavenly] Palaces). The book describes the link between Enoch, son of Jared (great grandfather of Noah) and his transformation into the angel Metatron. His grand title "the lesser YHVH" resurfaces here. The word Metatron is numerically equivalent to Shaddai (God) in Hebrew gematria; therefore, he is said to have a "Name like his Master".

Metatron says, "He [the Holy One]... called me, 'The lesser YHVH' in the presence of his whole household in the height, as it is written, 'my name is in him.'" (12:5, Alexander's translation.) The narrator of this book, supposedly Rabbi Ishmael, tells how Metatron guided him through Heaven and explained its wonders. 3 Enoch presents Metatron in two ways: as a primordial angel (9:2–13:2) and as the transformation of Enoch after he was assumed into Heaven: "And Enoch walked with God: and he was not; for God took him. [Genesis 5:24 KJV.] This Enoch, whose flesh was turned to flame, his veins to fire, his eye-lashes to flashes of lightning, his eye-balls to flaming torches, and whom God placed on a throne next to the throne of glory, received after this heavenly transformation the name Metatron."

Metatron as a scribe (Art by Wen-M) 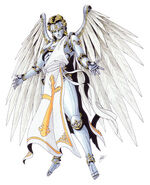 As Marv Corp (Scene from Supernatural) 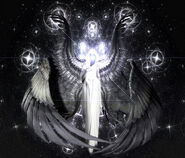 The Lesser God (Art by Dchon) 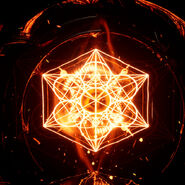