Metis was the Greco-Roman Titan goddess of wisdom and logic, who was the first wife of Zeus and the mother of Athena.

Metis was one of the elder Oceanid nymph, belonging to the second generation of Titans. She is also the mother of Invictus, the son that is said to be destined to overthrow Zeus, his father, in the Second Titan War.

If there is one thing different from her daughter Athena is how they used their intelligence. Athena uses her through raw emotion, ironically making her similar to Ares who she says is inferior to her, while Metis uses her through logic. This logical made her strict, cold, collected and unforgiving, showing not loyalty to anyone but Cronus. It was her logic that made her switch to Zeus' side and betrayed the Titan King even though she was still loyal to the latter.

Her logic is only halted when in the presence of five people, loyalty to Cronus, friendliness to Atlas, bitterness to Zeus, loathing to Gaia and motherly confliction to Athena. Her conflicted nature to her daughter is the main thing as while she is proud of her daughter and what she has accomplished along with generally loving her, she knows that they would be on opposing sides as she is still loyal to Cronus while Athena serves her father Zeus.

Unlike Athena, she is not nearly as conflicted with Zeus and is clear cut about how she feels about her husband. Even though she originally used him, she did start to fall for him which quickly changed into bitterness as he sealed her in his head in paranoia. She does though still posses some of her former affection to him deep in her heart and ponders what would happen if that event never happened. She also finds it ironic that Zeus has two wives as he never divorced her.

However, Metis is not evil and nor possess much of malevolent intent. She is neutral to all living and unliving things and does not distinguish between the divine and moral in any way nor treats then any different. She would thank someone if they do something for her, help someone if it doesn't prove damaging to her plans or simply being respectful to anyone she meets. This is usually done out of pragmaticism then anything else as she knows if treat someone with kindness, they would do the same as well.

Unlike her daughter, she is not gifted for war and combat as that was more of Atlas' role though she is better than Athena in everything else. Metis is also kind of a hypocritic as while she hates Gaia's Machiavellianism, she also possesses it.

Metis was born to Oceanus and Tethys and would be one of the many young titans raised and trained by Cronus when their parents ignored them. She soon would become the royal advisor of the Titan King, having authority equal to Atlas and Hyperion. She would thrive in this role, using her logic to spread the influence of the Titans to beyond the boulders of Greece.

This logic however would soon make her betray her master as Metis would help Zeus overthrow his father. She stated that Cronus lost himself in his forced corruption due to Gaia's machinations and Angra Mainyu's temptation and if he continues to rule, the world would soon go to destruction. She provided Zeus with a potion that would make Cronus sick and throw up his five other siblings, which would officially start the Titanomachy. After the titans were defeated, Zeus would marry Metis.

Metis soon got pregnant and Zeus was given a prophecy: she would give birth to a wise daughter and later a son, who would together overthrow him, much like he had overthrown Cronus, who in turn had overthrown Ouranos. He told her to play a game of changing shapes, and she, forgetting her prudence, accepted. She changed into many animals, but as soon as she turned into a fly, Zeus opened his mouth and ate her.

Within Zeus, Metis gave birth to Athena, for whom she crafted armour and weapons. Athena would then begin to use the spear and shield her mother had made, banging them together which would cause her father a painful headache with the Olympians trying to find out what was happening.

Eventually, Zeus couldn't take his headache anymore and ordered Hephaestus to clove his head with an axe, releasing pressure within, to let out whatever was in there. Athena emerged from Zeus's mind in full glory, wearing the armor her mother made her. Athena was soon made the goddess of wisdom, warfare, and handicraft.

Metis herself is still within Zeus, never being able to give birth to the son, thus securing his eternal reign over the gods. At least, that is what Zeus believed, for despite avoiding fate, Metis is fated to bear a son stronger than his father once she is released from Zeus's gullet. He is also unaware of the fact that his own wife, Hera, will be the catalyst for his downfall which will trigger the impending Second Titanomachy.

It is often said that Athena had no mother and she was born out of Zeus alone; this doesn't necessarily conflict with this account, as the ancient Greeks believed that children were descendants of the fathers, while mothers did not contribute to the creation of their children.

By the era of Greek philosophy in the 5th century BC, Metis had become the mother of wisdom and deep thought, but her name originally connoted "magical cunning" and was as easily equated with the trickster powers of Prometheus as with the "royal metis" of Zeus. The Stoic commentators allegorized Metis as the embodiment of "prudence", "wisdom" or "wise counsel", in which form she was inherited by the Renaissance.

The Greek word metis meant a quality that combined wisdom and cunning. This quality was considered to be highly admirable, the hero Odysseus being the embodiment of it. In the Classical era, metis was regarded by Athenians as one of the notable characteristics of the Athenian character.

Hesiod's account is followed by Acusilaus and the Orphic tradition, which enthroned Metis side by side with Eros as primal cosmogenic forces. Plato makes Poros, or "creative ingenuity", the child of Metis. 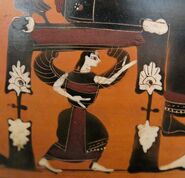 A winged goddess depicted under Zeus' throne, possibly Metis (Art from the Louvre)