Gods and Demons Wiki
Register
Don't have an account?
Sign In
Advertisement
in: Beings, Demon, Hell,
and 6 more

Moloch was a fallen angel-turn-demon and a Prince of Hell.

He was a pagan fertility deity, turned false deity, mentioned in varied theological writings; the most famous of which would be the Christian Bible. He appears in the Old Testament as a god that Moses forbade the Israelites to worship. Moloch worship was practiced by the Canaanites, Phoenician and related cultures in North Africa and the Levant. Moloch is said to be a Demon under Lucifer's command and was the one to give the Oath system in Hell, which later on, was called Moloch's oath.

Moloch took the form of the god of the Moabites, Chemosh, portrayed as a bronze statue with a calf’s head adorned with a royal crown and seated on a throne. His arms were extended to receive the child victims sacrificed to him. Milton wrote that Moloch was a frightening and terrible demon covered with mothers' tears and children's blood.

Rabbis claim that in the famous statue of Moloch, there were seven kinds of cabinets. The first was for flour, the second for turtle doves, the third for an ewe, the fourth for a ram, the fifth for a calf, the sixth for a beef, and the seventh for a child. It is because of this, Moloch is associated with Mithras and his seven mysterious gates with seven chambers. When a child was sacrificed to Moloch, a fire was lit inside the statue. The priests would then beat loudly on drums and other objects so that the cries would not be heard.

He is depicted as a massive humanoid bull, with demonic features.

He is often described as a rash, irrational and murderous demon, who wants to continue to wage war against God and Heaven. Moloch is often disregardful of his own tumulous predicaments, which is evident when he deemed it imperative to take the fight to God even after they were banished and punished for their transgressions.

Although, this was likely because he himself enjoyed the thrill of war so much and was the reason why his suggestion was overruled, likely on the account that Satan recognized that Moloch was more brawn than he is brain and is a fallen angel attributed to warfare and lives for the thrill of combat.

As a fallen cherub, he is naturally superior to the lesser fallen angels that fell to Hell and wears the title of King among the legions of the damned. Moloch is a demon of warfare, and thus is highly skilled in combat to where he was among the leading charges in Lucifer's faction of rebel angels during the War in Heaven. Moloch's skill and power is shown when he fought against Dante and was noted to give the son of Sparda quite the enjoyable bout, only to be overwhelmed by the mighty devil slayer.

According to some 16th century demonologists, Moloch's power is stronger in October.

He is listed among the chief of Lucifer's angels, and is given a speech at the parliament of Hell, where he argues for immediate warfare against God. He later becomes revered as a pagan god on Earth. As a result of a disaster in the wake of the times, the spirit of Moloch had transformed himself into darkness by becoming matter.

Moloch is presented as a foreign deity who was at times illegitimately given a place in Israel’s worship as a result of the syncretistic policies of certain apostate kings. The laws given to Moses by God expressly forbade the Jews to do what was done in Egypt or in Canaan. “You shall not give any of your children to devote them by fire to Moloch, and so profane the name of your God”.

Yet kings such as Ahaz and Manasseh, having been influenced by the Assyrians, are reported to have worshipped Moloch at the hilled site of Topheth, outside the walls of Jerusalem. This site flourished under Manasseh’s son King Amon but was destroyed during the reign of Josiah, the reformer. “And he defiled Topheth, which is in the valley of the sons of Hinnom, that no one might burn his son or his daughter as an offering to Moloch”.

According to the mystical prophecy "Anung Un Rama, Urush Un Rama", Moloch is one of named casualties in a civil war within the ranks Hell, which was started when the cambion Hellboy killed a weakened and crippled Satan using the legendary Twin Blade. With the highest leadership gone, the countless legions of lesser demons turn against the infernal nobles and brutally killed them. Moloch is one of many casualties, alongside Astaroth, Suriel, Uziel, Amdusias, Beelzebub, Behemoth and Leviathan.

However, it is unknown if this prophecy was true or a false prophecy created by Nyarlathotep.

Much like Bael and Mammon, the figure of Moloch was likely based on Pre-Christian deities that were altered into demons with the rise of a monotheistic belief system. Medieval and modern sources tend to portray Moloch as a bull-headed humanoid idol with arms outstretched over a fire, onto which the sacrificial child is placed. This portrayal can be traced back to medieval Jewish commentaries, which connected the biblical Moloch with depictions of Carthaginian sacrifice to Cronus (Baal Hammon) found in sources such as Diodorus, with George Foote Moore suggesting that the bull's head may derive from the mythological Minotaur. John S. Rundin suggests that further sources for the image are the legend of Talos and the brazen bull built for king Phalaris of the Greek city of Acragas on Sicily. He notes that both legends, as well as that of the Minotaur, have potential associations with Semitic child sacrifice.

The etymology of Moloch is uncertain: most scholars derive it from the root mlk "to rule" but with the vowels of bōšet "shame" (first advanced by Abraham Geiger in 1857) or as a qal participle from the same verb. R. M. Kerr criticizes both theories by noting that the name of no other god appears to have been formed from a qal participle, and that Geiger's proposal is "an out-of-date theory which has never received any factual support". Paul Mosca similarly argued that "The theory that a form molek would immediately suggest to the reader or hearer the word boset (rather than qodes or ohel) is the product of nineteenth century ingenuity, not of Massoretic or pre-Massoretic tendentiousness".

Scholars who do not believe that Moloch represents a deity instead compare the name to inscriptions in the closely-related Punic language where the word mlk (molk or mulk) refers to a type of sacrifice, a connection first proposed by Otto Eissfeldt (1935). Eissfeldt himself, following Jean-Baptiste Chabot, connected Punic mlk and Moloch to a Syriac verb mlk meaning "to promise", a theory also supported as "the least problematic solution" by Heath Dewrell (2017). Scholars such as W. von Soden argue that the term is a nominalized causative form of the verb ylk/wlk, meaning "to offer", "present", and thus means "the act of presenting" or "thing presented". Kerr instead derives both the Punic and Hebrew word from the verb mlk, which he proposes meant "to own", "to possess" in Proto-Semitic, only later coming to mean "to rule"; the meaning of Moloch would thus originally have been "present", "gift", and later come to mean "sacrifice".

Later commentators have compared these accounts with similar ones from Greek and Latin sources speaking of the offering of children by fire as sacrifices in the Punic city of Carthage, a Phoenician colony. Cleitarchus, Diodorus Siculus and Plutarch all mention burning of children as an offering to Cronus or Saturn, that is to Baal Hammon, the chief god of Carthage. It has been suggested that the practice of child sacrifice may have been exaggerated in Roman post-war propaganda in order to make their arch-enemies seem cruel and less civilized.

Diodorus also relates that relatives were forbidden to weep and that when Agathocles defeated Carthage, the Carthaginian nobles believed they had displeased the gods by substituting low-born children for their own children. They attempted to make amends by sacrificing 200 children of the best families at once, and in their enthusiasm actually sacrificed 300 children.

Freeman in The History of Sicily from the Earliest Times (1894) states that the Carthaginian nobles had acquired and raised children not of their own for the express purpose of sacrificing them to the god. The author states that during the siege, the 200 high-born children were sacrificed in addition to another 300 children who were initially saved from the fire by the sacrifice of these acquired substitutes. 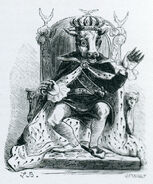 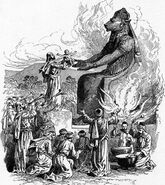