Gods and Demons Wiki
Register
Don't have an account?
Sign In
Advertisement
in: Location, Planet, Motive,
and 2 more

The Morning Star, also known as Venus, Phosphorus, Heosphorus or Eosphorus, is a planet located in the same solar system as Earth.

As it appears in the east before sunrise, many cultures connected it with their religions, the most famous of which was the Roman goddess Venus, after who'm the planet would eventually be officially referred as. The planet was often used in astrology and predicting future events.

The morning star is an appearance of the planet Venus, an inferior planet, meaning that its orbit lies between that of the Earth and the Sun. Depending on the orbital locations of both Venus and Earth, it can be seen in the eastern morning sky for an hour or so before the Sun rises and dims it, or (as the evening star) in the western evening sky for an hour or so after the Sun sets, when Venus itself then sets. Venus is the brightest object in the sky after the Sun and the Moon, outshining the planets Jupiter and Saturn but, while these rise high in the sky, Venus never does. This may lie behind myths about deities associated with the morning star proudly striving for the highest place among the gods and being cast down.

As the brightest natural object in Earth's night sky after the Moon, Venus can cast shadows and can be, on rare occasions, visible to the naked eye in broad daylight. Venus lies within Earth's orbit, and so never appears to venture far from the Sun, either setting in the west just after dusk or rising in the east a little while before dawn. Venus is a terrestrial planet and is sometimes called Earth's "sister planet" because of their similar size, mass, proximity to the Sun, and bulk composition. It is radically different from Earth in other respects. As one of the brightest objects in the sky, Venus has been a major fixture in human culture for as long as records have existed. It has been made sacred to gods of many cultures, and has been a prime inspiration for writers and poets as the "morning star" and "evening star". Venus was the first planet to have its motions plotted across the sky, as early as the second millennium BC.

While at an early stage the Morning Star (called Phosphorus and other names) and the Evening Star (referred to by names such as Hesperus) were thought of as two celestial objects, the Greeks accepted that the two were the same, but they seem to have continued to treat the two mythological entities as distinct. Halbertal and Margalit interpret this as indicating that they did not identify the star with the god or gods of mythology "embodied" in the star.

Phosphorus is the planet Venus in its appearance as the Morning Star. Another Greek name for the Morning Star is Heosphorus, meaning "the dawn-bringer". The form Eosphorus is sometimes met in English. As an adjective, the Greek word φωσφόρος is applied in the sense of "light-bringing" to, for instance, the dawn, the god Dionysus, pine torches, the day; and in the sense of "torch-bearing" as an epithet of several gods and goddesses, especially Hecate but also of Artemis/Diana and Hephaestus. Objectively, Venus is the "light bringer" as she appears most brightly in the sky in December (optical illusion due to days being shorter); the most regular appearance of the planet signaled a beginning of "rebirth" phase where the days would get longer and winter would end.

In the philosophy of language, "Hesperus is Phosphorus" is a famous sentence in relation to the semantics of proper names. Gottlob Frege used the terms "the evening star" (der Abendstern) and "the morning star" (der Morgenstern) to illustrate his distinction between sense and reference, and subsequent philosophers changed the example to "Hesperus is Phosphorus" so that it utilized proper names. Saul Kripke used the sentence to posit that the knowledge of something necessary — in this case the identity of Hesperus and Phosphorus — could be discoverable rather than known a priori.

Entities related to the Morning Star 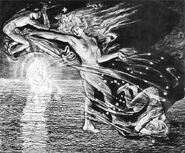 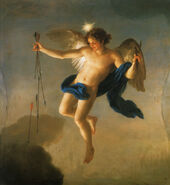