Gods and Demons Wiki
Register
Don't have an account?
Sign In
Advertisement
in: Articles that need art credits, Beings, Human,
and 12 more

Moses, also known as Destroyer of Pantheons, was the Old Testament prophet who wrote the Torah and the first writer of the Bible. He was also the one who freed the Israelites from Egypt with the Arm of Yahweh and was considered the greatest prophet on Earth.

He was a former Egyptian prince who later in life became a religious leader and lawgiver, to whom the authorship of the Torah, or acquisition of the Torah from Heaven is traditionally attributed. Also called Moshe Rabbenu in Hebrew, he is the most important prophet in Judaism. He is also an important prophet in Christianity, Islam, Bahá'í Faith as well as a number of other faiths.

It is believed that Moses will return in the Apocalypse as one of the Two Witnesses of the Apocalypse to battle the Beast that rises from the Abyss, and to guide humanity back to God, alongside Elijah.

Little is known about his original appearance, but Moses during the Exodus was already about 80 years old, and probably dressed in classic Israelite clothing that covered his entire body. He also carried a stick made of sapphire that weighed 5kg.

During the 21st century, when he returned as one of two witnesses, he assumed the appearance of a 30-year-old man, with a bushy beard and neat hair and a well-defined physique. He wore a brown jacket and dark blue pants. Ironically, Moses was not used to the current fashion of the planet and even said that he preferred his old clothes. He keeps his sapphire stick.

Moses is a man known for his courage and determination, chosen by Yahweh Himself to lead Israel's deliverance from Egypt. In The Zohar, Moses is called the greatest prophet of God, as unlike other prophets like Isaiah, Daniel and Elijah, who were afraid to see a manifestation of God, Moses, when he saw Yahweh in the Burning Bush, was not afraid. However, he was very insecure when Yahweh told him to go to Egypt, even mentioning that he had a problem with words as an excuse for Yahweh to send another. But after being encouraged by Yahweh, he decided to go to Egypt again and face his brother, the pharaoh of Egypt.

Due to his success in freeing the Hebrews and leading the Israelites for 40 years in Egypt, he was given the honorable mission to return to Earth during Apocalypse to face the Beast of Apocalypse with Elijah. Moses however, is not perfect, as even being considered the greatest prophet of God, when Yahweh told him to ask the rock to give them water, Moses lost control in a moment of anger and disobeyed Yahweh's word, hitting the rock instead to ask, what did with Yahweh not allow Moses to enter the Promised Land.

Moses is known to be the greatest prophet of God, as when looking at a manifestation of God himself before his eyes, unlike other prophets, Moses was not afraid. Showing that he really was worthy to serve as God's first writer to deliver His Word and deliver the Hebrews out of Egypt. The chaos that Moses caused in the Egyptian pantheon was so great that it is said that Egypt has never been the same since its passage through that place. He was known as "Terror of the gods", "Judge of the gods" and "destroyer of pantheons" for the enormous damage that was left by him in Egypt and the humiliation that the gods of Egypt underwent with each plague.

According to Kabbalistic legends, when Moses opened the Red Sea, what the Prophet did not only divide the sea into two halves, but he reversed all the water sources on the planet, making them go backwards, circumventing the laws of physics. In the 21st century, Moses was no longer allowed to use the Explicit Name of God as it was not his destiny to end the Beast of the Sea. But, Moses remained with his staff, being able to perform countless other miracles for the planet.

However, most feats were accomplished through his staff and the Explicit Name of God. Without them, Moses is just an ordinary man.

Moses was born in a time when his people, the Israelites, an enslaved minority, were increasing in numbers within Egypt. In time, the Pharaoh became worried that Hebrew slaves might ally themselves with Egypt's enemies in rebellion, toppling the great empire. In order to prevent this, Pharaoh ordained the mass genocide of all the male Hebrew infants, commanding his soldiers to toss them into the Nile so that they may be feasted upon by the crocodiles of Sobek as to reduce the population of the Israelites.

Upon learning of this new edict, Moses' Hebrew mother, Jochebed, secretly hid her newborn son away for 3 months, until she could no longer risk him being discovered. Finally, she took a basket made of papyrus plants and coated it with tar and pitch. She put the baby in it and set it among the papyrus plants near the bank of the Nile River. The baby’s sister stood at a distance to see what would happen, and watched as the Nile river carried the basket through its turbulent waters until it finally came to rest at an entrance to the palace of the Pharaoh.

The Pharaoh's daughter, identified as Queen Bithia in the Midrash, upon discovering the Moses as a foundling from the Nile river, adopted him and raised him in the Egyptian royal family alongside his adoptive brother. One day after killing an Egyptian slave-master, because the slave master was smiting a elderly Hebrew to death, Moses fled across the Red Sea to Midian, where he encountered The Angel of the Lord, speaking to him from within a burning bush on Mount Horeb; which he regarded as the Mountain of God.

Yahweh sent Moses back to Egypt to demand the release of the Israelites from slavery. Moses said that he could not speak with assurance or eloquence, so Yahweh allowed Aaron, his brother, to become his spokesperson. After the Ten Plagues, Moses led the Exodus of the Israelites out of Egypt and across the Red Sea, after which they based themselves at Mount Sinai, where Moses received the Ten Commandments. After 40 years of wandering in the desert, Moses died within sight of the Promised Land on Mount Nebo.

After his death, Satan (or Lucifer) tried to capture Moses' body, presumably to possess him and discover the secret behind Shem HaMephorash and use his staff, forcing Archangel Michael to interfere and battle the Devil. Due to the devil's enormous power, Michael could not defeat him, so the Archangel said "may the Lord rebuke you" and the manifestation of God caused the devil to flee. Michael then buries Moses' body and his staff so that no one will find him again until the Great Day.

Moses returns to Earth during the Apocalypse, this time alongside the prophet Elijah, to fight the Beast that rises from the sea. 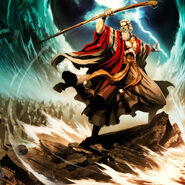 Moses allowing the Hebrews to pass (Art by GENZOMAN)

Moses with the Ten Commandments (Art by ???)

Moses when he was a prince of Egypt (Art by davidkawena)

Moses and his wife Tzipporah (Art by gemmingi)

Moses descending from Sinai (Art by ???)