Gods and Demons Wiki
Register
Don't have an account?
Sign In
Advertisement
in: Beings, Demon, Fallen,
and 5 more

Mulciber is a demonic architect that serves in the legions of Mammon, specifically the Architects of Mammon.

He is one of the fallen angels-turned-demons, who serves under the demon lord Mammon. Before his fall, Mulciber was an Angel in Heaven who served as the chief architect of heaven, designing the countless palaces in the celestial plane so that he may honor God.

Mulciber didn't like Heaven’s authoritarian ways, as he wanted more freedom when working or making designs, and just didn’t like the way God ruled things.

Mulciber was the grand architect of Heaven, the angel known for having designed the many stunningly beautiful palaces for God. He mostly found solace in his work and not wanting to have anything to do with the other angels. He did, however, have a healthy working relationship with Jophiel at the time with it even resembling something of a teacher/student relationship.

As more of the compounds of Heaven were being constructed the more there were rules being enforced to establish the hierarchy. Mulciber was one of the angels who resented the rules being made in Heaven as they would limit his working capabilities.

During the War in Heaven he decided to side with Lucifer, and assisted him by navigating his troops through the heavenly cities, bringing his side much success as they strategically routed and overwhelmed the forces of light. Mulciber was ultimately defeated at the hands of Michael, deposed of his position and cast into Hell along with the rest of the fallen as the demonic army descended into a disorganized final frenzy.

In Hell, he continued being an architect and led the construction of Pandemonium, the new capital of Hell, which was built within one hour, but is greater than any known human structure in scope. This period of time shortly after the fall is when Mulciber is believed to have been the most active.

Mulciber was commissioned by Mundus to build seven gates so that the legions of Hell may pass through in a bid to conquer the mortal world. While it was no easy task, as the material required to properly sustain the dimensional energies emitted by the Convergence had Mulciber search even beyond the borders of Hell, Mulciber nonetheless succeeded. He set the Seven Gates in place to act as conduits for the Convergence, using the event's energies to form temporal windows for the demons to pass through unharmed.

At some point in later, Mulciber and Mammon aided Azazel in the construction of the Right Hand of Doom and grafted it onto the right arm of Hellboy, his newborn son. However, some of the monarchs of Hell discovered their plans and invoked Hell's Secret Police to detain or destroy them while the rest were apprehended by the Erinyes. Mulciber survived the ordeal but was punished by Beelzebub and was planed to be thrown into Treachery. However, Mammon was able to free his servant by saying that Azazel was using his servant for his own purposes without informing the architect that Azazel was planning to go against infernal empire.

Unbeknownst to Beelzebub and other nobles, however, Mulciber would continue his work under Azazel's instructions, creating the fabled Abyssal Army using the fires of Hell to mold the damned souls of Treachery into an infernal legionnaire. He has been doing this tirelessly until the promised End of Days.

Mulciber's character is based on a Greek mythological figure known for being a poor architect, but in Milton’s poem, he is one of the most productive and skilled devils in Hell.

As the god of fire, Vulcan has a deep historical association to the fire which emerges out from under the earth. But, more aptly, this mythological figure has been most often depicted with a blacksmith’s hammer, as it was one and the same Mulciber who introduced Cain to the secrets of metallurgy needed to construct the first city.

Mulciber as the Demon Spawn (Art by ChrisCold) 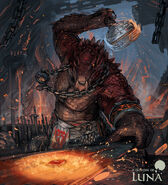 Mulciber as a blacksmith (Art by ThemeFinland)