Gods and Demons Wiki
Register
Don't have an account?
Sign In
Advertisement
in: Articles that need art credits, Location, Space,
and 2 more

A Multiverse is a overall massive collection of universes and timelines.

A Multiverse consists of a very large number of universes, millions of which have been cataloged as universal streams. Together, these universes comprise everything that exists: the entirety of space, time, matter, energy, and the physical laws and constants that describe them. Between these streams, outside of time and space, exists the inter-dimensional void of transwarp. On a cosmic scale, travel between universes is comparatively rare, but there exist certain groups and individuals dedicated to monitoring, moving between, and/or protecting the many worlds of a Multiverse.

The structure of a multiverse, the nature of each universe within it, and the relationships among these universes differ from one multiverse hypothesis to another. Multiple universes have been hypothesized in cosmology, physics, astronomy, religion, philosophy, transpersonal psychology, and literature, particularly in science fiction and fantasy. In these contexts, parallel universes are also called "alternate universes", "quantum universes", "interpenetrating dimensions", "parallel dimensions", "parallel worlds", "alternate realities", "alternate timelines", and "dimensional planes".

A multiverse is based on the supposition that what we have to this point considered to be “the universe” is but a small component of a vast, possibly infinite, assemblage of universes. A multiverse principle is an attempt to evade evidence for the apparent fine-tuning of cosmic laws, values and constants such that the universe would be conducive to bio-habitability. The core thesis of a multiverse concept attempts to expand one’s probabilistic resources beyond that which is available in the observable universe such that the likelihood of attaining a single bio-habitable universe by chance is rendered more plausible.

There are several fundamental problems with this proposition, the key problem being that it is both unnecessary and ad hoc. There is no good scientific reason to think that we reside in one universe within a multitude of parallel universes. There is also no reason to think that there should be a mechanism for generating such universes, each with its own fundamental constants and values.

The proposition thus only succeeds in throwing the paradox back one step, as one could then easily ask who built the generator to give rise to this cosmic lottery. A second difficulty with this hypothesis is that a universe which is in a state of continuous expansion cannot be eternal. It stands to reason, therefore, that it is possible only a finite number of universes could have been generated, and there is no guarantee that a finely tuned bio-habitable universe would have emerged. However, a Multiverse is quite small compared to the Omniverse.

The concept of multiverses appear many times in Hindu texts:

Infinite other universes are mentioned in Buddhist texts such as the Apannaka Jataka:

The Root of Time (Art by Psyxis)

A journey through the Multiverse (Scene from Doctor Strange) 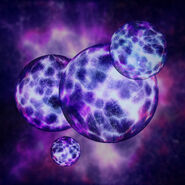 Multiple Multiverses within the Megaverse (Art by Alkinoy Cyber)

Several universes interconnected by Hyperspaces, with the Overvoid in the background (Art by Tobias Roetsch)