Gods and Demons Wiki
Register
Don't have an account?
Sign In
Advertisement
in: Beings, Hell, Serpents,
and 3 more

Serpent, Nāḥāš, the Ancient Snake, the Trickster, the Tempter, the Damned, Ophiomorphis, Nahash

Nachash, simply known as The Serpent, is considered to be one of Satan's earliest incarnations and the one by which he successfully tempted Adam and Eve into eating the Forbidden Fruit and thus brought upon the Fall of Man.

While it is widely accepted that Nachash is a form of the Devil, others believe that Nachash is a separate entity acting as an agent of chaos and disorder. Another is that Satan or (Lucifer) actually possessed the Serpent to hide from the patrolling Cherubim. Regardless, Nachash became a symbol of manipulation and distrust through the modern world of man.

Much like how Satan and Lucifer had originally been free to wander Heaven as an angel so to was the Serpent an accepted member of God's Earthly paradise (known as the Garden of Eden) and was blessed alongside all other animals; it is believed that Nachash originally walked on legs like other animals.

In Genesis, Nachash is portrayed as a deceptive creature or trickster, who promotes as good what God had forbidden and shows particular cunning in its deception.

Nachash has the ability to speak and to reason: "Now the serpent was more subtle (also translated as "cunning") than any beast of the field which the Lord God had made".

Just as Lucifer had caused rebellion in Heaven so too did the eternal trickster manage to cause rebellion in the Garden of Eden. As punishment for what he had done to Adam and Eve, God removed Nachash's limbs and cursed him, alongside every other serpent in existence, to slither forevermore across the ground.

There is no indication in the Book of Genesis that the serpent was a deity in its own right, although it is one of only two cases of animals that talk in the Pentateuch.

Nachash is also occasionally believed to be another form of Lilith, Adam's original wife, later succubus and Mother of Demons; this only applies to those who believe in that particular telling of the Biblical tale. According to this particular tale, after Lilith returned to the Garden of Eden to find Adam married to Eve, she vowed revenge by tempting Eve into eating the Forbidden Fruit, assuming the form of the Serpent.

Although she appeared as having a snake's tail from the waist down, thus becoming an inspiration to the infamous Lamia.

Nachash and the Devil (Art by Cambion-Art)

Nachash tempting Even with Adam watching (Art by Godsartist)

Nachash while being "possessed" by Satan (Art from the Creation Museum) 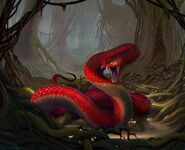 Nachash before being cursed by God (Art by IsisMasshiro)