Gods and Demons Wiki
Register
Don't have an account?
Sign In
Advertisement
in: Beings, Deity, Mythology,
and 11 more

She was said to be the first and the prime creator, who created the universe and all it contains, and that she governs how it functions She was the consort of the gods Khnum and Set, and mother of Serket, Sobek, Heka, and Tutu. She stands watch over Duamutef, one of the Four Sons of Horus, who guards the canopic jars in the tombs and also appears alongside Osiris, Anubis, and Thoth as a just judge of the dead in the afterlife.

In the same way, Neith invented birth and gave life to humanity but was also there at a person's death to help them adjust to the new world of the afterlife. She helped to dress the dead and open the way for them to the afterlife and the hope of immortality and paradise in the Field of Reeds. As she was associated with weaving, she became linked to the goddesses Tatet and Nephthys who helped prepare the dead souls to move forward and also with Qebhet who cared for the dead and made sure they had cool water to drink as they awaited judgment.

Neith performed this same function as it is said that her spittle created the serpent monster Apep who nightly tried to destroy the boat of the sun god and so return the order of the universe to chaos and, at the same time, she was the mother of the sun god and his protector. She is depicted as destroying her child Apophis and, at the same time, creating him as she is also seen as protecting her son Ra while having created his arch enemy; in all of this, balance was achieved.

Neith is frequently depicted as a woman wearing the red crown sitting on her throne holding either a scepter or a bow and two arrows. Her principal emblem was a pair of crossed arrows shown against the background of a leather shield. A further emblem was a bow case, which the goddess was sometimes depicted wearing on her head in place of a crown. She is also sometimes seen as a cow, linking her with Hathor or with the Great Cow who was mother to Ra. She was a war goddess, goddess of creation, mother goddess who invented birth, and funerary goddess who cared for and helped to dress the souls of the dead.

As one of the eldest goddesses, Neith emerged from the primeval waters of Nun that created the world. As time went on and myths evolved, Neith took on other characteristics and responsibilities. Although originally a hunter and warrior, and always considered a great protector of the Egyptian people, she was also a wise mediator between gods, as well as between humanity and the gods. In addition, Neith cared for the dead and helped to dress their souls in preparation for the afterlife.

Neith was the tutelary deity of Sais, where her cult was centered in the western Nile Delta of Lower Egypt even after her attributes were largely given to Isis and Hathor with those goddesses became more popular in Egypt. Neith continued to be honored as the patron goddess of Sais throughout Egypt's history as she was considered a great protector of the people of the land and the most effective mediator between humanity and the gods. It is attested as early as the First Dynasty with several queens being named after her. Neith was also one of the three tutelary deities of the southern city of Latopolis which was located on the western bank of the River Nile some 55 kilometres south of Luxor (Thebes). She also became an important goddess in the capital city of Memphis.

Neith appears human, though certain legends suggest a gender duality and able to give birth without a partner involved. Unlike some deities with such imagery she is always feminine in form, though given phallic imagery.

In her current appearance, Neith is described as beautiful in a battle-hardened way. She is thin and pale with high cheekbones, sunken eyes and arched eyebrows, like a supermodel walking between the line of severity and allure. Her hair is glossy black, braided on each side with flint arrowheads. She has a haughty expression which says: "I'm much too cool to even look at you." There is nothing glamorous in her clothes though, she was dressed for hunt in desert colored fatigues-beige, brown and ochre, much like an American Army uniform. A quiver was strapped to her back, and her bow looked like quite a serious weapon-polished wood carved with hieroglyphs of power. It is also suggested that she wore a silver dagger at her waist and a retractable spear with her quiver, other battle and hunting weapons.

Neith is always represented as extremely wise and just. She is paranoid, believing in some kind of huge conspiracy, and had been wisely preparing a huge bunker for when Apep broke free. She also collects war spoils from her prey, such as the pockets from the magicians and daemons she defeated, collecting them on a string.

Neith is also very unknowledgeable on modern world products, falling for a hunter's fast-talk about "surviving on nothing but the juice of the Ribena" and "hunting the feared Jelly Babies in the wilds of Charing Cross station". Despite this, she is an extremely skilled tracker, wise strategist, fierce warrior, and huntress.

Neith, since is a hunting goddess, in addition to standard powers of a goddess, possess superhuman hearing, reflexes, and speed. She is very agile though and does not prefer to use any enchantment and often relies at the weapons all of the time. When she is, though, she is very powerful and her magic is strong and causes great damage. She did, at a time, conjured a memory of the past, and judging from it, Neith can bring one to the shadow of the past, her refuge during the ancient times.

Her name may be interpreted as meaning water. In time, this meaning led to her being considered as the personification of the primordial waters of creation. She is identified as a great mother goddess in this role as a creator.

Theorists offer the possibility that the myths of the goddess Neith may have had an influence on both the Old and New Testament. The book of Genesis reveals that god effected creation by bringing light to the dark waters, which is very similar to the creation story of Neith. Neith was the "Virgin Mother Goddess" that predated Mary, the virgin mother of Jesus. 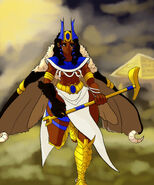 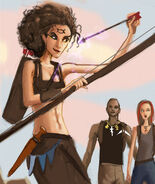