Gods and Demons Wiki
Register
Don't have an account?
Sign In
Advertisement
in: Races, Abrahamic, Human,
and 8 more

The Nephilim were a race of often man eating giants described in the Christian Bible and were sometimes depicted as the hybrid offspring of "the sons of God" and the "daughters of men". The "sons of God" were actually fallen angels particularly known as the Watchers.

The Nephilim were fearsome creatures and took to terrorizing the other creatures of the Earth, foremost amongst them humanity, this behavior was unacceptable to God who, according to some sects, decided to send forth the Great Flood to rid the world of the abominations before they could do more harm to humanity.

Some of the Nephilim, or their descendents, did manage to survive the Flood. Or perhaps it is possible that more Nephilim were born from unions of human females and angel. It is later revealed that some of the Nephilim did indeed survive, albeit in great smaller numbers, after the Flood but were no longer considered a threat to God's creation. In some texts the ancient Hebrews encountered some of these surviving Nephilim on their way to the Promised Land.

Overtime, the surviving Nephilim were slaughtered by the humans themselves, or more specifically human tribes that sought out to drive these giants from their lands. While they were regarded as Nephilim, they were in actuality, the decendants of the Nephilim of old age that survived the Great Flood.

While many scholars believe that the Nephilim were a myth, excavations say otherwise due to the fact that many have been finding humanoid skeletons buried deep in the Earth, and some were even 15 to 20 feet tall in height.

A common prejudice against the Nephilim is the fact that they are considered cruel and evil beings, driven only by a bloodthirsty instinct to devour everything in front of them. However, the reality is quite different, while it's true that there are plenty of evil Nephilim, that doesn't mean the race is inherently evil. The truth is that the most famous Nephilim in the supernatural world are lovers of justice and defenders of Earth and light, with one of them, the Daughter of Michael, being theorized as a possible successor to God.

Some theorize that the wife of patriarch Noah or the wives of Noah's sons were Nephilim, which would explain why Nephilim still exist even after more than a thousand years after the Flood, like the famous Giant Goliath. If God allowed the Nephilim to enter the Ark with Noah, it shows that God has no problem with the Nephilim and loves them the same way He loves all of His Creation.

The most notable feature of the Nephilim is their colossal size, with some measuring between 15 to 20 feet (4,5 to 6 meters) in height, although there is evidence of Nephilim up to 328 or 656 feet (100 or 200 meters) in height, so large that they could be considered Kaijus. It is believed that this colossal size is due to its extraordinarily large power. Because it is so much power, the mortal body cannot contain so much destructive energy, requiring an absurd growth of mass to contain such energy.

The Brown-Driver-Briggs Lexicon (1908) gives the meaning of nephilim as "giants", and holds that proposed etymologies of the word are "all very precarious." Many suggested interpretations are based on the assumption that the word is a derivative of Hebrew verbal root n-p-l (נ־פ־ל) "fall." Robert Baker Girdlestone argued in 1871 the word comes from the hif'il causative stem, implying that the nephilim are to be perceived as 'those that cause others to fall down'. Ronald Hendel states that it is a passive form: 'ones who have fallen', grammatically analogous to paqid 'one who is appointed' (i.e., a deputy or overseer), asir 'one who is bound' (i.e., a prisoner), etc.

The majority of ancient biblical translations – including the Septuagint, Theodotion, Latin Vulgate, Samaritan Targum, Targum Onkelos, and Targum Neofiti – interpret the word to mean "giants." Symmachus translates it as "the violent ones" and Aquila's translation has been interpreted to mean either "the fallen ones" or "the ones falling (upon their enemies)."

In the Hebrew Bible

In the Hebrew Bible, there are three interconnected passages referencing the nephilim. Two of them come from the Pentateuch and the first occurrence is in Genesis 6:1–4, immediately before the account of Noah's Ark. Genesis 6:4 reads as follows:

Where the Jewish Publication Society translation simply transliterated the Hebrew nephilim as "Nephilim", the King James Version translated the term as "giants." The nature of the Nephilim is complicated by the ambiguity of Genesis 6:4, which leaves it unclear whether they are the "sons of God" or their offspring who are the "mighty men of old, men of renown." Richard Hess takes it to mean that the Nephilim are the offspring, as does P. W. Coxon.

The second is Numbers 13:32–33, where ten of the Twelve Spies report that they have seen fearsome giants in Canaan:

Outside the Pentateuch there is one more passage indirectly referencing nephilim and this is Ezekiel 32:17–32. Of special significance is Ezekiel 32:27, which contains a phrase of disputed meaning. With the traditional vowels added to the text in the medieval period, the phrase is read gibborim nophlim ("fallen warriors" or "fallen Gibborim"), although some scholars read the phrase as gibborim nephilim ("Nephilim warriors" or "warriors, Nephilim"). According to Ronald S. Hendel, the phrase should be interpreted as "warriors, the Nephilim" in a reference to Genesis 6:4. The verse as understood by Hendel reads.

Brian R. Doak, on the other hand, proposes to read the term as the Hebrew verb "fallen" (נופלים nophlim), not a use of the specific term "Nephilim", but still according to Doak a clear reference to the Nephilim tradition as found in Genesis.

A Nephilim (Art by JasonEngle)

A Nephilim killing a Dinosaur (Art by Eedenartwork)

A female Nephilim manifests her wings (Art by Carlos-Quevedo) 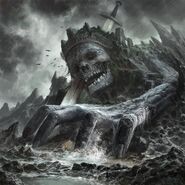