Gods and Demons Wiki
Register
Don't have an account?
Sign In
Advertisement
in: Beings, Deity, Egyptian,
and 11 more

Nun, also known as Naunet, was the Primordial Egyptian deity of chaos, void, and the primordial seas.

Water was represented by Nun and Naunet (the female form). Although the Egyptians had many different creation myths, they all agreed that the universe came from the primordial waters of Nun, and many legends suggested that everything would slip back under these waters at the end of the world. Not much is known about Nun, except that he was seen as the personification of the primordial watery abyss and "the Father of the Gods". He was often seen as the sole parent of Ra, Atum, and Amun.

Nun is often associated with the forces of chaos. When Ra decided that the people were not giving him the respect he was due, it was Nun who suggested that Re should send out his 'eye' to destroy mankind and end the world. However, unlike the water serpent Apep (who was the enemy of Ra and a purely destructive force) Nun had a positive aspect. Nun protected Shu and Tefnut from the forces of chaos, as represented by demonic snakes. According to one myth, it was Nun who told Nut to transform herself into a solar cow and carry Ra across the sky because he had become old and weary.

Nun was represented as a frog or a frog-headed man (as a member of the Ogdoad) but could also be depicted as a bearded man with blue or green skin (reflecting his link with the river Nile and fertility). In the latter form he can look fairly similar to Hapi, the god of the Nile, and often appears either standing on a solar boat or rising from the waters holding a palm frond (a symbol of long life), Occasionally, he appears as a hermaphrodite with pronounced breasts. 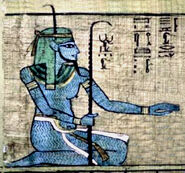 As Naunet (Art by Yliade) 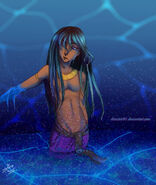