Gods and Demons Wiki
Register
Don't have an account?
Sign In
Advertisement
in: Beings, Deity, Mythology,
and 14 more

Nyx is the primordial Greek goddess (and personification) of the night, her name means "the mother night."

Nyx is one of the Protogenoi, primordial Deities of Greco-Roman mythology. The protogenoi were the first entities or beings that come into existence, they form the very fabric of the universe and as such are truly immortal. Everything in existence is born of them, including the Titans and the Olympian gods. Unlike the Titans, when overthrown by the next generation of deities, the protogenoi didn't lose their power or position, for the very simple reason that they form the existence.

A shadowy figure, Nyx stood at or near the beginning of creation born of Khaos and mothered other personified deities such as Hypnos (Sleep) and Thanatos (Death), with Erebus (Darkness). Her appearances are sparse in surviving mythology, but reveal her as a figure of such exceptional power and beauty that she is feared by Zeus himself. She was called the subduer of gods and men, and relates that even Zeus himself stood in awe of her. In the ancient cosmogonies Night is one of the very first created beings, for she is described as the daughter of Khaos, and the sister of Scotus, by whom she became the mother of Aether and Hemera.

She is depicted as a goddess draped in long flowing black robes that are coated with the void of space and glimmering distant stars. Her appearances in mythology are sparse, but reveal her as a figure of exceptional power. In ancient art, Nyx was depicted as a either a winged goddess or charioteer, sometimes crowned with an aureole of dark mists. In later poets, with whom she is merely the personification of the darkness of night, she is sometimes described as a winged goddess, and sometimes as riding in a chariot, covered with a dark garment and accompanied by the stars in her course.

Nyx's main physical form has her appear as a fair-skinned woman with short white hair down to her cheek, with two huge strands on the back of her head that run to her legs. She has a mature figure and relatively large breasts. She wears a beautiful gothic dress, she usually covers her eyes with a helmet on her head. However, when without him it is revealed that their eyes appear to be purple or gray.

As a Primordial, Nyx's personality isn't truly describable as it can differ according to the entity.

According to her family and children, Nyx displays a motherly personality. She is seen as warm, caring and just a person who you can let your guard down around. Like her husband, she cares for all things that come under her care, treating them as she would her own children even if they aren't her children as shown with her attitude towards Hades, Hecate and others.

Like her husband, Nyx holds completely amorality to any mortal being or race as their troubles and woes mean nothing to a primordial beings like herself. However, Nyx has been shown to hold great animosity for most of humanity, despising what they are and what they did to her and her family. It is said that during the Great Flood, Nyx watched with utter glee as humanity was destroyed by God but accepted the fact that a couple were able to survive. Like her husband, she holds a grudging respect for humans. Nyx admits that their tenacity is what allowed them to survive for so long and become numerous species, stating that if they didn't learn to band together, they would have been wiped out.

As one of the Protogenoi, Nyx is an extremely powerful deity feared by mortals and gods alike. Zeus himself feared her enough to retract all threats against her son Hypnos and regretted even touching Nemesis. She is stated to be one of the most powerful out from Protogenois, rivaled only by Erebus and Tartarus and suspassed by Chronos and Khaos

In the beginning there was nothing and then suddenly all came, being so different from nothingness, bothered him. The Nothing was Khaos and the All was God, the two of them waged a bloody war then to determine who would dominate the Void beyond all Voids. On his side, the Most High, also nicknamed The Shining, created four beings of immeasurable powers to help him. Khaos, on the other hand, created a legion of primordials, among them, the goddess of night Nyx and beside him, Erebus, the god of darkness, a pair of twins who helped Khaos in battles fought deep in the primeval pits. After the battle was over, Scotus and Nox mated and had several children, among which were: Aether, Hemera, Apate, Clotho, Eris, among many other Second Generation Primordial that make up the Greco-Roman pantheon.

In the beginning, there was the Khaos, and from Khaos came Erebus and Nyx, a pair of god twins who embodied aspects of the absence of light; Erebus was darkness itself and Nyx was night, being in some sense related to Ouranos - the starry sky. The pair of twins generated some new gods: Hypnos (sleep) and Thanatos (death), twins just like their parents, after all death and sleep are similar, but not the same, similar to night and darkness. They also had Aether (light) and Hemera (day), between others.

One account that details Zeus' fear of Nyx is when Hypnos, the god of sleep, reminds Hera of an old favor after she asks him to put Zeus to sleep. He had once before put Zeus to sleep at the bidding of Hera, allowing her to cause Heracles, who was returning by sea from Laomedon's Troy, great misfortune. Zeus was furious and would have smitten Hypnos into the sea if he had not fled to Nyx, his mother, in fear. In fact, the king of the gods was fearful to the point where he held his fury at bay and in this way Hypnos escaped the wrath of Zeus by appealing to his powerful mother. He disturbed Zeus only a few times after that always fearing Zeus and running back to his mother, Nyx, who would have confronted Zeus with a maternal fury.

Nyx lived in Tartarus with her daughter Hemera. During the day, Nyx would leave Tartarus (while Hemera was returning) and fly up out of the Underworld and bring Erebus together making it night time. When Nyx came back to Tartarus, Hemera left and scattered Erebus thus, revealing Aether and making it day. Later Eos the goddess of dawn came along and gave them a break. After that when Hemera arrived, Eos would leave then Nyx would leave.

Versions of her birth and origins vary, but one interpretation has her as a creator goddess, laying a silver egg that produces the gods responsible for the creation of the world. Khaos didn't exist and Nyx was the first divine Entity, promoting her power and importance even more. One example is that the Moirai, her daughters serve her. Orpheus ascribes to her the generation of gods and men, and says, that all things had their beginning from her.

The goddess of the night (Art by William-Adolphe Bouguereau)

Nyx and Erebus (Art by Dianaiiz)

Nyx and Erebus on a date (Art by Port of Zelda)

Nyx and Selene (Art by IrenHorrors)

The Queen of Night (Art by shadowgirl)

Nyx with her eldest children (Art by Pedro Américo) 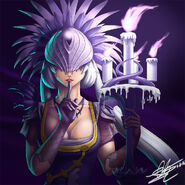 As Nox (Art by Iosh Kun) 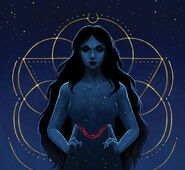