Gods and Demons Wiki
Register
Don't have an account?
Sign In
Advertisement
in: Rank, Angel, Heaven,
and 6 more

Ophanims, also known as Thrones, are a choir of celestial beings in Abrahamic pantheon. They are described in the Book of Enoch as with the Cherubim and Seraphim as never sleeping, they are known for their wisdom.

They never sleep, because they are constantly busy guarding God's throne in Heaven. Ophanim are commonly called Thrones (and sometimes "wheels").

Their names are having the meaning of "wheel", as such they are described as having their spirits encased inside wheels that moved along with them wherever they went. The Ophanim's wheels are covered with eyes, which symbolize their constant awareness of what is occurring around them and how well those activities align with God's will.

Ophanim angels are constantly reflecting on God's will so that they can understand and follow it wisely. The Ophanim explain God's will to other beings that the Creator has made (humans included) to help all develop greater wisdom. 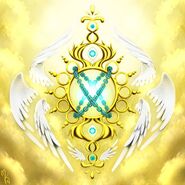