Gods and Demons Wiki
Register
Don't have an account?
Sign In
Advertisement
in: Articles that need art credits, Beings, Mythology,
and 12 more

The Ouroboros Dragon is an ancient pre-existential primordial entity that appears as a cosmic serpent or dragon which is depicted as eating its own tail.

The Ouroboros is an ancient symbol depicting a dragon or a serpent that endlessly swallows its own tail to form a cycle. Ouroboros is often interpreted as a representation of the perpetual cyclic renewal of life and infinity, the concept of eternity and the eternal return, and represents the inherently cyclical nature of life, death and rebirth, leading to immortality, similar to the Phoenix. In Gnosticism, this serpent symbolized eternity and the soul of the world. It is said that the Ouroboros lives by feeding on its own regenerating tail and was called the invincible snake.

It is a very important religious symbol over the ages, prominent in both Greek and Egyptian iconography, and the western mystical tradition as a whole. It was also widely utilized in alchemy, where it is a purifying sigil. The myth of the Ouroboros is not dissimilar to other myths of cosmic serpents, such as the Australian Aboriginal myth of the Rainbow Serpent, Ananta Shesha and the Leviathan. The image of Ouroboros crossing itself into an infinity symbol is a modern idea, but one that retains the meaning of endlessness.

Like its fellow pre-existential entities, the Ouroboros lacks a true physical form and the form it utilizes is the form that its consciousness has chosen to manifest in. Its true form in size and scope encompasses entirety of everything, being completely incomprehensibly large. The form it usually takes is of a giant white serpent with varying features. Sometimes it'll have wings, sometimes it'll have legs; even the color of its body has been different.

The Ouroboros is hailed as one of the strongest existences in the entirety of Creation.

During the beginning of existence, the Ouroboros and Vitriol were both born from the Cosmic Egg that appeared in the endless abyss. It is the featureless chaos, the disordered primal unity that existed prior to matter and energy becoming manifest and creating universes. When it had awakened, it became lost and confused in the empty abyss where it wandered until it found one of its older siblings, Khaos, who then raised the Ouroboros as its child.

Shortly after the creation of everything, Ouroboros attempted to replicate what Life and God did, and create life by creating its own souls. The results were less than savory as it ended up creating horrifying eldritch beasts, similar to the Old Ones, known as the Levians. After witnessing them rise up and engage in a war that nearly ended the young Creation, God descended and Ouroboros effortlessly banished and sealed them in Sheol, much to the Ouroboros' accepting annoyance.

The Ouroboros often represents self-reflexivity or cyclicality, especially in the sense of something constantly re-creating itself, the eternal return, and other things perceived as cycles that begin anew as soon as they end (compare Phoenix). It can also represent the idea of primordial unity related to something existing in or persisting from the beginning with such force or qualities it cannot be extinguished.

It can represent the idea of primordial unity related to something existing in or persisting before any beginning with such force or qualities it cannot be extinguished. The Ouroboros has been important in religious and mythological symbolism, but has also been frequently used in alchemical illustrations, where it symbolizes the circular nature of the alchemist's opus. The circle is the symbol for infinity, because the circle is endless, and may be considered a polygon with an infinite number of sides.

The ouroboros has been important in religious and mythological symbolism, but has also been frequently used in alchemical illustrations, where it symbolizes the circular nature of the alchemist’s opus. It is also often associated with Gnosticism, and Hermeticism.

The name originates from within Greek language; (oura) meaning "tail" and (boros) meaning "eating", thus "he who eats the tail".

Plato described Ouroboros as a self-eating, circular being as the first living thing in the universe, an immortal, mythological constructed beast. This living being had no need of eyes when there was nothing remaining outside him to be seen; nor of ears when there was nothing to be heard; and there was no surrounding atmosphere to be breathed; nor would there have been any use of organs by the help of which he might receive his food or get rid of what he had already digested, since there was nothing which went from him or came into him: for there was nothing beside him.

Of design it was created thus, its own waste providing its own food, and all that it did or suffered taking place in and by itself. For God conceived that a being which was self-sufficient would be far more excellent than one which lacked anything; and, as it had no need to take anything or defend itself against any one, the Lord did not think it necessary to bestow upon its hands: nor had it any need of feet, nor of the whole apparatus of walking; but the movement suited to its spherical form was assigned to it, being of all the seven that which is most appropriate to mind and intelligence; and it was made to move in the same manner and on the same spot, within its own limits revolving in a circle.

All the other six motions were taken away from it, and it was made not to partake of their deviations. And as this circular movement required no feet, the universe was created without legs and without feet. 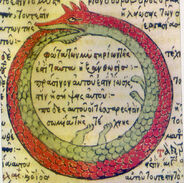 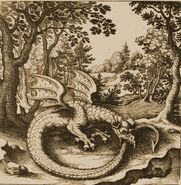 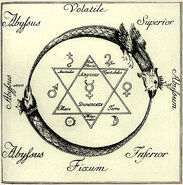 Old alchemical woodcut of the seal of Solomon with an ouroboros (Art by ???) 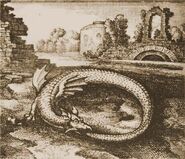 Serpent feeding on its own tail (Art by Michael Maier) 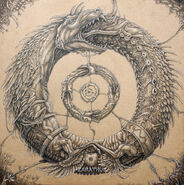