Gods and Demons Wiki
Register
Don't have an account?
Sign In
Advertisement
in: Group, Outer God, Deity,
and 4 more

The Outer Gods, also known as the Great Titans or Ogdru Jahad, are various cosmically significant entities that are featured in the Cthulhu Mythos.

Generally speaking, they are located beyond the confines of Earth and its solar system, exerting their influence from deep space. However, there are some Outer Gods who have taken up residence on Earth. They are stated to be among the most powerful beings conceived in the primordial nothingness that predated the universe, rivaling beings like the Primordials themselves.

Whilst the Arcuthas and Primordials battled them and thus knew of their existence, they were so ancient and mysterious that the likes of demons, angels, monsters, and even many deities did not believe that they existed. Both Heaven and Hell thought it to be a "myth" or "scary bedtime story", told to keep others in line. The only other angels that are aware their existence are the oldest True Archangels with Metatron and Michael being the only ones who knows where they are currently at, both who swore an oath to not breathe a word of their existence to anyone unless told to be God.

They alongside the Elder Gods and the Great Old Ones form the Old Ones, the most mysterious pantheon in existence.

As they are immortal and vastly powerful entities whose true nature defies description, with even its nature as multiple beings being ambiguous, the motivations of the Outer Gods may not be possible to represent in human terms. As such, the human and quasi-human inhabitants of the Demonic Paradise universe have expressed a variety of opinions on what the Outer Gods wants beyond freedom, which it desires above all other things.

From the varied attempts of Grigori Rasputin and Project Ragna Rok to free the Outer Gods, it is readily apparent that their release is closely tied to the fall of creation. But the question of mankind's fall varies: Herman von Klempt believing the Outer Gods would be released by the freed Ogdru Hem once man has been destroyed. A common vision all share is that the Outer Gods will do something akin to "burning the earth to a cinder" so it is possible they are all referring to some common vision of the dragon's release but are guessing at how the prophecy is fulfilled.

Beyond that, there is much dissent as to precisely what the Outer Gods will do upon release. The aliens that watch the cosmic prison of the Outer Gods apparently perceive Earth as a focal point necessary to maintaining the prison. If the Outer Gods are released, they will destroy Earth and then the entire Universe.

The True Archangels even admitted that they would rather fight the Great Old Ones again than to face the Outer Gods in combat for a second time. This implies that the Outer Gods possessed power that completely surpasses and overwhelms the Archangels, even ones as old and powerful as the likes of Michael and Lucifer. In fact the Outer Gods are powerful to the point when they can fight against Primordials and Arcuthas as an equal and the most powerful of them are even able to go against Pre-existential themselves.

Most of the Outer Gods are due to their unique nature essencially amortal and almost completely (if not fully) indestructeble as the Creator himself was able destroy only few of them, forcing Him to seal the rest of them away.

Their origins are widely unknown, possibly more so than the Great Old Ones themselves. But scholars believe that the Outer Gods are comprised of the fragments of the original primordial chaos that existed before there was anything. Before the creation of existence an ancient battle between Khaos, Azathoth, and God was believed to have taken place where Azathoth formed pieces of itself that formed into the Outer Gods and commissioned to be its main fighting force in order to battle against the forces of God. Ultimately, neither side prevailed and God put Azathoth to sleep while imprisoning its creations.

However, it soon became apparent that God was unable to truly destroy the Outer Gods. While he was successful in destroying a few, the rest proved to be immune. According to the archangel Gabriel, since the Outer Gods are in actuality the ultimate representations of the great unknown, depravity, and chaotic nothingness, they cannot be truly destroyed due to the fact that one cannot simply destroy "nothing" and something that exceeds the understanding of even the likes of a celestial being. Consequently, God had to imprison the Outer Gods in the confines of the realm known only as the "Outerverse" which is the space that exists outside of our physical universe, and is only ever accessible to God himself and whoever holds the Right Hand of Doom.

However, it was revealed by their followers that very few lesser Outer Gods have taken residence on Earth, but are currently inactive. Despite the fact that the Outer Gods are imprisoned, their influence still lingers throughout the cosmos. And that is evidenced through their "soul" and herald, Nyarlathotep and even later formed the Great Old Ones. The Outer Gods serve a cosmic function that the Great Old Ones do not and although they may be worshiped as gods by madmen and heretics, they care little for such things and are dedicated to their tasks without question. The old empire of Lemuria appeared to know about the Outer Gods, referring to them as the Ogdru Jahad, but did not worship them. 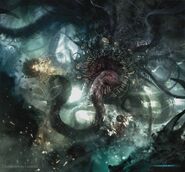 An Outer God (Art by Lordigan) 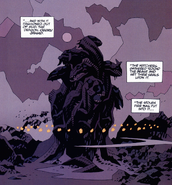 The Ogdru Jahad (Art from Hellboy)