Gods and Demons Wiki
Register
Don't have an account?
Sign In
Advertisement
in: Beings, Deity, Mythology,
and 15 more

Proserpina
Kore
Persephassa
Persephatta
Goddess of Spring
Goddess of Fertility and Vegetation
Goddess of Bountiful Harvest
Goddess of the Underworld
Queen of the Grecian Underworld
The Lady of the Underground
The Subterranean Queen
The Iron Queen of Hades
Exactor of Vengeance on the Deceased
Mistress of Judical Punishment
She who Must Not be Named
The Dread One, The Maiden
The Savior Maiden
The Mistress
Kore of Demeter Hagne

Persephone (Περσεφόνη) is the Greek goddess of spring, vegetation, fertility, and the harvest. After being kidnapped and married to Hades, she became the queen of the Grecian Underworld, which shares her husband's name - Hades.

Through her husband Hades, she mothered the gods Zagreus, Macaria, Melinoë. She was also combined with the Roman Goddess Libera who is also her sister. Libera was originally daughter of the agricultural goddess Ceres and wife to Liber, god of wine and freedom. Persephone is associated with the underworld realm and its ruler; and along with her mother Demeter, with the springtime growth of crops and the cycle of life, death and rebirth or renewal.

She is the daughter of Zeus and Demeter, making her the half-sister of Artemis, Apollo, Athena, Ares, Hephaestus, Hermes, Dionysus, Enyo, Hebe, Eileithyia, Heracles, and many more children of Zeus. Through her mother, she is the half-sister of Despoina, Arion, Plutus, Philomenus, and Iacchus.

Persephone is a beautiful fair-haired maiden dressed in regal robes, wearing intricate jewelry crafted from the finest of precious metals and jewels. Persephone is often depicted as invariably wearing robes, carrying a sheaf of grain. She may also appear as a mystical divinity with a sceptre and a little box.

Most of the arts often depicted her while being carried off by Hades.

Before his marriage to Hera, Zeus was determine to court and make Demeter his wife. After countless refusals that he all ignored, Demeter became frustrated and left Olympus. However, much to her dismay, Zeus continued to follow her no matter where she went. She then transformed into a serpent to try and hide from him but to no avail, as he knew about it and transformed himself into one as well, and spent a single night together in the form of snakes.

After the affair ended, Demeter kicked him out and forbid him from ever messing with her again, which Zeus agreed due to fear of what his sister just threatened. Months later, she gave birth to a goddess who she named Persephone. She then raised her daughter as far away from Olympus as possible, not wanting the manipulations and characteristics of the Olympian gods to affect her small child. There, on the endless field of the earth, Persephone would spend days hanging around with the nymphs and passed her days planting seeds and nurturing the flora.

When she reached marriageable age, several gods tried to woo Persephone, but Demeter, who suffered many horrible courtships, rejected all their gifts and hid her daughter away from the company of other deities. Every time a male god come near to her, Demeter would appear on her dragon chariot, bradishing her gleaming golden sword on her hand and scared all the suitors away.

The Abduction of Persephone

Persephone's uncle, Hades, was very lonely and wanted a wife. One day, he spotted her in the fields and became entranced by her beauty. He asked help to Zeus, despite his estrangement with his brother. One day, Persephone was picking flowers with some of her nymphs in a field in Enna when Hades came out from the volcano Etna with four black horses named Orphnaeus, Aethon, Nycteus and Alastor to abduct her, bursting through a cleft in the earth. Life came to a standstill as the devastated Demeter searched everywhere for her lost daughter. Hecate, goddess of magic, told Demeter she had sensed a powerful god used magic to cleave the earth and covered his track when kidnapping her. Angered and heartbroken, Demeter stopped caring for the Earth, so the land didn't flourish and people began to starve and die.

Hades was determined to make Persephone love him and gave her many gifts and riches. She hated him for snatching her away from her mother until he asked the dead gardeners of the Underworld to make a field of her favourite plants. Pressed by the cries of the hungry people and by the other deities who heard their anguish, Zeus finally forced Hades to return Persephone to her mother. However, it was a rule of the Fates that whoever consumed food or drink in the Underworld was doomed to spend eternity there. Before Persephone was released to Hermes, who had been sent to retrieve her, a servant of Hades tricked Persephone into eating six pomegranate seeds.

In order to calm both Demeter and Hades, Zeus ordered Persephone to return to the Underworld for six months each year. When Demeter and Persephone are together, the Earth flourishes with vegetation in Demeter's happiness. When Persephone is with her husband in the Underworld, the Earth once again becomes barren as Demeter is too depressed to work properly. That is how the seasons came to be.

There are many variations on the myth about what happened, but most have Hades kidnapping her and taking her to the underworld. Persephone's mother refused any deity that wanted to be with Persephone and kept them away from her, and it was said that Zeus gave her to his brother Hades.

In another version of the story, Persephone ate only four pomegranate seeds, and she did so of her own accord. When Zeus ordered her return, Hades struck a deal with Zeus, saying that since she had stolen his pomegranate seeds, she must stay with him four months of the year in return. For this reason, in spring when Demeter receives her daughter back, the crops blossom, and in summer they flourish.

In 204 BC, a new "Greek-style" cult to Demeter and Persephone as "Mother and Maiden" was imported from southern Italy, along with Greek priestesses to serve it, and was installed in Libera and Ceres' temple on Rome's Aventine Hill. The new cult and its priesthood were actively promoted by Rome's religious authorities as morally desirable for respectable Roman women, and may have partly subsumed the temple's older, native cult to Demeter, Liber and Libera; but the new rites seem to have functioned alongside the old, rather than replaced them.

Proserpina's figure inspired many artistic compositions, eminently in sculpture and in literature. For reasons that may be obvious, a variety of pomegranate is called Proserpina.

Queen of the Underworld (Art by Tira-Owl)

Hades and Persephone (Art by AlexandraVBach) 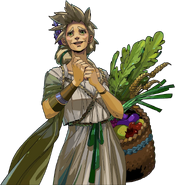 Persephone as a old Woman (Art from Hades)