Phenex is the 37th demonic spirit of the Ars Goetia summoned by King Solomon and a Great Marquis of Hell.

He teaches all wonderful sciences, is an excellent poet, and is very obedient to the conjurer. He is said to converse in rhymes. Phenex hopes to return to Heaven after 1,200 years, but he is deceived in this hope. He formerly was in the angelic order of thrones.

He is depicted as a phoenix, which sings sweet notes with the voice of a child, but the conjurer must warn his companions (for he has not to be alone) not to hear them and ask him to take a human shape, which the demon supposedly does after a certain amount of time and fulfills all commands well.

He mainly appears as a phoenix bird, that sings sweetly in a child's voice, though can also take a human form.

Phenex is very obedient to the conjurer and will fulfills all commands well. Phenex has the futile hope that he will return to the seventh throne in 1,200 years.

Aside from the standard abilities displayed by the Ars Goetia, Phenex is a demon governing death and rebirth, seen in a similar fashion to the Phoenix. As such, it is capable of reviving by itself after being killed. Phenex is also capable of assuming a humanoid form.

Phenex's best ability is the use of fire and anything related to pyrokinesis. He has the ability make fire bend to his will, whether it be stove fire, bonfire, whatever is related to the use of fire itself he can use it. He can even heat water just by using his hands. He can also use this in his human form. He can turn into a Phoenix himself and give out an ear-piercing screech or even use sound itself against his opponents. With his demonic self, he can easily absorb martial arts teachings and abilities

He can teach all of the wonderful sciences, is an excellent user of poetry, and possess a siren’s voice, and so the magician must take precautions not to be seduced by it. Phenex can fly whether as a Phoenix or not. 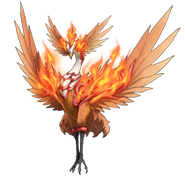 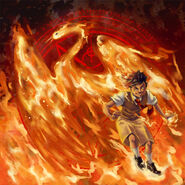