Gods and Demons Wiki
Register
Don't have an account?
Sign In
Advertisement
in: Races, Monster, Mythology,
and 4 more

Created by Hestia through Ziz's feathers

A Phoenix is a mythical long-lived bird that cyclically regenerates or is otherwise born again.

They are said to resurrect whenever it reaches the end of its life to begin anew, making it a true immortal. Associated with the sun, a Phoenix is known to have a tail of beautiful gold and red plumage. It has a 500 to 1,000 year life-cycle, near the end of which it builds itself a nest of twigs that it then ignites; both nest and bird burn fiercely and are reduced to ashes, from which a new, young phoenix or phoenix egg arises, reborn anew to live again.

Some legends say it dies in a show of flames and combustion, others that it simply dies and decomposes before being born again.

The new phoenix is destined to live as long as its old self. In some stories, the new phoenix embalms the ashes of its old self in an egg made of myrrh and deposits it in the Egyptian city of Heliopolis. In time, the motif and concept of the phoenix extended from its origins in ancient Greek folklore. For example, the classical motif of the phoenix continues into the Gnostic manuscript On the Origin of the World from the Nag Hammadi Library collection in Egypt generally dated to the 4th century.

Myrrh from a phoenix was highly valuable for the ancient Egyptians as it was used for the embalming of mummies. The phoenix's myrrh was also listed as an ingredient in the holy anointing oil used to anoint the Tabernacle, high priests and kings.

The phoenix is sometimes pictured in ancient and medieval literature and medieval art as endowed with a halo, which emphasizes the bird's connection with the Sun. In the oldest images of phoenixes on record these nimbuses often have seven rays, like Helios (the Greek personification of the Sun). Pliny the Elder also describes the bird as having a crest of feathers on its head, and Ezekiel the Dramatist compared it to a rooster.

The phoenix came to be associated with specific colors over time. Although the phoenix was generally believed to be colorful and vibrant, sources provide no clear consensus about its coloration. Tacitus says that its color made it stand out from all other birds. Some said that the bird had peacock-like coloring, and Herodotus's claim of the Phoenix being red and yellow is popular in many versions of the story on record. Ezekiel the Tragedian declared that the phoenix had red legs and striking yellow eyes, but Lactantius said that its eyes were blue like sapphires and that its legs were covered in yellow-gold scales with rose-colored talons.

Some describe the phoenix as similar in size to an eagle, but other claim that the phoenix was larger, with Lactantius declaring that it was even larger than an ostrich.

Even at their weakest, Phoenixes are understandably powerful creatures with much control of the fires and winds on Earth. While a divine monster, it is not impossible to tame one but that in of itself is still an extremely taxing task. Hestia explains that a phoenix could only be tamed by those with a passion equal to its fire. The bird was also said to regenerate when hurt or wounded by a foe, thus being almost immortal and invincible, it is also said that it can heal a person with a tear from its eyes and make them temporarily immune to death. The phoenix is a symbol of fire, divinity, resurrection and rebirth out of the ashes or chaos.

At their greatest, phoenixes are immensely powerful creatures who can sweep entire cities to complete oblivion. Thankfully, phoenixes are usually benign rather than outright malignant as should it pose itself as a threat it would be nigh-impossible to destroy one. At best a phoenix only attacks when threatened and aids others should the opportunity be necessary.

Due to their powers, many believe that phoenixes are extension of the Ziz, the primordial beast of the skies.

One special phoenix was revealed to be a creation of Hestia using an extension of the mighty Ziz. Hestia was amazed by the majesty of the Ziz and opted to create a creature similar to the Ziz. She took a feather from the Ziz, placed it within the divine hearth of Olympus, before cooling with a vial containing contents of Ambrosia. Upon contact, a large spark erupted from the bowl, and from the ashes Hestia's phoenix rose as a chick.

This phoenix lived within Olympus for sometime before Hestia allowed it to roam free, inspiring many legends of the legendary creature from famous poets without knowing that it was, in some sense, a child of Hestia and by extension Hestia. It is also shown that the phoenix's image was engraved upon the murals depicting the Fountain of Youth implying a connection of sort.

The origin of the phoenix has been attributed to Ancient Egypt by Herodotus and later 19th-century scholars, but other scholars think the Egyptian texts may have been influenced by classical folklore. Over time the phoenix motif spread and gained a variety of new associations who have contributed to the retelling and transmission of the phoenix motif. Over time, extending beyond its origins, the phoenix could variously symbolize renewal in general as well as the sun, time, the Empire, metempsychosis, consecration, resurrection, life in the heavenly Paradise, Christ, Mary, virginity, the exceptional man, and certain aspects of Christian life. Some scholars have claimed that the poem De ave phoenice may present the mythological phoenix motif as a symbol of Christ's resurrection.

Exterior to the Linear B from Mycenaean Greece, the earliest clear mention of the phoenix in ancient Greek literature occurs in a fragment of the Precepts of Chiron, attributed to 6th century BC Greek poet Hesiod. In the fragment, the wise centaur Chiron tells a young hero Achilles the following, describing the phoenix's lifetime as 972 times the length of a long-lived human.

In the 19th century, scholastic suspicions appeared to be confirmed by the discovery that Egyptians in Heliopolis had venerated the Bennu, a solar bird similar in some respects to the Greek phoenix. However, the Egyptian sources regarding the bennu are often problematic and open to a variety of interpretations. Some of these sources may have actually been influenced by Greek notions of the phoenix, rather than the other way around.

In the modern era, the phoenix motif continues to see use in a variety of contexts. Elon University's sports teams became known as the Phoenix in 2000, stemming from the colleges fire and subsequent recovery in 1923. University trustees at the time announced their intentions to make Elon "rise from the ashes".

The flag of San Francisco features a phoenix in its center, symbolic of the city's rebuilding following the 1906 San Francisco earthquake.

The club crest of Coventry City Football Club features a phoenix rising from the flames, in recognition of how the City of Coventry was rebuilt after being destroyed by the Nazi German Luftwaffe during the Blitz bombing campaigns of World War II.

Coventry University use a phoenix rising from the flames as their emblem, tying in with the city they are based, and the same reason Coventry City Football Club carry a phoenix on their club crest.

The Latin word comes from Greek φοῖνιξ phoinīx. The Greek word is first attested in the Mycenaean Greek po-ni-ke, which probably meant 'griffin', though it might have meant 'palm tree'. That word is probably a borrowing from a West Semitic word for madder, a red dye made from Rubia tinctorum. The word Phoenician appears to be from the same root, meaning 'those who work with red dyes'. So phoenix may mean 'the Phoenician bird' or 'the purplish-red bird'.

Other birds related to the Phoenix 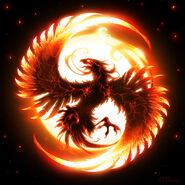 An eagle transforming into a Phoenix (Art by Kavabangist) 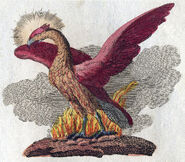 A depiction of a phoenix (Art by Friedrich Justin Bertuch)

5th-century mosaic of a nimbate phoenix (Art from Louvre) 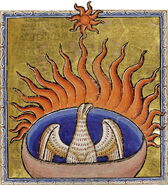