Poseidon was one of the twelve Olympian deities of the pantheon in Greek mythology.

His main domain was the ocean, and he is called the "God of the Sea". Additionally, he is referred to as "Earth-Shaker" and "Storm-Bringer" due to his role in causing earthquakes and storms, and has been called the "Father of horses" as he created them from sea foam. He is usually depicted as an older male with curly hair and beard.

Like Zeus, Poseidon has had numerous affairs and thus many children but unlike his brother's vengeful wife Hera, his own wife did not press the matter. His weapon was a trident, with which he could make the earth shake, causing earthquakes, and shatter any object.

Poseidon resented Zeus' claim to the heavens and as the second oldest brother wanted his father's former domain for himself and resented the hand-out even more, various myths and poems recount Poseidon’s feuds with Zeus and clashes for power, and because of this he was considered by Greeks to have a difficult quarrelsome personality. Combined with his greed, he had a series of disputes with other gods during his various attempts to take over the cities they were patrons of.

Poseidon is married to the sea goddess Amphitrite and together they had a son named Triton. He also had a child with Aphrodite, a daughter named Rhodos. Other notable children of him were the hero Theseus, the hunter Orion and the cyclop Polyphemus.

Poeidon was also viewed by Hellenists as a particularly lascivious character, entertaining innumerable conquests of goddesses, nymphs and mortal women. Even when his attempts were not successful, Poseidon was not hesitant to take the female he was pursuing by force.

Poseidon was a son of Rhea, the earth mother, and Cronus, the prevailing sky god who ruled over the rest of the Greek pantheon. Fearing that his children would one day usurp him, Poseidon was swallowed by his father immediately after his birth, as were the rest of his brothers and sisters. He was eventually saved by his mother, who tricked Cronus by offering him a large stone wrapped in swaddling clothes in place of her sixth child, Zeus.

Cronus was forced to vomit up Poseidon and the rest of his siblings in the process of ridding the stone from his digestive system. In alternative versions, Poseidon was thrown into the sea by his father as soon as he was born. Either way, Poseidon went on to play a key role in assisting Zeus in usurping Cronus and the rest of the Titans. After Cronus' defeat, the three brothers Zeus, Hades and Poseidon divided up the universe among themselves, assuming jurisdiction over the sky, the underworld and the sea, respectively.

After the Titanomachy, the three deities worked in reshaping the world. First Zeus set out to divvy up the world between his brothers, Earth was set to be neutral ground and Zeus choose the heavens as his realm so he gave the remaining Oceans to Poseidon and Underworld to Hades.

At one point he desired Demeter. To deter him, Demeter asked him to make the most beautiful animal that the world had ever seen. So, in an effort to impress her, Poseidon created the first horse. In some accounts, his first attempts were unsuccessful and created a variety of other animals in his quest; thus, by the time the horse was created, his passion for Demeter had diminished.

As the god Neptune, he was originally considered as the circular body of water around the Roman lands, but was later merged with the Greek deity Poseidon. This hellenised Neptune was usually considered the brother of Jupiter and Pluto, and was married to the sea goddess Salacia.

The eighth and farthest known planet from the Sun in the Solar System was named after them.

(Art from God of War) 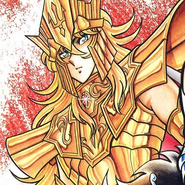