Gods and Demons Wiki
Register
Don't have an account?
Sign In
Advertisement
in: Races, Pre-existential, Primordial,
and 2 more

The Creators, The Old Gods, Primordials, The Forgers of the World, Dimensionless Entities, The Supreme Beings, Supreme Archetypes

The Pre-existential Entities are the oldest entities in existence, having been born before the beginning of Creation and took part in the creation of the world. There are many Pre-existential Entities but most of them have yet to be revealed. They are the prototypes of concepts that don't even exist yet, such as matter, antimatter, darkness, madness, chaos, oblivion or infinity, and many others.

Pre-existential Entities are entities that supposedly come from nothing, whether they are self created or come from the Cosmic Egg, an object which existed outside of the multiverse, existing beyond the concept of dimensions themselves varies. They are unbound by space and time, transcendent of life and death, and existing beyond the concept of duality of good, evil, light, dark, existence, and nonexistence. They are archetypes and abstractions of concepts that pervade within the dimensional framework of all Creation as well as existing outside of it within.

Pre-existential Entities are powerful beyond all imagination. No matter how many qualitative steps one takes, one can never possibly reach their level of existence even if they spend an eternity trying to. They possess powers beyond the Gods of the Earth, making them seem like children playing in the mud. They can alter and destroy matter at a quantic scale, manipulate their given concepts and laws which govern all of reality and beyond, as well as reform even if they suffer absolute conceptual death. In addition, Pre-existential Entities are capable of birthing entire universes as well as erasing them effortlessly.

Although all Pre-Existentials initially appear to be separate divinities, it is clear that in some senses, everything and everyone is connected in some way, with one being an aspect of the other. For example, Ayin is the evil aspect of God, representing everything that God Is Not and Does Not Represent; while God is the benign and positive aspect of Ayin, representing all the positive and kind concepts that She does not possess. This is reflected in all Pre-Existentials down to all things and non-things in Creation, down to the smallest and most insignificant atom. This is due to the fact that Pre-Existentials are not real entities, but archetypes. Because of this, they are forces, concepts that complement each other, with all existing as aspects of each other, and as a result, this ends up reflected in their creations (such as Pralaya being an aspect of Barbelo and Nyx being an aspect of the Mother Night).

What existed before the creation of the universe is and perhaps always will be a mystery to humanity, everything we know is recorded in research done by humans and angels about this period so distant and unknown. Despite this, everything seems uncertain, mysterious and curious. The Seraphim and Malakh work with a theory about the origin of everything.

In the beginning there was nothing, no earth, no matter, no wind, no life, no death, no time, no light, no heaven or hell, the universe was without form, and void. But within a moment, this nothingness was replaced with Ayin who was made of an ultrahot material. Afterwards, this material was cooled down with Khaos, which then gave way to the Darkness. Eventually, the universe grew tired of being nothing, and so the universe said the Word, and the Word was with God, also known as Yesh, and the Word was God. Yesh and Ayin were the yes and the no of everything. The acceptance and denial all rolled into one being, essentially being the transcendent root of roots as the origins of all that has existed, exists, and will exist.

When God saw His reflection in the Primordial Waters, His reflection took shape and personified in an entity that was Barbelo, the feminine side of God. When she was formed, with the coming of motherhood, so was Life, and when life was formed, Death formed shortly afterwards. When the first second clicked, Time also formed. When a hint of conflict and madness formed, so did the blind idiocy of Azathoth. And finally to maintain order, the universe required endlessness and oblivion, and so from a Cosmic Egg came the Ouroboros and Vitriol.

These beings, the Pre-existentials, were the most powerful beings within the multiverse, there are possibly others but most are not known for now. This is what sparked a war between these beings, God created the Arcuthas, Khaos created the Primordials, Azathoth created the Outer Gods, and Ayin and the Darkness, teamed up, both with the purpose of fighting the others, however Death, Life, and Father Time watched the fight, Barbelo wanted nothing to do with the fight, Ouroboros was lost for the entire fight, and Vitriol was busy look for something to eat.

Eventually, whether it was through combat or comradery, God came out on top, winning the war. The other beings were either trapped or now work under God not as an enemy but as a respected peer.

Pre-existentials who aren't considered part of the "main group" as while they share many characteristics with Pre-Existentials, there's enough evidence pointing to them just being incredibly old entities.

Entities who were once considered Pre-existential, but now have enough evidence against the idea. 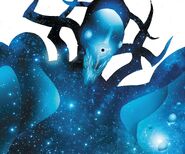