Gods and Demons Wiki
Register
Don't have an account?
Sign In
Advertisement
in: Races, Primordial, Mythology,
and 2 more

The Primordials are the ancient cosmic entities that personify the abstract concepts which were emerged at Creation.

They are among the most powerful beings in all of Creation, rivaling the Arcuthas, Outer Gods, and even the Endless, while surpassing all True Archangels in power and strength, and are credited as the ancestors of all Gods. Although relatively weaker when compared to God, Khaos, Azathoth and the other such entities, these beings are still regarded across the cosmos as the next most powerful beings in all of creation.

It is generally believed that the Primordials represent the "light" of creation while their counterparts the Outer Gods represent the dark. They all embodiment concepts which includes earth, air, sea, sky, water, underworld, darkness, night, light, day, procreation and time. The Primordials were used as tools of power during the war against Azathoth and God. The Primordials also had children known as the Second-Generation Primordials.

As the first born of the immortals, who formed the very fabric of the universe, they were primarily known in Greek mythology as the Protogenoi (protos meaning "first," and genos "born"). They were, for the most part, purely elemental beings; example such as Ouranos being the Sky and Gaia being the Earth. A few of them were occasionally described or portrayed in anthropomorphic form, however these forms were inevitably inseparable from their native element.

Even though the main primordials are Greek, not all Primordials came from them. Most Primordials did come from Khaos or one of their avatars like Amatsu-Mikaboshi, but some of them did came from God, such as Brahman. The Primordials main duty is to maintain Creation under the watchful eye of their progenitor Khaos and God himself

Such beings are devoid of physical or spiritual appearance, they are more than beings or deities, they are concepts, living forces, the Primordials are words, names, ideas, etc., being beyond existing or not existing, being or not being. They transcend all that exists in the known universe & multiverse, being devoid of shape, size or depth.

But, they can take forms on the physical or spiritual plane, God for example is sometimes perceived as an incredibly bright light that expands through the various levels of creation, but he can also appear as an elderly man, a beautiful woman or a little boy. The entities of the Void, such as Khaos, Ayin and The Darkness, usually appear with Gothic forms or vast darkness. Lesser primordials can also appear with human forms, such as Nyx, Erebus, Amenominakanushi, and so on.

It is difficult to describe the personality of a Primordial, as they are beings that are beyond all things, beyond imagination and beyond the unimaginable, they are beings with knowledge and wisdom far beyond any human, demon or angel, with several parts of creation existing within them. Then, just as a bacterium could not understand the thoughts of a human being, a human cannot understand the thoughts of a Primordial, however foolish it may be. It would not be absurd to think that they are impersonal beings, existing only as forces in the Universe. Although collectively described as "blind" and "mindless", this is only because of the limited perspective of lower entities, as they are actually utterly beyond all understanding, human or otherwise, and operate at much higher levels that make most of them as completely impersonal entities.

Primordials are among the most powerful entities in all of Creation, most possessing at least nigh-omnipotence, nigh-omniscience and nigh-omnipresence, coming short of only to the pre-existentials and rivalling the Arcuthas and Outer Gods. They are able to create, reshape and destroy practically entire realms, dimensions and even timelines with some affecting the entire multiverse. They are completely unbound from the laws of reality and also specialize in abilities unique to their domains where they are at their strongest.

They don't only rule over their own domains but are also the embodiments of their domains, like Erebus literally being the primordial darkness itself.

The Primordials were said to have been fashioned by Khaos who had given them life through the resulting implosion. It is said that Khaos cupped his hands within the waters of chaps before breathing life into the puddle. Khaos then dipped its fingers into the content and flicked them forward creating the Primordials. They were created to serve Khaos against the Old Ones of Azathoth and then God at latter.

After the defeat and imprisonment of Azathoth and surrender from Khaos, God then turned His attention to these primeval beings. His new creations, the angels, at first opted to destroy them in fear that they might turn against them just as the Outer Gods did, but God refused for He noticed that despite being born out of the Khaos that molded with life, they were rather benevolent, and thus spared them.

Seeing that they embody the components of creation itself, God assigned them with becoming these very components once the universe and all its concepts were done in order for the "natural wheel" to spin in a stabilized manner. The Primordials agreed and carried on with this task. Once complete, they laid dormant in their natural state for many centuries and in the process gave birth to other primeval deities. To this day they remain inactive and take no part whatsoever in the events that transpire concerning the mortal realms, for they are one with the forces and concepts they embody.

When the universe and all that it is was properly formed, God and Khaos rested and left its maintenance in the hands of the Primordials. However, as time went on, some of the Primordials established a hierarchy of sorts over the cosmos which then led to the conception of the gods that humans have come to know in ancient mythology while other Primordials were simply concerned with the tasks given to them. Once complete, they laid dormant in their natural state for many centuries and in the process gave birth to other primeval deities.

However, when the gods of old were born by the Primordials or the Second-Generation Primordials, many of them warred against their mighty parents and relatives for the right to claim lordship over the Earth and the universe whilst others relinquished their status to their children. Their children emerged victorious and established themselves as the new rulers of the cosmos in place of their parents and ancestors. To this day, some of the Primordials that did not partake in these conflicts remain inactive and take no part whatsoever in the events that transpire concerning the mortal realms, for they are one with the forces and concepts they embody.

The Kotoamatsukami (which literally means distinguishing heavenly kami) are the collective name for the first Shinto gods which came into existence at the time of the creation of the universe. They were born in Takamagahara, the Shinto Skyland at the time of the creation. Unlike the later gods, these deities were born without any procreation only created by Khaos' avatar Amatsu-Mikaboshi. The next generation of gods that followed was the Kamiyonanayo where afterwards, the Kotoamatsukami "hides away" as Hitorigami. Though the Zōkasanshin (three deity of Creation) are thought to be genderless, another theory stated Kami-musuhi was the woman and Takami-musubi the man, comparing them with water and fire or with yin and yang.

The Ogdoad were eight Egyptian primordial deities worshiped in Hermopolis. References to the Ogdoad date to the Old Kingdom of Egypt, and even at the time of composition of the Pyramid Texts towards the end of the Old Kingdom, they appear to have been antiquated and mostly forgotten by everyone except religious experts. They are frequently mentioned in the Coffin Texts of the Middle Kingdom. They are described as having the heads of frogs (male) and serpents (female), and they are often depicted in this way in reliefs of the Ptolemaic Kingdom 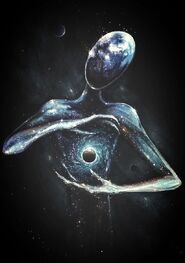 A Primordial creating a new universe (Art by ???) 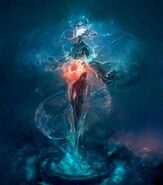