Gods and Demons Wiki
Register
Don't have an account?
Sign In
Advertisement
in: Beings, Deity, Sky Deity,
and 13 more

Quetzalcoatl is one of the most important gods in ancient Aztec Mesoamerica. This Deity is a Dragon King that rules over the sky in Aztec mythology and is the creator of the fifth humanity.

He was considered the patron god of priests and merchants and considered the god of learning, science, agriculture, crafts and the arts. He also invented the calendar, was identified with Venus, the rising morning star, he was associated with opossums and even discovered corn with the help of giant red ant that led him to a mountain packed full of grain and seeds. He was regarded as the god of winds and rain and as the creator of the world and mankind. He is apart of the Four Tezcatlipocas.

He appears as a mix of bird and rattle snake and his name is a combination of the Nahuatl words for the quetzal, the emerald plumed bird, and coatl or serpent.

In his Human Leader form, he has green skin and glamorous Aztec armor. As the morning star, Quetzalcoatl appears as a giant divine harpy eagle.

Quetzalcoatl was the son of the primordial androgynous god Ōmeteōtl and was the brother of Tezcatlipoca, Huītzilōpōchtli and Xipe Totec. He is the 9th of the 13 Lords of the Day and is often associated with the rain god Tlāloc.

After waiting for 600 years Ōmeteōtl instructed Quetzalcoatl to create the world. Quetzalcoatl and Tezcatlipoca repeatedly fought each other and as a consequence the four ages are created and destroyed with each successive battle between the two gods.

The pair of gods had created the earth and the sky when they transformed themselves into huge snakes and ripped in two the female reptilian monster known as Cipactli, one part becoming the earth and the other the sky. Trees, plants and flowers sprang from the dead creature’s hair and skin whilst springs and caves were made from her eyes and nose and the valleys and mountains came from her mouth.

It is said Quetzalcoatl was coerced by Tezcatlipoca into becoming drunk on pulque, cavorting with his older sister, Quetzalpetlatl, a celibate priestess, and neglecting their religious duties. The next morning, Quetzalcoatl, feeling shame and regret, had his servants build him a stone chest, adorn him in turquoise, and then, laying in the chest, set himself on fire. His ashes rose into the sky and then his heart followed, becoming the morning star.

After all Apocalypses had happened, as the morning star he would be the being to talk to Lucifer while he is in the Lake of Fire, telling him to spend more time with his son, Akiel, and turning him over to the side of good for The Final Conflict. 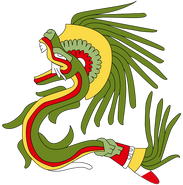