Gods and Demons Wiki
Register
Don't have an account?
Sign In
Advertisement
in: Beings, Angel, Angel of Death,
and 9 more

Rahab is a mythical sea-monster that was once one of the Watchers and was known as the demonic angel of the deep seas and keeper of faith.

In the Talmud, Rahab was the angel of insolence and pride, responsible for shaking the waters and producing big waves; he is also responsible for the roaring of the sea.

Once an angel of death, Rahab was a keeper of the faith who protected seafaring costal peoples and kept order amongst the deep dwelling civilizations of the se until he was banished from Heaven chained into the depths of the deep sea. =After becoming a Fallen Angel and then a particular demon, inhabitant of the sea, especially associated with the Red Sea who is able to generate water and snow.

Rahab ferried the bodies of the dead into the sea. His promise to mankind was to bring them to a place where they would never be disturbed. They prayed that the abyss would give the dead peace. No one could know for sure except the grim Watcher. That dark place was his home and his alone. The passage into darkness was a place of no return. That is its nature.

No one truly knows the reason behind Rahab's rebellion, only that when the angel fell, it was plunged deep into the Red Sea. There the angel was restrained by the Leviathan herself, the greatest of the sea life. As Rahab struggled to break free, the Leviathan tightened herself around the angel before creating chains around Rahab. As a result, the angel was banished from the celestial plane and confined to the oceans of the world, unable to ever break through the waters surface to ask for forgiveness for whatever transgression committed.

Rahab later became an angel of insolence and pride, refusing to repent before being freed from its aquatic prison. It is said that the struggling of Rahab against its chains shakes the world's oceans and produces tumultuous waves; it is also responsible for the roaring of the sea. It is now rumored that Rahab ferries the bodies of the dead into the sea. His new promise to mankind is to bring them to depths where they will never be disturbed again. This passage into darkness takes souls to a place of no return, the home of the deep dwelling angel.

In medieval Jewish folklore, Rahab (noise, tumult, arrogance) is a mythical sea monster, a dragon of the waters, the "demonic angel of the sea". Rahab represents the primordial abyss, the water-dragon of darkness and chaos, comparable to Leviathan, the Leviathan, and Tiamat. 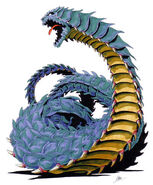