Raphiel, Raph, Saint Raphael, Archangel of Healing, Angel of Death, Angel of Trumpet, God Heals, One that heals, First Doctor, The Cheapskate Angel, "God is my healer", The Healer of God, Raph-Raph (By Gabriel)

Raphael is one of the Seven Archangels, the highest ranking angels in all of Heaven itself.

Saint Raphael is the accounted patron of travelers, happy meetings, lovers, nurses, physicians, medical workers, matchmakers, Christian marriage, and Catholic studies. He is said to be the guardian of the Tree of Life, opposite the Tree of Knowledge in the Garden of Eden. He also expounds to Adam the War in Heaven in which Lucifer and the demons fell, and the creation of the Earth.

Most of Raphael's exploits take place in the Apocrypha, where he has roles as warden of Azazel, an angel that got exiled from Heaven for having sex with human females, and guide of Sheol, the Hebrew Underworld. Not all branches of these religions consider the identification of Raphael to be canonical.

Currently, Raphael is the guardian angel of the Third Heaven, Heavenly Eden, where the souls of good human beings go after death to rest and where the body of the Son of God rests awaiting the Day of Judgment.

Raphael, like the other angels and archangels, has an indescribable form for human beings, with a powerful light like the sun and a voice as high as 190 decibels, capable of exploding the eardrums. Raphael sometimes appears with a silhouette made of light and spiritual energy, similar to one of the forms of God.

Raphael's mortal appearance is that of a teenager with a fair complexion, greasy blonde hair and blue and gold eyes. The outfits that Raphael wears vary from day to day, shifts regularly but keeps some similarities, such as a short sleeved t-shirt and short pants. He is always seen wearing sneakers in this form. Raphael can summon in his body about 12 white wings with shades of green at the tips that shine as brightly as the sun itself, if not brighter, which he can retract at will when on Earth when requested by God Himself.

In his female form, Raphael is a beautiful woman with silver hair that hangs to her hips, her eyes are amber-yellow and the skin on her body is described as "porcelain". She has a well-endowed figure and is usually shown wearing a long white robe that covers much of her body, although it exposes part of her breasts. When on a beach, she appears wearing a lime green bikini. Its three measurements are [B89-W59-H86 cm] and its height is 1.60 cm, having the same height as Gabriel.

In his angel form, he is an extraordinarily gigantic humanoid being, having a size close to that of Mount Everest. He has albino skin and rigid muscles that are more resistant than graphene, he has a skirt that covers his waist and has six wings on his body: with two he covers his face, with two he covers his feet and with two he flies. In this form he is able to lift his sword in all its glory and power, the "Redeemer".

Raphael can be described as serene and apathetic towards others. While aggressive in battle, he is calm when not but has a fierce gaze constantly. He generally acts indifferent, bordering on arrogance, to most situations he is faced with, and rarely views his opponent as worth his time. He is even easily offended if he is not treated with respect. However, he has a great sense of duty and honor, and rarely shows signs of panic or distress.

The only time when Raphael loses his cool is when faced with Lucifer. He deeply despises most demons, and hates his brother for the torment he put him and his family through during and after the war. He becomes visibly enraged at the mere words that Lucifer spits and will immediately attack without a second thought.

Known for being one of the purest among the archangels, Raphael was a symbol of peace and harmony, refusing aggression and violence. Like many angels and saints, Raphael does not retaliate against attacks aimed at him, as when he didn't even try to stop Abaddon's blow. Furthermore, he believed that nothing existed permanently and that each moment should be lived intensely.

His relationship with Asmodeus

Even though he hates almost ever demon, he doesn't hate Asmodeus. Raphael and Asmodeus (formerly known as Asmodel) was originally commander and general being that Asmodel was the general of Raphael's Garrison and serve very loyally.

When the demiurge, Yaldabaoth attacks Heaven, the angel fought back with Asmodeus being a big part in distracting the beast long enough to allow God to finally sent him back to the dead zone of the Universe. Asmodeus, while succeeding in his mission, was in a heavily harmed state and would have died if Raphael didn't save him. When he did, Asmodeus fell in love with Raphael with the latter giving back those feelings.

However, it did not last forever as Asmodeus's love was becoming more sexual. With this, Raphael broke up with him saying that it's not working out but instead it went even worst than before, he joined Lucifer (then as Helel)'s rebellion to dethrone God so Asmodeus can have Raphael for himself. This failed and Asmodeus fell from grace in Hell becoming the demon lord of Lust.

Even though he is a gifted healer, Raphael is a powerful warrior, nearly equaling Lucifer and Michael in terms of brute strength and power. While being a mighty warrior, Raphael is highly proficient in conventional healing techniques and herbal healing. His knowledge of anatomy is great enough that upon examination of Lucifer's "dead body", he concluded it was not Lucifer or even real.

When Raphael heals a condition, often the cure manifests instantly. When being healed, people feel a gentle buzzing energy as Raphael is healing them; or they see green lights. But for others, Raphael’s healing is very subtle. Raphael can help one reduce or eliminate pain stemming from short-term and chronic conditions. However this is only a result of one asking for his help. In this way, they signal their permission for him to intervene.

Raphael first appears disguised in human form as the travelling companion of Tobit's son Tobiah, calling himself "Azarias the son of the great Ananias". During the adventurous course of the journey the archangel's protective influence is shown in many ways including the binding of the demon in the desert of upper Egypt. After the return and the healing of the blindness of Tobit, Azarias makes himself known as "the angel Raphael, one of the seven, who stand before the Lord".

Regarding the healing powers attributed to Raphael, He has a declaration to Tobit as he was sent by the Lord to heal him of his blindness and to deliver Sarah, his daughter-in-law, from the demon of lust and his former lover, Asmodeus, who abducts and kills every man she marries on their wedding night before the marriage can be consummated.

He is also one of the three angels who visited the patriarch Abraham and his wife, Sarah, to help with their conception; as well as the angel who healed Abraham’s grandson Jacob’s wrestling injuries and who gave King Solomon his magical ring.

In Christianity, Raphael is generally associated with an unnamed angel mentioned in the Gospel of John, who stirs the water at the healing pool of Bethesda. Raphael is recognized as an angel in the doctrine of The Church of Jesus Christ of Latter-Day Saints, as he is briefly mentioned in the Doctrine and Covenants. Raphael is mentioned in the Book of Tobit, which is accepted as canonical by Catholics, Eastern Orthodox, Oriental Orthodox and some Anglicans.

Although Raphael is not named in the Bible, theologians believe he was the archangel who healed the infirm at the Bethesda pond described in the Gospels.

Raphael is supposedly the angel responsible for signaling the coming of Judgment Day by blowing the trumpet (namely Sûr) and sending out a "Blast of Truth", although it is actually Israfil. According to tradition, the trumpet will be blown two times. The first blow of the trumpet will signal the beginning of Last Day and the second blow will signal the time when all the souls will be gathered for the Last Judgement. 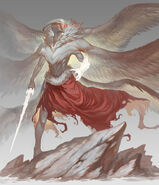