Gods and Demons Wiki
Register
Don't have an account?
Sign In
Advertisement
in: Beings, Angel, Heaven,
and 5 more

Secrets of God, Keeper of Secrets, Angel of Mysteries

Raziel is an Archangel, or Ophanim, who is the "Keeper of Secrets" and the "Angel of Mysteries".

He is addressed as the Secrets of God. The book he carries, known as the Book of Raziel, along with teachings that were attributed to this figure is said to contain all secret knowledge, and is considered to be a book of magic. He stands close by God's throne, and therefore hears and writes down everything that is said and discussed which makes him privy to all of God’s secrets. He also stands at the foot of the Tree of Life and notes all of creation, diligently recording its observations into a great tome.

He is associated with the Sephirah Chokhmah in Olam Briah, one of the Four Worlds of Kabbalistic theory. Various teachings assign Raziel to diverse roles, including that of a Cherub, a member of the Ophanim and chief of the Er'elim. Raziel is also the patron angel of the Shadowhunters, a society of artificial Nephilim that he created to hunt demons.

Raziel often appears as an indigo ray, which may shimmer with all of the colors of the rainbow.

In battle, he mainly prioritizes light and holy magic which pierces most dark and demonic beings.

It is believed that he purportedly gave the book to Adam and Eve after they ate from the forbidden Tree of Knowledge (for which resulted in their expulsion from the Garden of Eden) so the two could find their way back "home" and better understand their God.

Raziel's fellow angels were deeply disturbed by this, and thus stole the book from Adam and threw it into the ocean. God Himself decided not to punish Raziel, but instead retrieved the book by means of the angels Rahab and Raphael and returned it to Adam and Eve.

Later, the book was passed on through the generations to Enoch (who believed to have later become Metatron), who may have incorporated his own writings into the tome. From Enoch, the Archangel Raphael gave it to Noah, who used the wisdom within to build Noah's Ark. The Book of Raziel was said to have come into the possession of King Solomon, and a number of texts claiming to be this volume have recently appeared.

Magdalena Lazarus, a descendant of Lady Lazarus, once summoned the angel Raziel to stop Adolf Hitler's war machine (whom was created by with the assistants of the demon lord Astaroth), and sets out on a quest to locate his lost book.

His legend is said to be similar to the story of Prometheus from Greek mythology after he introduced fire to mankind. 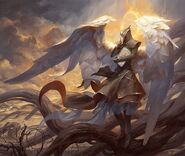