Gods and Demons Wiki
Register
Don't have an account?
Sign In
Advertisement
in: Races, Death, Spirit,
and 3 more

The Reapers are the creations and servants of Death and the counterpart of the Gifters.

The Reapers assist in maintaining the Natural Order and are completely neutral, aligned with neither Heaven nor Hell. Reapers are required for death to occur, they wait until a person meets the end of his or her life (either through accident, or simply the natural end point of that person's life) and then touch the person causing them to die. All Reapers serves Death no matter what but some may also serve Chthonic Gods, like Hades, due to their connection with the concept of death.

Reapers are completely neutral beings, not caring for deals, fate or even each other at times, all they care about is maintaining the "Natural Order" of life and death. Although sometimes uncaring, Reapers generally sympathize with their victims, but refuse to make allowances, regardless of who or why.

Reapers are also impartial in other ways, and rarely interfere in any manner other than performing their duties, and although they have the power to, they do not kill people before their time. However, there is one possible account of a Reaper ignoring the Natural Order, when that one Reaper who had been bound was freed, he quickly turned on and killed the person who bound him. This is the only known occasion of any Reaper ever being the cause of a person's death. As the person in question had forced the Reaper to go against the natural order by taking those in the place of others whose times were up, this can be an exception.

Reapers are seen as a collectors of souls, the messengers of the dead, and most important of all the guides that come to all mortals. It is not the Reaper's place to judge souls, nor is it the entity's role to aid or hinder mortal affairs. Put simply the Reaper's task is to appear to the dying and guide them to their final destination where they would be judged accordingly by higher powers. Reapers also generally appear when Death has other matters to attend, most notably ones that concern the balance of the Natural Order as a whole and thus requires his full attention.

It is unknown exactly how they came into existence although it is believed that they were created by Death. However, Death never confirmed nor denied this fact but all he did confirm is that Reapers follow his rules and they are the ones that are summoned by him. Reapers appear to serve as heralds of Death, for when one is on the verge of dying or is currently dying, a Reaper appears before them and awaits the arrival of their Master. Reapers can also collect souls without the need to wait for Death but this only occurs when Death gives them him approval to do so.

Although the Reapers normally come to those already dying it has been noted that on rare occasions Reapers have the power to kill someone, though the entities rarely (if ever) do this out of malice. Due to the Reapers appearing in a vaguely human form there are many tales in which these beings can be tricked or bribed into freeing a person (which is where the phrase "cheating death" likely came from). For the most part, however, Reapers were seen as unable to be reasoned with and an inevitable part of being human. 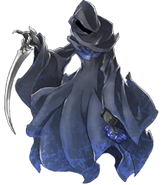 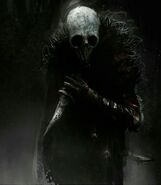