Gods and Demons Wiki
Register
Don't have an account?
Sign In
Advertisement
in: Articles that need art credits, Beings, Heaven,
and 6 more

Sariel is said to be an Archangel of death and protection who watches over the spirits that sin.

One of the newer Archangels who is "of eternity and trembling", and he is also one of the angels who look upon the bloodshed on Earth, along with Michael, Gabriel, Raphael and Uriel. He is a prince of presence and an angel of healing, like Metatron and Raphael respectively, and is one of few benevolent angels of death. His role is to watch over human souls and prevent them from sinning.

Similar to that of other angels, Sariel is seen to change his appearance at will. No matter what, Sariel always has 12 wings which are a dark silver grey in coloration.

In his human form, Sariel appears as a teenager, of an average height with short blackish-brown hair with silver eyes, and a fair complexion. He is mainly seen wearing a light grey jacket with white fur on the inside with a black shirt with a skull in the center and dark grey trousers with a silver line along the side. He is also sometimes seen wearing an orange shirt as well, however, he is rarely seen wearing this shirt as he's more into darker clothing than lighter clothes.

In female human form, Sariel appears as a beautiful young woman that usually wears high class clothing of the 1700's to 1800's that is black and dark in color. Her prim and proper outlook makes people think she is from a British Television Show, though she corrects them that she is not. With her 5' 1" height, she is one of the smaller True Archangels, her black hair is hand braided to stay out of her face at all times and her silver eyes are one of the few traits that she is proud of. She would sometimes and wears a pair of large gauntlets over her hands.

Sariel for some time had left Heaven to learn among the human race about his station, this choice made Sariel more human (similar to his older brothers; Gabriel and Michael (to some degree) than his angelic brothers and sisters. He would learn that not everything was easy in life, Sariel worked with his own hands instead of taking the easy road. This shows more morality as Sariel would protect the children of sinners while other angels will kill all of them.

Now most would expect the Archangels to be aloof and cold, considering they are of the highest orders of Angels. However this couldn't be farther from the truth for Saraqael who is scarcely capable of calling up any anger. Harm his brothers and sisters though and you will see true anger the likes the world has never seen. Other than this he is incredibly friendly, being the Angel of Death who ushers those into the afterlife, he usually puts on a kind, happy visage to show that there is nothing to fear.

Around those mortals who are still alive however, he is incredibly compassionate, always happy to help someone with their problems and make sure that they feel better even if it just takes a hug or a lot more.

As one of the True Archangels of God and one of the Archangels of Death, Sariel is extremely powerful being able to take on multiple Great Old Ones at once and can kill absolutely anything affected by Death, besides that of the other entities greater or equal to him. Even so, Sariel is extremely feared by many angels including, the Seraphim's, Cherubim's, and the Ophanim's, with many pagan gods terrified of Sariel's wrath.

In Kabbalistic lore, he is one of seven angels of the Earth. Origen identified Sariel as one of Seven Archangels who are the primordial powers under God. In Gnosticism, Sariel is invoked for his protective powers.

The book of War of the Sons of Light Against the Sons of Darkness, from the Dead Sea Scrolls, lists the name of Sariel along with Michael, Raphael, and Gabriel as names to write upon the shields of soldiers in a tower during maneuvers. He is commemorated in the calendar of the Coptic Orthodox Church on 27 Tobi in Coptic calendar. 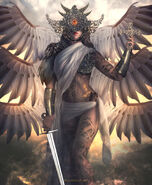 The Prince of Heaven (Art by Kevin Caberte)