Gods and Demons Wiki
Register
Don't have an account?
Sign In
Advertisement
in: Beings, Deity, Mythology,
and 4 more

Sachmis, Sakhmet, Sekhet, Sakhe, Mistress of Dread, Lady of Slaughter, She Who Mauls, Before Whom Evil Trembles, Daughter of Ra

Sekhmet is the Egyptian warrior goddess of healing, fire, dance, and love.

Sekhmet was considered the daughter of the sun god, Ra, and was among the more important of the goddesses who acted as the vengeful manifestation of Ra's power, the Eye of Ra. Sekhmet was said to breathe fire, and the hot winds of the desert were likened to her breath. She was also believed to cause plagues, which were called her servants or messengers, although she was also called upon to ward off disease.

It was said that her breath formed the desert. She was seen as the protector of the pharaohs and led them in warfare. Upon death, Sekhmet continued to protect them, bearing them to the afterlife.

She is depicted as a lioness, the fiercest hunter known to the Egyptians.

In a myth about the end of Ra's rule on the earth, Ra sends the goddess Hathor, in the form of Sekhmet, to destroy the sinful mortals who conspired against him. Sekhmet's blood-lust was not quelled at the end of battle however, and this led to her destroying almost all of humanity, attacking sinner and faithful alike on her quest for divine retribution.

To stop her, Ra poured out beer dyed with red ochre or hematite so that it resembled blood. Falling for the trick, the goddess became so drunk that she gave up the slaughter and returned peacefully to Ra.

In other versions, Sekhmet grew angered at the deception and left Egypt, diminishing the power of the sun. This threatened the power and security of the world, thus, she was persuaded by the god Thoth to return and restore the sun to its full glory.

Having once unleashed her powers for the destruction of mankind, the Egyptians feared a repeat performance by Sekhmet. The Egyptian people developed an elaborate ritual in hopes she could be appeased. This ritual revolved around more than 700 statues of the goddess. The ancient Egyptian priests were required to perform a ritual before a different one of these statues each morning and each afternoon of every single day of every single year. Only by the strictest adherence to this never-ending ritual could the ancient Egyptians be assured of their ability to placate Sekhmet.

Sekhmet's name comes from the Ancient Egyptian word sḫm, which means "power" or "might." Sekhmet's name is thus translated as "the (one who is) powerful or mighty."

Daughter of Ra (Art by ANDYLOOZ) 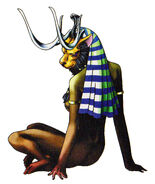