Gods and Demons Wiki
Register
Don't have an account?
Sign In
Advertisement
in: Abilities, Items, Kabbalah,
and 7 more

The Shem HaMephorash is the Explicit Name of God, rumors that it was through that Name that God created the Universe and all its army. He who is worthy to say the Name of God will gain a power of near omnipotence, though only the Children of Eden can use it.

The Explicit Name of God is a seventy-two letter long name which captures God's full essence and bestows near-omnipotence upon the speaker. It has the power to destroy and remake worlds, it was the Name that God had spoken when creating the universe, and a Name that would let the wielder defeat hell itself. Speaking it shatters the world and rebuilds it according to the desires of the speaker. But it is not without its caveats. The Messiah and Moses are the only two people who have spoken it without burning up or going mad halfway through. This is because no-one before them could see the whole universe at once. On top of this there's the issue of how Metatron, the Voice of God, would remove knowledge of the Shem haMephorash of anyone who isn't pure enough.

The most common name of the Shem HaMephorash is the famous Tetragrammaton, the YHVH or YHWH, although it is the most accessible, no one knows exactly how to pronounce it in the original Hebrew, which is a relief for many, because saying that name in an improductive way could decimate a city without wanting to.

The Shem HaMephorash 72 letter, the Explicit Name of God, is written as TREEITMTWCTSGSWRPWFBTWEACTBOSCTSBISCSBAHTCTTSCEURTWWASOGSWWIMIBSBGONTIOS (תרההיתמתוכתצגצורפופבתוהאכתבעשכתצביצכצבאחתכטתצכהורתוואצעגצווימיבצבגענתיעצ in Hebrew). When spelled out loud, it becomes TAV-RESH-HAY-HAY-YUD-TAV-MEM-TAV-VAV-KUF-TAV-TSADI-GIMEL-TSADI-VAV-RESH-PAY-VAV-PAY-BET-TAV-VAV-HAY-ALEPH-KUF-TAV-BET-AYIN-TSADI-KUF-TAV-TSADI-BET-YUD-TSADI-KUF-TSADI-BET-ALEPH-HET-TAV-KUF-TAV-TAV-TSADI-KUF-HET-VAV-RESH-TAV-VAV-VAV-ALEPH-TSADI-AYIN-GIMEL-TSADI-VAV-VAV-YUD-MEM-YUD-BET-TSADI-BET-GIMEL-AYIN-NUN-TAV-YUD-AYIN-TSADI.

He who says the Full Name of God will be able to channel the energy of the Creator Himself and become similar to Him, since the name is always intertwined with its bearer. The person who speaks God's name will become like Him, energizing within Himself all nine Sefirot, from Keter to Malkuth, becoming Adam Kadmon's earthly avatar. However the wearer becomes a God, He is still inferior to the Creator of the Technique, Yesh. Although according to Metatron, the one who bears the Name becomes an "Almost God", with the difference between God and the speaker being like a rounding error. The speaker can literally become as powerful as any other Pre-existential since His essence is linked to that of the Creator Himself - the strongest being in all existence and non-existence. 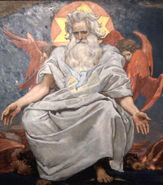 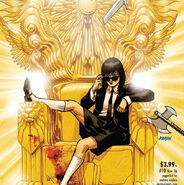 Shem HaMephorash (Hebrew: שם המפורש), meaning "the explicit name," is an originally Tannaitic term describing a hidden name of God in Kabbalah (including Christian and Hermetic variants), and in some more mainstream Jewish discourses. It is composed of either 4, 12, 22, 42, or 72 letters (or triads of letters), the latter version being the most common.

The "72-fold name" is highly important to Sefer Raziel HaMalakh. It is derived from Exodus 14:19–21, read boustrophedonically to produce 72 names of three letters. This method was explained by Rashi, (b. Sukkah 45a), as well as in Sefer HaBahir (c. 1150~1200). Kabbalist legends state that the 72-fold name was used by Moses to cross the Red Sea, and that it could grant later holy men the power to cast out demons, heal the sick, prevent natural disasters, and even kill enemies.

Johann Reuchlin (1455–1522) considered these 72 names, made pronounceable by the addition of suffixes such as 'El' or 'Yah', to be the names of angels, individuated products of God's will. Reuchlin refers to and lists the 72 Angels of the Shem Hamephorash in his 1517 book De Arte Cabbalistica.

Angels of the Shem HaMephorash

Reuchlin describes the process of generating the names thusly:

The Names of God (Art by The Living Word)