Gods and Demons Wiki
Register
Don't have an account?
Sign In
Advertisement
in: Beings, Deity, Mythology,
and 14 more

Shiva is one of the three principle deities of the Trimurti in Hinduism along with Brahma the Creator and Vishnu the Preserver.

While he is known as the destroyer, he is also considered to be a benevolent and beneficial force, as without destruction, new creation couldn't take place. He also acts against premature destruction, going far enough to withstand great suffering. He is depicted with up to four arms, a third eye, a blue throat, matted hair, carrying a trident and a drum, is often accompanied by a serpent and rides on the back of the sacred bull Nandi.

He is the husband of the goddess Parvati, or Shakti, in all her incarnations and has two sons, Ganesha and Kartikay. He also has many incarnations that would go on to become sacred figures in their own right such as Shankara and Hanuman. Shiva is also worshiped in forms born from the fusion of himself and other gods, such as Harihara when fused with Vishnu or Ardhanarishvara when he's fused Parvati or Shakti.

The first of Shiva's best known attributes is his third eye, which he once used to burn the god of love, Kamadeva, to ashes. The effulgence from this act was so hot not even the god of fire Agni could handle it and it was used to create the war god Kartikeya. Shiva also has a blue throat that was caused when he swallowed the most deadly poison in the world, Halahala, earning him the name Neelkantha (one who held poison in his throat). This act is further proof of his benevolent and self-sacrificing nature.

Shiva is known for being a responsible Second-Generation Primordial god. As as Destroyer Deity, he takes his duties with great dignity, honor, and responsible, while many fears him, many of his peers respect him for his benevolence, he is a firm believer and invoker of divine justice and fair enough to maintain balance. He hates evil, chaos, wars, and senseless violence, nor does he abides or tolerates it, he hates oath-breakers and sinful or any malicious intent, punish the guilty for committing sins without a second thought.

While he is known as the destroyer, he is also considered to be a benevolent and beneficial force, as without destruction, new creation couldn't take place. He also acts against premature destruction, going far enough to withstand great suffering. He claims that his destruction is not pure malevolent, chaotic, and evil, as he stated that his destruction only destroys what should not grow to growing (mainly evil beings or supernatural threats). He treats mortals, gods, and other supernatural beings with equal perspectives, not caring much for their social status and disposition in life. He is respectful and a gentle deity, but can be a very destructive force when provoke or angered enough, that not even Indra the King of the Hindu Gods could stop him.

Shiva can be very intelligent, cunning, and divinely wise, he is supernaturally possess wits that cannot be outsmart by anyone, other than beings with his equal power (though only few have manage to do so). He is one of the (if not few) gods that have an active influence in the Human world. He is highly worships by the humans in Hindu pantheon. He in turn is protective to them, where he will not hesitate to save them from their torment, destroy the roots of their sufferings, and give justice to the needy.

Shiva is considered as one of the strongest beings (and among the deities) in existence. Being one of the three pillar gods of Hindu pantheon, Shiva is an all powerful entity, more superior than Indra the King of the Hindu Gods. He along with Brahma, the Creator, and Vishnu, the Preserver, maintain the cosmic balance between destruction, creation, and preservation. He is also powerful and capable of rivalling some of the lesser Outer Gods and Primordials, though barely. On top of that, Shiva is also an accomplished, powerful, and a master combatant and a master of warfare, quite equal (if not greater) to that of Indra.

He originally evolved from the early Vedic god, Rudra, and is now the supreme deity within Shaivism, a branch of Hinduism that focuses on the worship of Shiva. 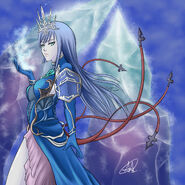