Gods and Demons Wiki
Register
Don't have an account?
Sign In
Advertisement
in: Beings, Deity, Monster,
and 8 more

Shupnikkurat, more commonly known as Shub-Niggurath, is a perverse fertility deity belonging to the immensely powerful Outer Gods. Her symbol consists of three goat heads attached at the neck with horns pointed outward to form a circular shape.

Shupnikkurat mostly takes form in the middle of dark and decadent forests, a trait which earned her the epithet of "Black Goat of the Woods." Another reason she is called the Black Goat is because many of the forms she assumes all involve her having the physical characteristics of a goat, which according to some is supposedly the bastardization of the demon Baphomet who was also known for his highly perverse rituals.

Out of all of the Old Ones, she is one of the most extensively worshiped by the most depraved heathens. They believe that should they appease her, she will provide them with her "nutrients" that will purportedly give them immortality; unaware that the sustenance she offers will in fact turn them into hideous monstrosities.

Like the vast majority of her race, Shupnikkurat's form is completely unbearable to witness by mortal eyes. She appears as an extraterrestrial, sanity-shaking immense cloudy mass and tissue with tentacles, hooves, eyes, fanged mouths and other deformities protruding from every surface. Her young are continuously spat forth from her mouths, which are either consumed into the miasmatic form or escape to some monstrous life elsewhere.

Shupnikkurat is one of the most powerful entities in Lovecraftian myths, being above Nyarlathotep himself, the son of the Chaos God, Azathoth. She exists in the Outerverse, a space of pure nothingness and chaos that transcends all conceptions of being, size and limits, which exists between the "darkness behind and among the stars". She is the Mother-of-all, having spawned countless abominations with her 'husband', the Not-to-Be-Named One. Her powers are so great that it is said that a mere glimpse of her true form can cause insanity and fear in the most powerful Archangel, with Satan himself being wary of her. Its manifestation in the physical world can be so overwhelming that it can distort the very structure of the multiverse and the root of time.

Like her kind, she was born from Magnum Tenebrosum and it is said that from the moment she manifested, she provided the Outer Gods with thousands of her young to aid in combating God and Khaos' forces. Therefore, she was a crucial target by the Arcuthas to defeat if they had any hope of succeeding. Eventually, Shupnikkurat was incapacitated and her young were destroyed before she was imprisoned alongside her race.

Despite being imprisoned, Shupnikkurat is able to assume an astral form of sorts that is capable of affecting the material plane of our reality, but only for so long. However, while her time in the physical world is limited, this allows her more than enough time to spread her young across the world. In fact, Shupnikkurat, being a fertility deity, saw to it that in order for her race to properly survive and see through the conquering of God's universe she must mate with the Great Old Ones, some of whom are her own offspring, and produce other powerful monstrous deities. 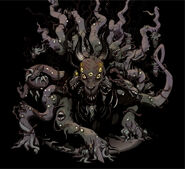 Avatars of Shupnikkurat (Art from Overlord)